For well over a decade now, the first week of November in Paso Robles on California’s Central Coast has been dedicated to the annual Paderewski Festival. Held November 2-5 this year, this year’s program featured an attractive mix of favorite local and youth performers next to world-renowned jazz and classical performers, youth concerts, a Saturday Gala recital, as well as a “Festival Fringe” orchestral concert. 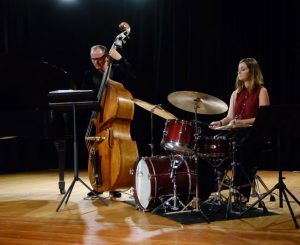 Traditionally held at the picturesque Cass Winery on Paso’s eastside, the opening Thursday night concert brought together local fans of the Café Musique ensemble, who returned to the Festival with their traditional program of Gypsy, tango, swing and folk tunes. The violinist and group’s leader, Brynn Albanese—who also serves as concertmaster for the San Luis Obispo Symphony—together with Duane Inglish (accordion), Fred Murray (bass and vocals), and Eric Willimas (guitar, ukulele, bouzouki and vocals) kept the capacity crowd happily entertained for well over an hour. 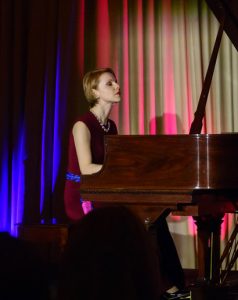 The Friday night concert at Park Ballroom in downtown Paso featured a stellar cast of performers in a program called “American Jazz Standards by Polish Composers.” And indeed, such well-known tunes as Love Letters, Stella by Starlight, Invitation, Green Dolphin Street, and Flipper were written by Victor Young, Bronisław Kaper and Henry Vars, respectively. Grammy Award winner pianist, Bill Cunliffe, was joined by Grammy nominated artists Darek Oleszkiewicz (bass) and Tina Raymond (percussion) in a program that thrilled the audience with virtuosic and insightful interpretations of these jazz classics. At the mid-point of the evening, as a special surprise, Bill Cunliffe inserted a solo segment after asking the audience for their favorite composers and tunes. He then proceeded to improvise live, mixing Chopin’s Polonaises with the biggest hits of The Doors! It brought the house down and standing ovation from the audience elicited an encore performance of Henry Vars’s sensuous Love Forgives All [Miłość Ci wszystko wybaczy], with impressive solos from bassist Darek Oleszkiewicz and tactful, supremely elegant percussion support from Tina Raymond. 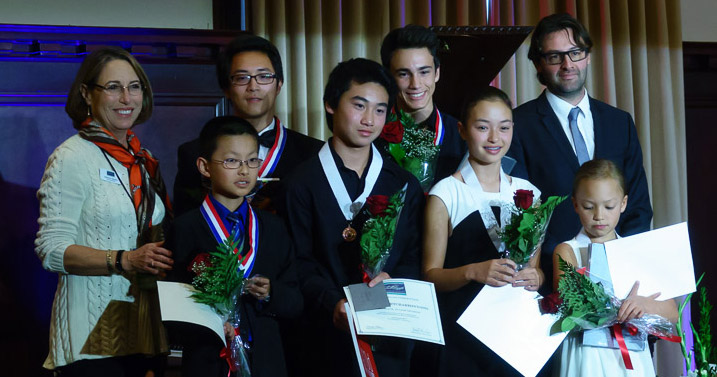 On Saturday afternoon, the Festival moved to the Paso Robles Inn, whose historic Ballroom was once an elegant dining room where Paderewski took all his meals during his stays in town. At 4 p.m. the six finalists of the Youth Piano Competition—Max Afifi, Holly Hadsall, Noelle Hadsall, Vincent Lertchareonyong, Xinyun Liu, and Andy Shen—presented a recital of music ranging from Bach and Mozart to Chopin, Liszt, Debussy and Paderewski. At the end of their concert, these winners received certificates, cash prizes, medals and gifts of books about Poland and Paderewski, presented by the Paderewski Festival Board members and Ignacy Żarski, Poland’s Consul for Culture and Public Affairs, who travelled to the event from Los Angeles. 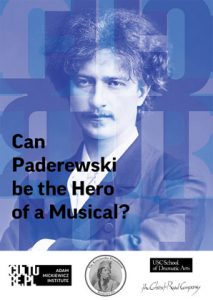 On Saturday night the Paso Robles Inn Ballroom was filled to capacity for a piano recital by Magdalena Baczewska. Her carefully chosen program of music by Chopin, Szymanowski, Paderewski and Debussy was interspersed with brief and illustrative commentary about the music. Ms. Baczewska’s poetic and delicate touch gave real meaning to the well-worn term ‘recital’ since—on this occasion—the music actually did speak to the audience. A standing ovation led to an encore of Paderewski’s Nocturne, played with uncommon sensitivity and lyricism. The evening began with introductions by the Honorable Mariusz Brymora, Consul General of the Republic of Poland and by Dr. Krzysztof Olendzki, director of the Adam Mickiewicz Institute (IAM) who introduced the audience the “Paderewski Cycle”—a project of turning the life story of this great pianist, composer, politician and humanitarian into a musical.

The last day of the Festival, Sunday November 5, began at Epoch Vineyards occupying a picturesque spot about ten miles west of Paso. Once the site of York Mountain Winery where Paderewski’s wines were processed, Epoch treasures their connection to Paderewski by cultivating a portion of the vineyard he once owned and continuing to produce excellent wines. The select audience of Festival Patrons and Friends of Paderewski was treated to a Polish-themed brunch with Epoch wines as well as to the presentation of one of the treatments of the “Paderewski Cycle” musical theater project. The librettist, composer and pianist—Oliver Mayer, Jenni Brandon and Stephanie Hutchinson—for one of the Paderewski Cycle finalist projects were joined by theater critic Jim O’Quinn and IAM’s Director Olendzki and head of theater projects, Joanna Klass. After watching a video featuring excerpts of nine of the musical finalists, the audience had a chance to hear live 3 songs from the Three Paderewskis entry created by Oliver Mayer and Jenni Brandon.

Sunday afternoon closed with a “Festival Fringe” event—a concert by the local, Symphony of the Vines chamber orchestra, led by Maestro Greg Magie. The soloists for Beethoven’s Triple Concerto were Poland’s Cracow Duo (cellist Jan Kalinowski and pianist Marek Szlezer), who were joined by local violinist Maurice Sklar. Park Ballroom in downtown Paso was filled to the brim with the audience who heartily applauded the soloists already after the Concerto’s first movement. A standing ovation at the Concerto’s conclusion led to an encore of Chopin from the Cracow Duo.

In addition to all these concerts, Ms. Baczewska gave a piano master class on Friday afternoon and, as is the Festival tradition, all concerts were accompanied by wine tasting with sponsoring wineries. Thus, Thursday night the audience had a chance to sample various wines from Cass Vineyards, the Friday jazz concert was introduced by excellent selections from Derby Wine Estates and for Saturday Gala and Sunday brunch Epoch Estate Wines provided their very best varietals and blends. The Festival is truly fortunate to have a wide range of supporters and sponsors, including—besides those wine producers already mentioned—Tablas Creek, Halter Ranch, Pear Valley and Firestone Walker Brewing Company, as well as media outlets (The Tribune and the Paso Robles Press), and such organizations as Paso Robles Rotary Club, Paso Robles Inn, Wspólnota Polska Society, the Polish-Ukrainian Paderewski Foundation, Province of Tarnów, Tarnów Regional Museumand others. Plans for 2018—the year when Poland celebrates the centenary of its regained independence—are already being drawn. And since Paderewski’s role in this historical event was seminal and crucial to its success, next year’s Paderewski Festival in Paso will certainly be a special and memorable event.