The Polish Music Center’s annual spring concert was devoted this time around to the exploration of Polish avant-garde music from the mid-1950s to the early 2000s. Works by Witold Szalonek (1927-2001), Bogusław Schaeffer (b. 1929), Henryk Mikołaj Górecki(1933-2010), Zygmunt Krauze (b. 1938), Krzysztof Meyer (b. 1943), Tadeusz Wielecki (b. 1954), and Hanna Kulenty (b. 1961) were presented at the Alfred Newman Recital Hall on Saturday afternoon, March 25. The performers for this event—gnarwhallaby—are a premiere contemporary music ensemble based in Los Angeles whose members include Matt Barbier, Derek Stein, Richard Valitutto and Brian Walsh. They specialize in repertoire written for the early 1970s Polish group, Warsztat muzyczny, an instrumental quartet composed of piano, clarinet/sax, trombone/euphonium, and cello.

The concert began with a dramatic stage entrance for Szalonek’s Improvisations sonoristiques (1968), with Brian Walsh first taking his place behind a pulpit whilst blowing, whistle-like, into his clarinet’s mouthpiece. Next came Richard Valitutto, walking briskly to the piano and instantly launching into an orgy of tone clusters that accompanied cellist Derek Stein and trombonist Matt Barbier as they filed in onto the Newman Hall stage and began playing. This “happening” was very much part and parcel of the composer’s intention and, more broadly, of the idea behind the Polish avant-garde music of the 1960s and 1970s, which sought to shake and shock the public.  New music and a thriving arts scene, where experiments of the bravest kind were eagerly consumed by eager Polish audiences, provided a stark contrast with grim socialist reality of everyday life.

The chronological spread of the repertoire provided a fine overview of the avant-garde’s rise and fadeout over the second half of the twentieth century. Schaeffer’s delicate, almost impressionistic solo piano pieces from the late 1940s and early 1950s (Dwa Utwory; Kompozycja), gave pianist Richard Valitutto (right) a chance to shine with his refined touch, admirable control and solid musicianship. A similarly peaceful, contemplative atmosphere prevailed in Krauze’s 1968 Polychromie, where the entire quartet indulged the audience in subtle shifts of pitches and soundscapes.

The remaining works on the program delivered lots of punch. Meyer’s 1970 Quattro coloriactually received its long delayed world premiere on this occasion. This intense work in five short sections explores a variety of explosive utterances of raw sounds and plays with a number of fascinating textures available to the combination of piano, clarinet, cello and trombone. Wielecki’s 1968 Tango was only slightly calmer and somewhat more traditional, paying a fleeting homage to the tradition of dance with a few sparse but elegant turns of phrase. Kulenty’s 2006 Tell me about it demonstrated the avant-garde’s about turn—in the context of other works on the program, her composition seemed almost tonal and much less rhythmically ragged. The program closed on Górecki’s intense, apocalyptic, atavistic and innocently-titled Muzyczka IV. Following his oft-favored two contrasting movements design, this composition from 1970 reaches the high water mark of Polish avant-garde, its first movement full of sound and fury, the second hypnotically receding into a post-avant-garde world of quiet contemplation. 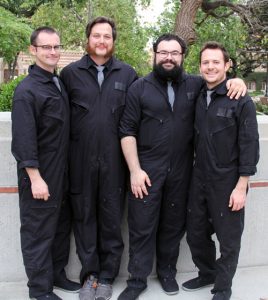 Throughout the concert, the gnarwhallaby ensemble shone with strength and concentration, displaying fierce discipline and truly admirable ensemble work. Valitutto’s cues to his colleagues from behind a concert grand Steinway kept everything together in a program of staggering complexity, and the widely-employed extended techniques inside the piano added an aura of unexpected sounds and colors from the instrument. Matt Barbier’s big moment came in Górecki’s Muzyczka, a trombone concerto of sorts, while Brian Walsh had a chance to sparkle in all of the registers available to his clarinets, featured especially prominently in the Szalonek, Meyer and Górecki pieces. Derek Stein’s cello lines often soared into harmonics, soaking sound textures with unexpected colors and timbres. It was a truly great moment to hear this rarely performed music of the Polish avant-garde and experience anew the sounds that secured a pride of place in music history of the twentieth century for a large group of brave Polish composers.