For two weeks in February, Jan Kalinowski and Marek Szlezer from the Kraków Music Academy conducted extensive research in the Polish Music Center’s Zygmunt and Luisa Stojowski Collection. On February 24, performing as the Cracow Duo, they presented a recital featuring works by Aleksander Tansman, Krzysztof Meyer, Tomasz Opałka (world premiere), and Frederic Chopin, among others. Read more from our March 2015 Newsletter. 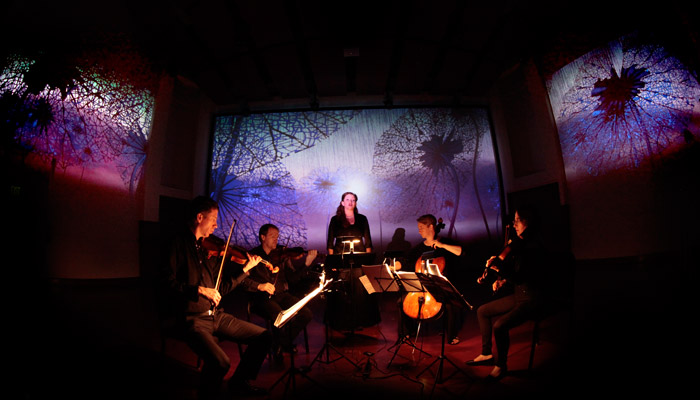 The 2015 PMC spring concert was a collaboration between the PMC, the USC Thornton School of Music’s Composition Department, and the USC School of Cinematic Arts. Entitled “Measures & Frames” and presented by Visions & Voices on March 28, the evening combined music and film, seeking to discover the hidden and serendipitous connections between these two disciplines. The audience experienced the merging of music and video imagery, created by leading composers (Joanna Bruzdowicz, Jeff Holmes, Veronika Krausas, Marek Zebrowski, and Thomas Adès) and filmmakers (Michael Patterson, Candace Reckinger, Agnès Varda, and David Lynch), and performed by the Penderecki String Quartet and soprano Rebekah Barton. Read a review in the April 2015 Newsletter.

The new Roman Ryterband Collection was started within the PMC Archives over the course of 2015, thanks to the generosity of his widow Clarissa Ryterband and his two daughters, Diana Eisele and Astrid Ryterband. The donated materials will allow for a reassessment of this fascinating composer’s contributions to Polish music history in the twentieth century, and will be celebrated with a concert at USC on April 2, 2016. For donation details, see the May 2015 Newsletter.

On May 9, the Paderewski Festival in Paso Robles presented pianist Kuba Stankiewicz and bassist Darek ‘Oles’ Oleszkiewicz at the “Jazz in the Ballroom” concert. Stankiewicz and Oleszkiewicz were joined by percussionist Kristina Raymond to play this fundraiser for the Paderewski Festival’s Youth Cultural Exchange, which sent two U.S. students to Poland in July. The concert featured music by two great Polish composers: Bronisław Kaper (1902–1983) and Victor Young (1899–1956).

The annual Paderewski Festival Cultural Exchange Program provides annual opportunities for young musicians from California’s Central Coast, Poland’s Małopolska region and the Vinnytsia region in the Ukraine to further their piano studies and perform together, as well as learn about each other’s countries and cultures. This year’s exchange, based at Kąśna Dolna in Poland, was greatly expanded to include excursions to include Radziejowice Palace, Żelazowa Wola and the Fryderyk Chopin Museum in Warsaw. Read a full recap of the 2015 here.

Adam Bala, Director of the Paderewski Polish-Ukrainian Foundation, and Marianna Humetska, Artistic Director of that organization’s “Discovering Paderewski” International Festival, visited the Polish Music Center and participated in a fundraiser for the Paderewski Festival in Paso Robles in early August. Greater collaboration between these organizations was discussed and has already borne fruit.

This year’s Paderewski Lecture-Recital was a collaboration between the PMC and the USC Thornton Baroque Sinfonia ensemble, headed by Director Adam Knight Gilbert. The program featured rarely-heard vocal and instrumental masterpieces of the Renaissance and early Baroque in Poland. In the process of researching this program, Gilbert and his Baroque Sinfonia team discovered such a wealth of exciting repertoire within the PMC library that they plan to feature Polish music on several more concerts in the next few years.

Thank you to all donors who supported our online “30 for 30” fund drive! We raised over $6,000 – doubling our initial goal, and greatly increasing the impact on our ability to serve our community of scholars, performers and lovers of Polish music. Many of those who gave were new donors, especially students whose studies had been enhanced by our vast resources, and we are so grateful to know that the work we do is impactful and appreciated. Thank you for launching us into the next 30 years of the Polish Music Center!

The 2015 Paderewski Festival (Nov 5-8) once again delivered a great variety of concerts with fascinating music, great ambiance provided by historic venues and charming wineries, and world-famous performers. As Polish flags waved over the streets of Paso Robles, this small town on the Central Coast of California was transported back to the time when Paderewski owned over 3,000 acres of land in the area and transformed both the cultural and agricultural landscape. For four days, such artists as the City of Angels Saxophone Quartet, Motion Trio, Thomas Pandolfi, winners of the 2015 Youth Piano Competition and participants in the 2015 Cultural Exchange Program delighted audiences with rich musical programs and informative spoken interludes.

The manuscript of Jan Jarczyk’s composition, The Bad Time—The Better Times, was donated to the PMC in September by Susan Mendez-Diez, Jan’s first wife.

In September, Frank Harders-Wuthenow, Promotion Executive at the distinguished publishing houses Boosey & Hawkes | Bote & Bock, sent us a large package of CDs with fascinating and rare recordings of music by Polish composers published by EDA Records—selections from that the Poland Abroad series and the En hommage series, Elegy for the Jewish villages, and Complete Piano Sonatas by Krzysztof Meyer— as well as Music by Laks, Słowiński and Pstrokońska-Nawratil (DUX 0737) 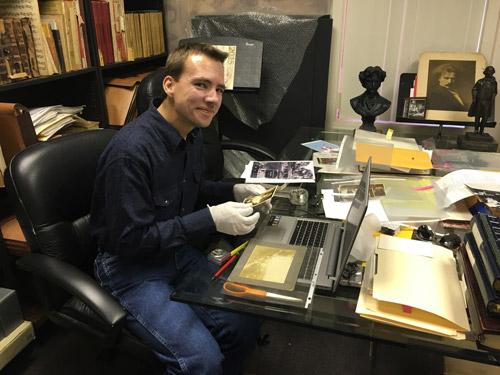 This fall, the PMC hosted a 6-week residency for scholar and archivist Robert Górski, in the latest installment in a 5+ year partnership between the Central Directorate of the Polish National Archives (NDAP) in Warsaw and the PMC. This ongoing partnership is co-funded by the NDAP, the PMC, and the Ministry of Foreign Affairs of the Republic of Poland. Mr. Górski is perhaps the world’s leading expert on the current contents and location of all of the various parts of the Paderewski that have been scattered around the world since Paderewski’s death, and many exciting discoveries were made as he worked to fit the PMC’s collection into the larger context of all extant Paderewski archives around the world.

In late November and early December, PMC Director Marek Zebrowski was in Poland and Germany, stopping in Warsaw, Pułtusk, Julin, Gorzów Wielkopolski, Kraków, Kąśna Dolna, Berlin and Gdańsk, to meet with a number of government officials and leaders of various civic organizations, as well as colleagues in music publishing, libraries, music schools and universities. Director Zebrowski’s visit was related to the PMC’s operations in Los Angeles as well as to the Paderewski Festival in Paso Robles and its Cultural Exchange Program, for which Zebrowski serves as Artistic Director.