June 29, 2016 marked the 75 anniversary of Ignacy Jan Paderewski’s death and several events were held in Warsaw to commemorate this important milestone. The first was a festive concert, held on June 14 inside the august space of Warsaw’s St. John’s Cathedral, where Paderewski’s remains were finally laid to rest on June 29, 1992 after a long interment at the Arlington National Cemetery in Washington, DC. Organized by the Polish-Ukrainian Paderewski Foundation under the patronage of the President of the Senate of the Republic of Poland, the June 14 concert featured the Lviv Chamber Orchestra led by Volodymyr Syvskhip, with soloists Krzesimir Dębski and Aneta Łukaszewicz. Ms. Łukaszewicz sang several of Paderewski’s songs that were expertly orchestrated for chamber orchestra and piano by Dębski, who was also piano soloist for this occasion. The remainder of the program featured music by Polish and Ukrainian composers, engagingly presented by the visiting Ukrainian musicians. 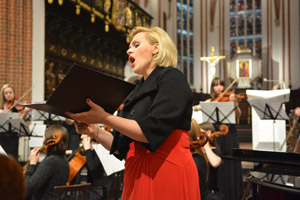 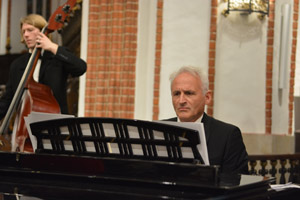 Deputy Vice-President of the Polish Senate, Maria Koc, headed the official delegation to the concert and, together with Adam Bala, President of the Polish-Ukrainian Paderewski Foundation, laid a commemorative wreath of flowers in the Cathedral’s crypt, where Paderewski is buried. Before the concert a solemn Roman Catholic mass was celebrated at the Cathedral with Cardinal Kazimierz Nycz presiding and delivering an outstanding sermon on Paderewski’s life as a musician, politician, humanitarian and Polish patriot par excellence. 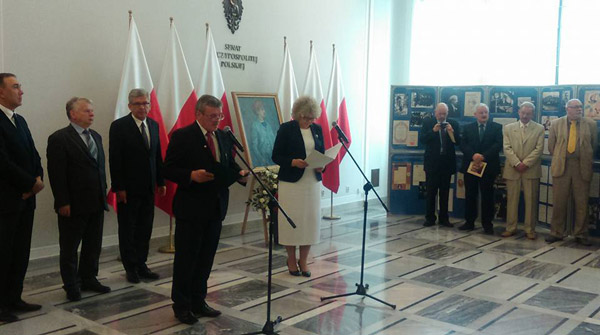 The June 15 session of the Senate of the Republic of Poland featured the unanimous passing of a special resolution commemorating Paderewski’s 75th death anniversary. This initiative was spearhead by Deputy President of the Senate, Maria Koc, and the Senate’s session was chaired by its President, Stanisław Karczewski. Both politicians graciously invited for a private meeting before the session Marek Zebrowski and Terry Tegnazian, the representatives of the Polish Music Center and Aquila Polonica Publishing who were visiting Warsaw at that time.

Following the passing of the resolution, the senators and invited guests attended the unveiling of the Paderewski exhibit in the Senate gallery and witnessed the presentation of Paderewski’s portrait by Vasyl Dutka, an artist from Ukraine who was commissioned by the Polish-Ukrainian Paderewski Foundation to produce this artwork for the Senate. Later on, President Maria Koc and Senator Anna Maria Anders (pictured at right) invited their guests to lunch in the Senate’s private dining room. 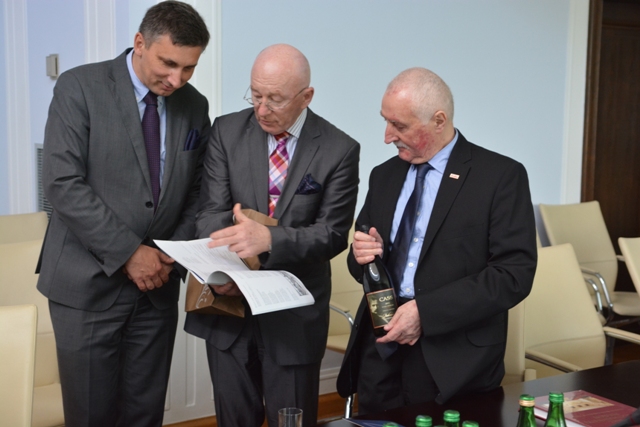 Also present at the June 15 Senate Session were Longin Komołowski, President of the Wspólnota Polska [Polish Diaspora] Societyand Marek Różycki, the Society’s General Secretary (pictured at left). Marek Żebrowski described to these important partners of the Paderewski Festival in Paso Robles the Festival’s recent history and presented Mr. Komołowski with a bottle of Paderewski Zinfandel from Cass Wines in Paso Robles. 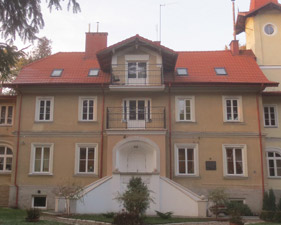 Exactly a week later, on June 22 in Łochów, a small community about one hour northeast of Warsaw, the commemoration of Paderewski’s death anniversary continued with a noontime mass at the local parish church, laying of the wreaths at the Paderewski monument and a commemorative program at the Łochów High School, which featured speeches by Senate President Stanisław Karczewski, Vice President Maria Koc, County Supervisor Krzysztof Fedorczyk and the local host, Łochów’s mayor, Robert Gołaszewski. Węgrów County has links to Paderewski through their property in nearby Julin—a large early 20th century villa that served as a school of orphaned girls, one of Madame Paderewska’s charitable initiatives. Following Marek Zebrowski’s lecture on Paderewski and a short concert at Łochów’s High School, the invited guests drove about 10 miles to Julin for a festive meal prepared by the staff of the former school for girls. This residence still serves as a home for orphaned children and is run by the county. The delicious and totally traditional Polish menu was prepared by the students and their teachers especially for this occasion. The day ended with an open-air concert near the Paderewski monument given by young pianists from local music schools.

On the exact day of Paderewski’s death, Warsaw’s elegant thoroughfare of Krakowskie Przedmieście witnessed a Paderewski Marathon that began at 2:15 p.m. with the screening of Wiesław Dąbrowski’s documentary film on Paderewski’s life and career. At 3 p.m. pianist Maciej Grzybowski performed a 45-minute recital, featuring a number of Paderewski’s early piano works. Grzybowski’s appearance was followed by over a dozen performances by students from various music schools in Warsaw and graduates of the Warsaw Music Academy, taking the rest of the afternoon and early evening hours. By 8:30 p.m. the closing event—a recital by Paweł Kowalski—capped an eventful day filled with a series of musical and visual tributes to Paderewski.

Bravo to all performers, sponsors and organizers for bringing Paderewski and his legacy to the public in Poland’s capital and the Mazovian Region!