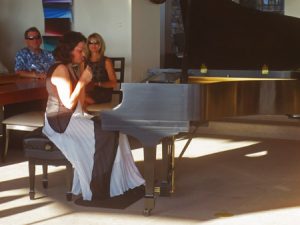 Bala, who is also director of the Polish-Ukrainian Society in Warsaw, Poland, was in Paso Robles for a “Paderewski in Paso” fundraiser weekend that benefits the Paderewski Festival’s Youth Exchange program. Under its auspices, talented young pianists from the Central Coast travel to Poland and Paderewski’s former manor house, Kąśna Dolna, for master classes, performances and history tours. Two California students and a chaperone participated in the Exchange Program this summer, while students from Poland and Ukraine are expected to visit Paso Robles during the November 2016 Paderewski Festival.

A highlight of the sold-out weekend was a piano recital by Marianna Humetska at the hilltop home of Marilyn and Ken Riding. Daniel Ha (above), who travelled to Poland earlier this summer, began the musical portion of the evening with a Chopin Impromptu, while Ms. Humetska gave a spirited reading of several of Paderewski’s piano miniatures and followed them with an assured delivery of Chopin’s monumental B-minor Sonata. After the music a multi-course dinner catered by Charlie Paladin Wayne was served and paired with wines from Enfold and Cass Wineries.

On Sunday, Marek Zebrowski, Artistic Director of the Paderewski Festival in Paso Robles and Director of the Polish Music Center at the University of Southern California, gave a lecture about Paderewski’s years in Paso Robles at Epoch Estate Wines’ historic York Mountain production facility. His lecture was followed by a tour of the Epoch’s new facilities led by Kristen Darnell, Director of Sales and Marketing at Epoch Wines and a Thomas Hill Organics wine-paired lunch at Epoch’s farmhouse. 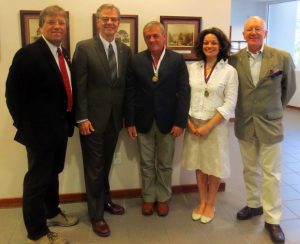 The newly-established links between the Paderewski Festival in Paso Robles and the Discovering Paderewski Festival in Lviv and the Wspólnota Polska [Polish Diaspora] organization where Mr. Bala is a board member bodes well for future cooperation between the institutions that seek to promote Paderewski’s impressive legacy. With this connection, the Paso Robles Festival’s Youth Exchange Program will have access to new venues for concerts, master classes and overnight accommodations near Warsaw, plus an opportunity to perform at the Lviv Opera in the summer of 2017. Ms. Humetska, a member of the piano faculty at the National Music Academy in Lviv, has agreed to mentor Ukrainian students from the area where Paderewski was born and liaise with the Khmilnyk Music & Arts School to select talent for upcoming installments of the mutually-run Youth Exchange programs.

At the end of their weekend visit in California, Mr. Bala and Ms. Humetska also met with Paso Robles Mayor Steve Martin and City Councilman and Mayor Pro Tem John Hamon, who underscored the City’s support of the Paderewski Festival and offered assistance in securing visas for the 2016 Exchange Program, especially for the visitors from Ukraine. At the end of the meeting Ms. Humetska and Mr. Bala were presented by Mayor Martin with specially-engraved medals from the City.