Polish Music Center is thirty years old this year. In honor of this important milestone, we have launched a month-long crowdfunding campaign. We invite PMC enthusiasts around the world to participate in our “30 for 30” fund drive, in recognition of the work we have accomplished since 1985 and in support of the projects we have planned for the future. Such future projects include expanding and digitizing our library of over 8,000 scores, 3,500 books and 1,100 recordings, and continuing to facilitate high quality scholarship and performance of Polish music around the world. Your generous support, no matter the size, will have a tremendous impact on our ability to continue our mission.

NOTE: We are very grateful to donors who helped us reach our initial “30 for 30” goal of $3000 within the first week! But the campaign continues… We challenge at least 20 from among our audience to honor Paderewski in connection with our annual Paderewski Lecture-Recital on October 18. Meeting this goal would raise another $3000 for more exciting Polish Music Center concerts in 2016! 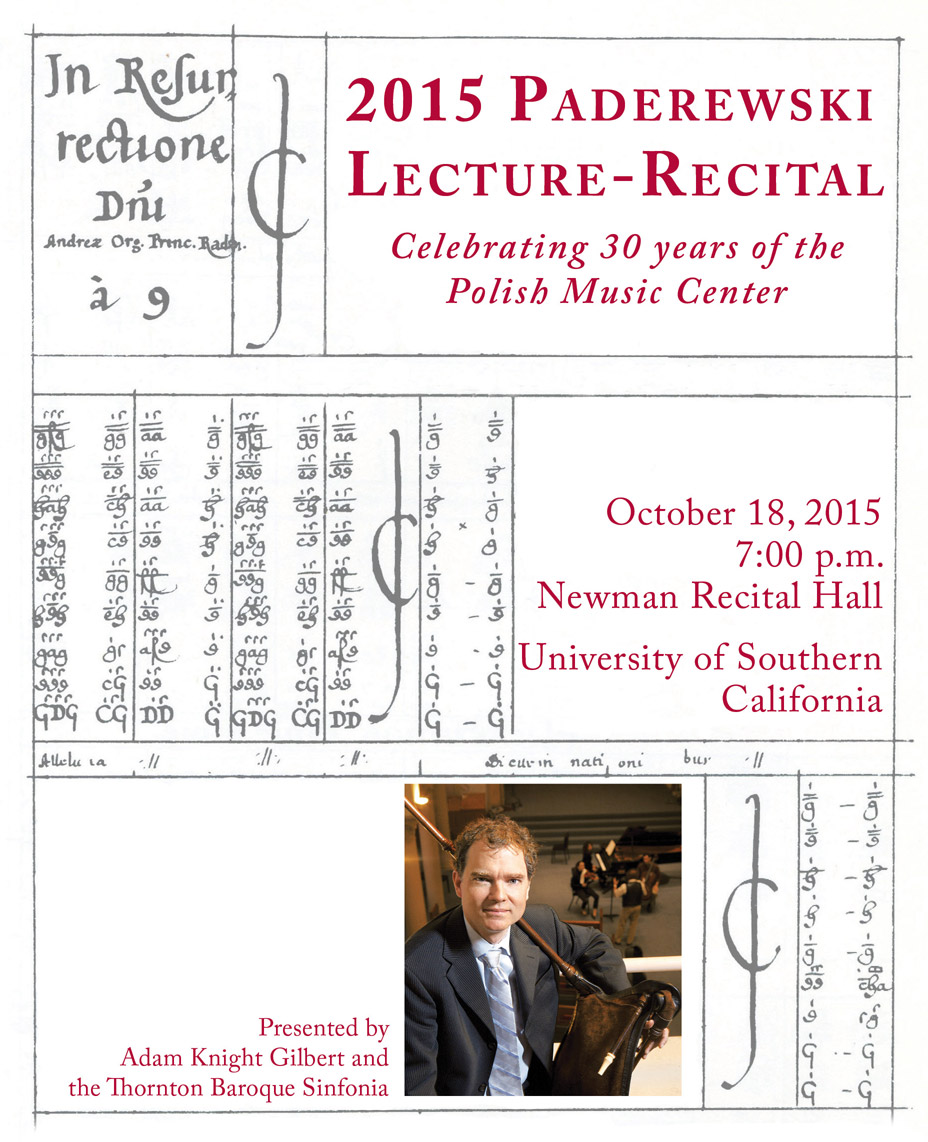 Our 2015 Paderewski Lecture-Recital is also dedicated to marking our 30th anniversary. Entitled “Musica Antiqua Polonica,” the program will feature several fascinating works from a variety of composers, and will be held on Sunday, October 18 at USC’s Alfred Newman Recital Hall. Lighter fare—instrumental dances and songs—will be interspersed with compositions to liturgical texts. Highlights will include one of the most beautiful motets in Polish literature, Już się zmierzcha [Daylight Declines] by Wacław z Szamotuł ((1520-1560), as well as vocal-instrumental works by Mikołaj Zieleński (1550-1615), Marcin Mielczewski (died 1651), and Grzegorz Gerwazy Gorczycki (1666-1734). Dances from the Tablature of Jan z Lublina (1530) as well as instrumental interludes by Jakub Polak (1545-1605), Wojciech Długoraj (1558-1619), and Diomedes Cato (1555-1628) complete the program.

Although the music of the Polish Renaissance and Baroque is less-well known today than the better-preserved music of Italy, France, Germany and the Netherlands, it nonetheless exhibits similar influences and changes of style seen elsewhere in Europe. Music-making in Poland was concentrated at first in and around Kraków, at the Wawel Castle (the original royal seat), and in various monasteries throughout the southern and central part of the country. Tomasz from Sandomierz (d. 1259) is the first Polish organist known by name; Benedicamus Domino (by an anonymous composer) is the oldest piece of Polish polyphony, dated ca. 1300.

Adam Knight Gilbert and the USC Thornton Baroque Sinfonia with a small choir and soloist will turn Newman Recital Hall into a chamber at the Royal Court at Wawel Castle in Kraków, where works by outstanding composers were once heard on a daily basis. All of our southern California friends are cordially invited to the concert. Those who cannot attend can listen to future KUSC-FM broadcasts at kusc.org or join us in celebrating PMC’s 30th anniversary on ignite.usc.edu/PMC.