The 2015 Paderewski Festival once again promises to deliver a great variety of concerts with fascinating music, great ambiance provided by historic venues and charming wineries, and world-famous performers. This year’s concert calendar begins on Thursday, November 5 with a concert by the City of Angels Saxophone Quartet. Held in the barrel room of Cass Winery, the program will feature a pleasing mix of traditional and unusual repertoire. Sax classics will be represented by the works of Percy Grainger as well as composers who first wrote for the instrument—Lew Pollack, Richard Whiting and Rudy Wiedoeft, whose 1920 work Saxophobia promises to be great fun. The Polish segment of the program will include works by Tadeusz Kosciuszko (yes, the same American Revolution hero), Paderewski (no surprise here) and Dave Brubeck (his 1958 composition, Dziękuję). And, speaking of Brubeck and jazz, the rest of the program will feature works by Vernon Duke, Harold Arlen, Rodgers & Hart and Paul Simon.

The Friday November 6 night concert at the Park Ballroom in Paso Robles will feature Motion Trio—three Polish accordion virtuosos whose brilliant concerts have conquered audiences around the world. Adding Paso Robles to their U.S. tour, the Motion trio will present a program of their own arrangements of compositions by Chopin, Lutosławski, Górecki, Penderecki and Kilar. In addition, the group’s leader, Janusz Wojtarowicz will be represented by his piece Silence, and Russian composer Vyacheslav Semyonov’s highly effective Toccata Barbaro is also on the program.

Saturday morning, as is the Festival custom, will feature a free film screening. This year’s offering is a fascinating documentary exploring the music of Henryk Mikołaj Górecki and the phenomenon of worldwide popularity of his Third Symphony. Later on Saturday afternoon, winners of the 2015 Youth Piano Competition will be featured in a free recital at the historic Ballroom of the Paso Robles Inn. 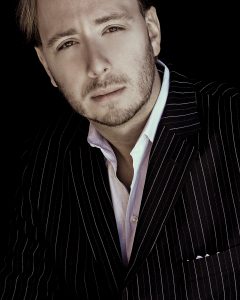 At the pinnacle of Festival events, Saturday evening will close with the Gala Concert, featuring pianist Thomas Pandolfi. The first half of Mr. Pandolfi’s program will be devoted exclusively to Chopin’s music and feature a blend of Etudes, Polonaises, and Nocturnes, with an Impromptu, Mazurkas, and Waltzes sprinkled in as well. The second half of the concert will pay homage to Paderewski with his only Nocturne and his celebrated Menuet, with the program closing on George Gershwin’s Rhapsody in Blue in a 1927 version for piano solo. Mr. Pandolfi will also give a free piano master class on Friday afternoon.

The Festival closes on Sunday, November 8, with a lecture on the history of the Paderewski Festival and piano performances by two young Central Coast talents, Daniel Ha and Kannan Freyaldenhoven. Both participated in the 2015 Cultural Exchange Program in Poland run jointly by the Paderewski Festival in Paso Robles and the Province of Tarnów in Poland. Daniel and Kannan had the amazing opportunity of living and performing in Paderewski’s former manor house in Kaśna Dolna as well as at the Jagiellonian University in Kraków, and at Chopin’s birthplace in Żelazowa Wola. They will present a short program of works they presented to various audiences in Poland last July.

In addition to concerts, a film screening and lecture, there will be numerous opportunities to taste excellent wines from Paso Robles. Starting with Cass Winery and its boutique blends of Rhone varietals to be sampled before and after the Thursday concert, Cass and Epoch wines will be featured on Friday and Saturday events. Epoch Winery are the current owners of portions of Paderewski’s former vineyards and they produce outstanding wines worthy of the great pianist’s legacy. Also, this year’s Festival will feature a new taste for audiences to try: a Paderewski Pilsner beer, brewed especially for the Festival by the local Firestone Walker Brewing Co.

A detailed schedule for the Festival is available below and at www.paderewskifest.com. We look forward to seeing as many of our friends in Paso as possible!

Concert with the City of Angels Saxophone Quartet
Cass Winery. 5:30 p.m. no-host wine reception and buffet dinner for purchase; 7:00 concert
Tickets: $10-30 or FREE for Youth under 18 and with Friends of Paderewski Pass

Concert with Motion Trio Ensemble
Park Ballroom. 6:30 p.m. wine reception; 7:00 concert
Tickets: $10-30 or FREE for Youth under 18 and with Friends of Paderewski Pass

Friends of Paderewski (FOP) passes as well as tickets to individual concerts are available at www.paderewskifest.com. Also, you can read what others are saying about the Festival in Zycie Kolorado (article by Małgorzata Cup, former Consul for Culture of the Polish Consulate General in Los Angeles) and the Paso Robles Daily News.