Held on March 28, 2015, this year’s PMC spring concert was a truly special affair. Organized as part of the prestigious Visions & Voices event series at USC, it celebrated ‘visual music’ through the juxtaposition of live musical performance and short film or animation projections. Entitled “Measures & Frames,” the concert’s goal was the exploration of the serendipitous connections made within the real-time merger of music and the moving image. The concert program featured works for string quartet by composers Thomas Adès, Joanna Bruzdowicz, Jeffrey Holmes, Veronika Krausas, and Marek Zebrowski. Each of their compositions was paired with video presentations by filmmakers David Lynch, Michael Patterson, Candace Reckinger, and Agnès Varda. The performers for this memorable evening were the Penderecki String Quartet and soprano Rebekah Ann Barton.

Held in the Alfred Newman Recital Hall, the concert began with an evocative montage of scenes from Agnès Varda’s 1985 feature film, Sans toit ni loit [Vagabond]. Once filming was complete, Varda heard Polish composer Joanna Bruzdowicz’s String Quartet No. 1 “La Vita” and decided to use the haunting music of the quartet’s second movement in her film, a poignantly-narrated story depicting the demise of a young homeless woman.  As the film was projected on a huge screen covering the entire back wall of Newman Hall, from the darkened stage the Penderecki String Quartet gently launched into the plaintive opening of Bruzdowicz’s quartet, instantly creating a magical mood for the audience. Three short movements from Jeff Holmes’s String Quartet No. 2 Kirugi followed, to the accompaniment of video images newly created for the occasion by Michael Patterson, Candace Reckinger and a group of their students from the USC School of Cinematic Arts. Varying between abstract and geometrical and semi-realistic shots of a deserted Highway 1 on California’s Central Coast, the imagery provided a new dimension to Holmes’s fluid musical statement.

Another USC composer, Veronika Krausas, was represented on the program by her midaregami, a work for string quartet and soprano in seven movements dating from 1996. Soprano soloist Rebekah Barton added a beautiful layer to the spare and rarefied string textures employed by Krausas for accompanying of poems by Akiko Yosano. Patterson and Reckinger’s videos here relied on graphic conventions from the late Meiji and Taisho era aesthetics, which complimented the overall theme.

The Patterson/Reckinger team and their students drew upon the overt literary, musical and cultural references present in Thomas Adès’s 1994 Arcadiana for their visual representations of his music. Video footage of Venice, water scenes, and dancing skeletons flowed from such movement titles as Venezia notturno, Auf dem Wasser zu singen, and Et… (tango mortale). The music itself—both dense and ethereal in turn—provided the biggest challenge of the evening for the filmmakers, performers and the audience.

The program closed with the American premiere of a 2015 animation short by David Lynch, entitled Fire (Pożar), with music written by Marek Zebrowski. In this case, Zebrowski’s accompanying Music for David was written after the animation was complete, and the inspiration that was taken from Lynch’s hand-drawn, stark black and white imagery was clear and direct. After many years of musical collaboration, the synergy between these two artists yielded an exquisite blending of tone, which was then expertly matched by the Penderecki String Quartet in perfect synchronicity with the film.

Immediately following the concert, filmmakers David Lynch, Mike Patterson and Candace Reckinger were joined on stage for a Q&A by composers Joanna Bruzdowicz, Jeffrey Holmes and Marek Zebrowski and violinist Jeremy Bell representing the Quartet. Moderated by Veronika Krausas, who was the leading team member on this complicated and exciting Visions & Voices project, the panel had a chance to share with the audience some of their thoughts on both the inspiration and the technical challenges of this particular concert. 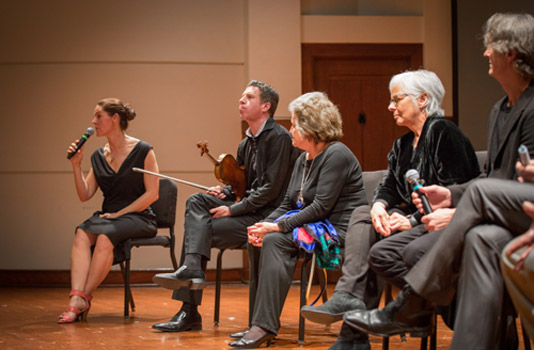 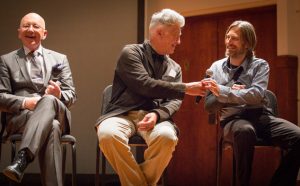 The overflowing crowds in Newman seemed to enjoy the immersive experience of hearing excellent musicians in an inspiring setting, with simultaneous video projected on three sides of Newman Hall. Being surrounded by images and music and synthesizing the experience in a live setting was certainly something one never encounters in movie theatres, and rarely at concerts. Three digital projectors especially installed in Newman for this concert were expertly run by Michael Fullman and Vartan Tchekmediyan from VT Pro Design. The entire staff of Newman Hall and of Visions & Voices, with Daria Yudacufski and Mary Megowan in the forefront, made sure that everything went very smoothly indeed. The audience—including many leading LA filmmakers, artists, and a large cross-section of USC students—will certainly treasure impressions of this extraordinary event for a long time.

For other news on this event, please see also Damjan Rakonjac’s review “Framing Measures: New Film and Music at USC” for Artificialist and Julie Riggott’s review “New music shines in the projector’s beam” for USC News.