Admission is FREE and open to the public

On April 2nd, the Polish Music Center presents an exploration of the newly re-discovered music of Polish Jewish composer Roman Ryterband (1914 – 1979). A master of the chamber ensemble, Ryterband enjoyed a career spanning half of the world before settling in Palm Springs, California. Now, an extensive collection of his personal correspondence and musical manuscripts has been donated to the PMC by the composer’s family, and we celebrate this historical gift with a concert of his works for flute, harp, piano and guitar.

This event is generously supported by the Ryterband and Eisele families, POLAM Federal Credit Union, Taube Foundation for Jewish Life & Culture, and Consulate General of the Republic of Poland in Los Angeles.

I. A Smoke Tree Dream
II. The Tahquitz Falls

The spring concert organized by the Polish Music Center at USC’s Thornton School of Music on April 2 was devoted exclusively to works by Roman Ryterband (1914-1979). An expectant crowd filled USC’s Alfred Newman Recital Hall to hear music by this lesser-known Polish composer, who spent the last twelve years of his life in Palm Springs, California.

The program of works featuring a broad selection of Ryterband’s music was chosen from an extensive collection of materials—including music manuscripts, concert programs, posters, photographs, correspondence and other memorabilia—that were donated to the PMC by the Ryterband family over the past year. In addition to the evening’s concert program booklet, a special brochure produced by the PMC highlighted Ryterband’s life and accomplishments with a catalogue of compositions and illustrations from the Ryterband Collection archive. The composer’s widow, Clarissa, and two daughters—Astrid Ryterband and Diana Eisele—were on hand with their families for this festive occasion. 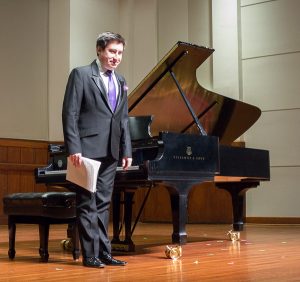 New York-based pianist Tadeusz Domanowski began the recital with Ryterband’s Three Piano Preludes (1945). Dedicated to Rachmaninov, these works explore different pianistic textures, operating within a cautiously modernist harmonic language.  Domanowski’s sensitive reading allowed the Preludes to glow with an unpretentious charm. Remaining at the piano, Domanowski then presented a selection of six dances from a ten-movement Suite polonaise(1944), showing Ryterband’s creative explorations of such staples of Polish folklore as the Polonaise, Kujawiak, Mazur, or Oberek. The audience responded enthusiastically to the music and gave a standing ovation to Mr. Domanowski at the conclusion of his segment of the program. 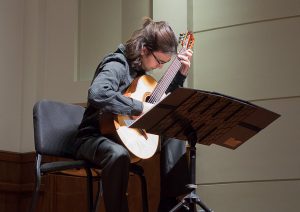 Polish guitarist Tomasz Fechner (right), a Fulbright Fellow at the Thornton School of Music, next presented the 3-movement Sonatina for Guitar(1978). This works, which was studiously pieced back together by Fechner from the manuscript and various published versions, had been performed only once before this concert. The outer movements of this lively and compact piece gave Mr. Fechner a chance to shine, eliciting warm applause from the crowd.

After intermission, harpist Ko Ni Choi and flutist Yoon Hee Jung of the duoKYaria presented Ryterband’s Two Desert Scenes (1975). Based on indigenous music of the Cahuilla Indian tribe from the Palm Springs area, this sensuous and unusual work clearly demonstrated Ryterband’s deep and lifelong interest in folk music of various regions of the world. Idiomatic and original, the second movement of the Two Desert Scenes includes the Pay-il, an Indian rattle, and a specimen of such an instrument from the composer’s collection was put to use by the versatile Mr. Fechner who assisted the flute and harp performers on this occasion. 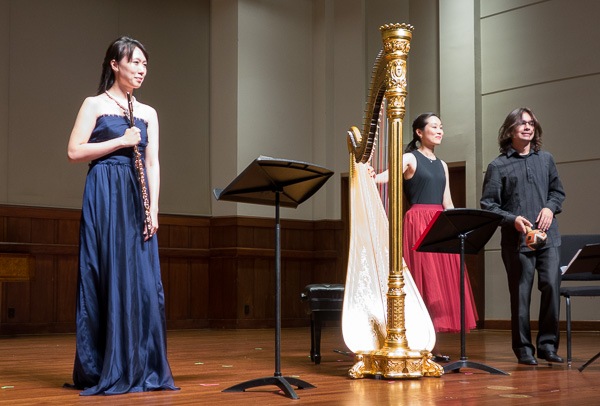 Ms. Choi returned to the stage to present Two Images for solo harp, a work dating from 1943 and written by Ryterband during his years of living in Switzerland. Written idiomatically for the harp and quite effective musically, the Two Images found a sympathetic interpreter in Ms. Choi’s skilled hands and the audience responded in kind at the conclusion of the piece.

Piece sans titre—also known as Dialogue for Two Flutes—also dates from Ryterband’s Swiss period. By placing the second flutist off stage, the work relies on an effect of repeated musical statements echoing each other. Leading the spellbinding musical dialogue from center stage, Yong-mi Choi was occasion by Yoon Hee Jung offstage. This work was recognized with the First Prize at the International Society for Contemporary Music meeting in Chicago in 1961.

The “Tribute to Ryterband” evening concluded with the world premiere of his Double Flute Quintet (above), an ambitious and strongly atonal work from 1961, where the composer successfully explored a great variety of unusual textures in an ensemble composed of two flutes, viola, cello and harpsichord. The intensity and drive of this composition were convincingly delivered by flutists Yoon Hee Jung and Yong-mi Choi together with violist Dan Fellows, cellist Coleman Itzkoff and harpsichordist Hee-Seung Lee (above). Whether in lyrical passages or inter-instrumental exchanges, the ensemble acquitted themselves superbly, nimbly navigating the thicket of densely interwoven lines and abstract harmonies. Even though the work ends somewhat abruptly and quietly, the energy of the performance inspired the listeners to give a standing ovation to all performers called on stage at the end of the concert, and marvel at the great variety of music by Roman Ryterband heard that evening.

[Photos above by Charles Bragg, Krysta Close and Diana Eisele. Used by permission]