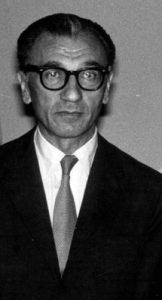 The Polish Jazz Concert presented by the Polish Music Center at USC on March 29 will showcase music written by Polish composers Bronisław Kaper (1902-1983) and Henryk Wars (aka Henry Vars, 1902-1977) after they had emigrated to Hollywood, as well as modern works by Jan Jarczyk (b. 1947). Led by pianist Jan Jarczyk, performers for this enchanting evening of jazz will include the Jan Jarczyk Trio (with bassist Dave Robaire and percussionist Efa Etorama) and the Stella Cho Quartet—violinists Hwi-Eun Kim and Jiyoung Park, violist Jason Karlyn and cellist Stella Cho.

As the first Polish composer to earn the Academy Award for the music in Lili (1953) that featured an all-time hit, Hi-Lili, Hi-Lo, Kaper (pictured at right) wrote scores for over 150 films and a great number of memorable songs. Some of them, including You’re All I Need (from the 1935 MGM feature Escapade), Gloria (from the 1960 MGM feature Butterfield 8), Blue Venetian Waters (from the 1937 Marx Brothers comedy A Day at the Races), While My Lady Sleeps (from The Chocolate Soldier, 1941), and On the Green Dolphin Street (from Lana Turner’s 1947 classic, Green Dolphin Street), will be heard at the PMC concert. 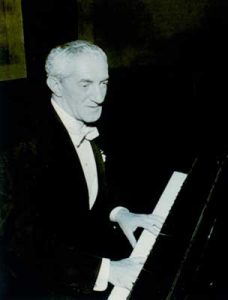 The March 29 program will also include several hits by Henryk Wars (pictured at left), including Już nie zapomnisz mnie [You’ll Never Forget Me] originally sung by Aleksander Żabczyński in a 1938 classic, Zapomniana melodia [A Forgotten Melody], and continue with Sleep My Child, a touching lullaby written in 1947 and dedicated to orphaned children all over the world. The three other Wars songs, all dating from the early 1950s, Never Say You’ll Never Fall in Love, More or Less, and I Remember, were originally introduced to the American public by such noted performers as Dennis Day, Margaret Whiting, Doris Day, and Mel Tormé.

All of the above classics will be presented in new arrangements for jazz trio and string quartet, composed especially for this concert by Jan Jarczyk, pianist, composer, and arranger and professor of music at McGill University’s Shulich School of Music in Montreal, Canada. With over twelve CD recordings, Jarczyk has performed worldwide and received numerous awards, including the Grand Prix in Lyon, France in 1974, and the SOCAN award for Best Jazz Composition during the Montreal Jazz Festival in 1999. Jan Jarczyk’s musical accomplishments were recognized by the Polish government with the Silver Cross of Merit in 2011 and with the 2011 Grammy Award nomination. 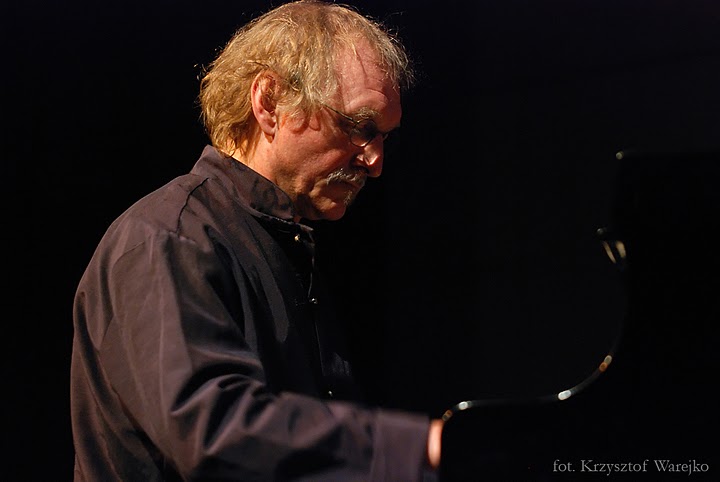 The March 29 Polish Music Concert will also feature several original compositions by Jarczyk, including There is Always Time, Round, Round and Round, Conversation Tune, and Little String Quartet No. 1, among others. With this selection of works by one of numerous contemporary Polish composers who embraced the genre, we can satisfactorily conclude that Polish jazz not only thrives but also serves as a guiding light for jazz musicians around the world. The following quote from Michael Keefe, a noted American critic, sums it up well:

While America waits for the next big thing in jazz, they should turn to the east, to Poland, a country that has been making consistently great music for 40 plus years. It is criminal that American jazz fans are so completely unaware of this music. If you are expecting some sort of abrasive free blowing or watered down post-bop, you are in for a big surprise. This music encompasses every genre of jazz, even genres that don’t exist. Regardless of the style, this music is never, never pretentious and has more soul, whether it’s Slavic soul or whatever, than what is passing for jazz in the States. The Polish version of jazz is as pure as music can be. It is not blending different types of music, i.e., jazz, ethnic folk, classical to create some kind of hybrid; it is a totally seamless combination of sounds based on the love of creative music and the joy that the music bestows on the listeners. In a nation with such a turbulent recent past, it is hard to imagine that these extraordinary musicians devoted themselves to this music for any reason other than love of jazz. […] Polish jazz could make “jazz” popular music again in America, if only Americans had the chance to hear it. (From the liner notes of The Best of Polish Jazz – 2 CDs, 2005)

The music on the Polish Music Center’s March 29 concert returns to the limelight two distinguished Hollywood composers, whose importance in the history of Polish music is certainly unquestionable. Bronisław Kaper (1902-1983) and Henryk Wars (1902-1977), quickly rose to fame in Europe in the 1930s with their popular theatre and cabaret songs and successful film scores. Both settled in Los Angeles—Kaper in 1935, Wars in 1947—and continued their careers here. Bronisław Kaper was the first Polish composer to receive the Academy Award in 1954 for the hit song, Hi-Lili, Hi-Lo, from the film Lili with Leslie Caron. Henryk Wars (known as Henry Vars in America) scored the hit adventure feature, Flipper, as well as a number of Westerns for John Wayne’s production company.

Selections from some of the best-loved songs by Kaper and Wars will be performed tonight in new arrangements by Grammy-nominated jazz pianist and composer, Jan Jarczyk, whose own compositions will close the program. Led by Jarczyk, performers for this enchanting evening of jazz will include the Jan Jarczyk Trio (with bassist Dave Robaire and percussionist Efa Etorama) and the Stella Cho Quartet—violinists Hwi-Eun Kim and Jiyoung Park, violist Jason Karlyn and cellist Stella Cho.

The Jan Jarczyk & Friends Polish Jazz concert on 29 March, 2014 at the Alfred Newman Recital Hall was a unique and eclectic mix of classical jazz and string quartet music.  String quartet is not typically associated with jazz, either classical or contemporary, but it worked quite well in these compositions by Bronisław Kaper, Henryk Wars, and Jan Jarczyk.  Jazz in Poland has been firmly established since late 1920s, when it became very popular and fashionable—and it remains so to this day. Henryk Wars and Bronisław Kaper, both born in Poland in 1902, eventually settled in Los Angeles and began successful careers in the music and film industries. 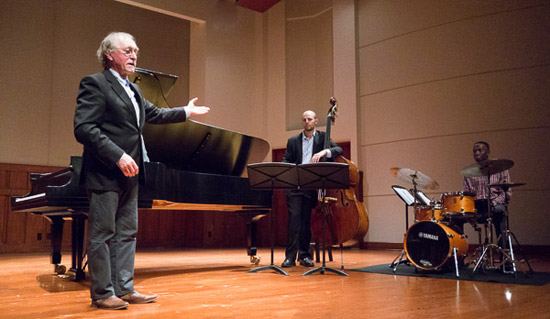 Mr. Jarczyk, who resides in Montreal, was joined on stage by two very talented local musicians: bassist Dave Robaire and percussionist Efa Etoroma Jr.  Most of the evening’s selections also included the Stella Cho String Quartet—four outstanding young Master’s Degree USC students, including violinists Hwi-Eun Kim and Ji Young Park, violist Jason Karlyn, and cellist Stella Cho. Despite the fact that Mr. Jarczyk arrived in Los Angeles just days before the concert, the transitions between the jazz trio and the string quartet were smooth and well-rehearsed. 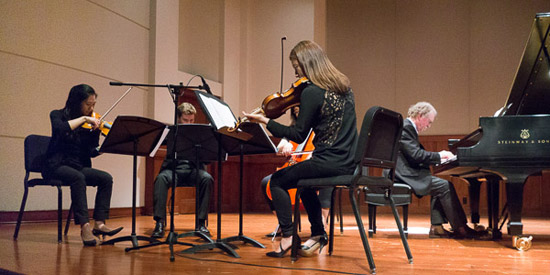 The program featured some of Henry Wars’ classics, such as You’ll Never Forget Me and Never Say You’ll Never Fall in Love, as well as some of the better-known tunes by Bronisław Kaper: Blue Venetian Waters and While My Lady Sleeps.  I particularly enjoyed the sweet, soothing sound of cello solos performed by Stella Cho in these compositions.

Jan Jarczyk, celebrating his 66th birthday this year, closed the concert with some of his own works, such as There is Always Time and Round, Round and Round. His performance proved that the Polish jazz is as pure as jazz can be.  Combining typical jazz elements, i.e. piano, bass, and percussion with classical instrumentation of a string quartet introduced Slavic soul into the concert. Listening to the string quartet somehow reminded me of classical Polish music since there were a number of musical elements typically found in Polish compositions. 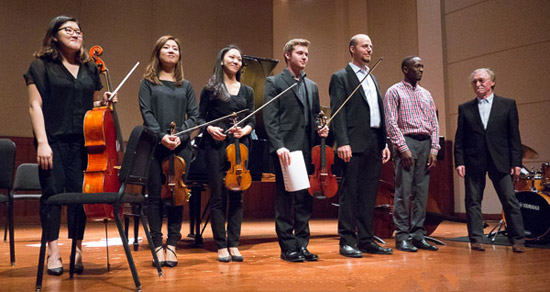 My only regret to the wonderful evening was that despite vigorous applause, Jan Jarczyk and his ensemble did not come out for an encore!  There was, however, an opportunity to meet the performers during a reception that followed this delightfully relaxing, soothing, yet energizing performance.   Thanks to the Polish Music Center at USC for making this concert possible!