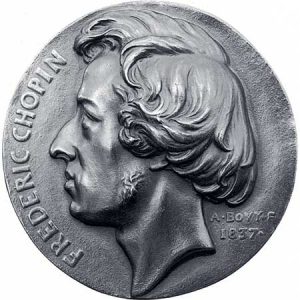 This month marks an important anniversary in the history of Polish music: two hundred years ago on March 1, Fryderyk Franciszek Chopin was born in Żelazowa Wola near Warsaw. Chopin’s father, Nicolas, was a French national who had immigrated to Poland, settled there, and became a devoted Polish patriot who fought in the Kościuszko Uprising. Chopin’s mother, Justyna Krzyżanowska, was a relative of the Skarbek family who lived in their modest village manor house where Chopin was born. The Skarbeks hired Nicolas Chopin as their French tutor.

Frédéric Chopin (the spelling which he used throughout his life) was a precocious child who began to compose when he was seven years old. By that time the family already lived in the center of Warsaw on the fashionable Krakowskie Przedmieście Boulevard. First tutored at home, Chopin then attended the Warsaw Lyceum and later studied at the Warsaw Conservatory. Remarkably, Chopin had only two music teachers. The first, Adalbert Żywny, was a violinist with whom Chopin studied for six years. Sensing extraordinary gifts of his young pupil, Żywny allowed Chopin’s talent to develop naturally by introducing him to the music literature canon of Bach and Mozart. Józef Elsner, a noted composer, was Chopin’s second teacher who took over from Żywny—first as a private tutor, then as Chopin’s professor at the Warsaw Conservatory. 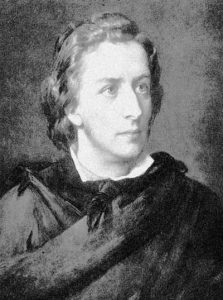 By the time Chopin was fourteen, he already had a catalogue of a few Polonaises, a Military March and a Mazurka. His first published work, Rondo in C minor, Op. 1, dates from 1825, when he was fifteen; his last composition, the Mazurka in F minor, Op. 68 no. 4 was written in 1849, the year he died at the age of thirty-nine. During the period of almost twenty-five years devoted to composing, Chopin produced some of the most beautiful and enduring repertoire that remains without doubt the highest achievement of Romantic-era piano music. As a result, Chopin occupies a truly unique position in the history of music: his ground-breaking opus is at once revolutionary in its treatment of melody and harmony and its discovery of distinctive piano textures, as well as classical in the sense of the supreme perfection of form and content that inhabits all of his music.

Chopin’s singular dedication to the piano—the instrument he understood intimately and played like no one else before or since—is among the greatest assets of his legacy. He was quite conscious of his ability to compose for this medium and thus was able to give free reign to his creative imagination. The luxurious sounds and coloristic effects Chopin drew from the piano inspired his contemporaries, left his public spellbound, and served as the foundation of music written by composers who followed him decades later, well into the twentieth century. Liszt’s account of Chopin’s importance as a composer is worthy of quoting; the two were friendly in Paris and Liszt genuinely admired Chopin’s refined style and exceptional virtuosity. He also understood that Chopin’s music pointed towards the future:

In making an analysis of the works of Chopin, we meet with beauties of a high order, expressions entirely new, and a harmonic tissue as original as erudite. In his compositions, boldness is always justified; richness, even exuberance, never interferes with clearness; singularity never degenerates into uncouth fantasticalness; the sculpturing is never disorderly; the luxury of ornament never overloads the chaste eloquence of the principal lines. His best works abound in combinations which may be said to form an epoch in the handling of musical style. Daring, brilliant and attractive, they disguise their profundity under so much grace, their science under so many charms, that it is with difficulty we free ourselves sufficiently from their magical enthrallment, to judge coldly of their theoretical value. Their worth has, however, already been felt; but it will be more highly estimated when the time arrive for a critical examination of the services rendered by them to art during that period of its course traversed by Chopin.1

The legacy of Chopin covers many themes, with the Polish national spirit felt most strongly in his Polonaises, Mazurkas, and Ballades. Chopin’s Nocturnes, as well as his Berceuse and Barcarolle are examples of unparalleled romantic piano literature where beauty of sound and intimacy of experience strike a chord in every listener’s heart. Chopin’s Etudes and Preludes are essays that speak to Chopin’s pianistic prowess and poetic inspiration. His Impromptus and Waltzes dazzle with their elegance, dash and spontaneous flow of exquisite musical ideas. The three piano Sonatas and the monumental Cello Sonata chart the development of Chopin as a composer, from a student of classical forms in Professor Elsner’s class to a fully mature artist who charted the course of music well into the twentieth century. The two piano Concertos and his shorter works for piano and orchestra remain the mainstay of concert repertoire to this day.

A sampling of Chopin’s catalogue of compositions will be presented to the public on 27 March 2010 at Newman Hall on the University of Southern California campus. In conjunction with the Thornton School of Music, the Polish Music Center is organizing a Chopin Marathon that will feature faculty and graduate students performing a variety of solo and chamber music repertoire. In addition to the two piano sonatas and the Cello Sonata, lesser-known piano works and chamber music (including selections of Chopin’s beautiful songs) will be presented. The music will be heard in four approximately 50-minute segments with intermissions between them, allowing for the public to hear Chopin’s music a la carte. The admission is, as always, free, and on a first come, first served basis. Come celebrate this wonderful anniversary with us!

Most of the audience who attended the Chopin Anniversary Marathon at USC on March 27th stayed for the entire 4 1/2 hours, and with good reason. The enthusiastic and talented students of the USC Thornton School of Music put on an excellent show. We heard pianist Vladimir Khomyakov’s interpretation of Chopin’s Opus 1 Rondeau, published when he was only 15, and the last work to which Chopin gave an opus number, the Sonata for Piano and Cello, Op. 65, in an impressive performance by pianist Angela Cholakyan and cellist Xian Zhou. We heard pieces rarely performed in America, such as 6 of his 19 Songs, performed beautifully by mezzo-soprano Sara Staples and pianist Aurelian Eulert, and a Rondeau for two pianos, played by pianists Aurelian Eulert and Sara Sumitani. It was an ambitious program too, including many major works such as: two of the four piano Sonatas, performed by Hsiao-Hsen Shen and Minji Noh; the first two of the four Ballades, performed by Alice Kyungsun Yoo; and two of the four Scherzos, played by Keenan Reesor and Angela Cholakyan.

While it was nice to hear old favorites, it was invigorating to hear Chopin that was new to these ears, particularly the Songs and the Rondeau for two pianos. People today treat Chopin’s music as if he were old hat, or at least simply a member of the musical establishment. We forget how innovative he was in blending classical form with his own ideas about harmony and melody, and how this style became a model for future composers. As I listened to that Rondeau I was very much reminded of Rachmaninoff’s 2nd Suite for two pianos, written 73 years later. Giants stand on the shoulders of giants.

One cannot give a detailed review of each performance when there were 13 soloists and duettists and 26 works performed. The important thing is that all of the musicians gave Chopin his due; more than a few times reached the point where the audience stopped hearing the virtuosity and heard only the poetry in the music. And with only two exceptions, these were all students, albeit many with experience in public performance and multiple awards already to their name. 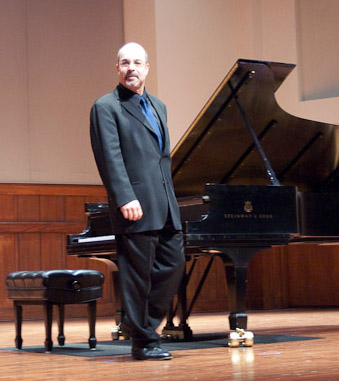 Those two exceptions should be noted. Norman Krieger (pictured at right), associate professor of keyboard studies in the Thornton School, positively ripped the lacquer off the Steinway with the Etude in C Minor Op. 10 no. 12, commonly referred to as the “Revolutionary” Etude. He followed it with the equally difficult but more artistically demanding Etude in A-flat major, Op. 25 no. 1, or the “Aeolian Harp” Etude, giving us both fire and poetry. Marek Zebrowski, who as director of Polish Music Center had enough to do organizing the program, also filled in at the last moment and played three Mazurkas from Op. 41 as a replacement for the Mazurkas from Op. 33. Otherwise there would have been no mazurkas on the program, and that would have been a shame. Of all the forms that Chopin raised to high art, the mazurkas have the humblest origins—the folk dances from the region where he grew up, and it was a mazurka that was the last composition he wrote.

Charles Bragg is a native of Los Angeles as well as a life-long supporter and intermittent student of classical music. He was awakened to the existence of Polish music beyond Chopin when the college chorus he joined sang the Szymanowski Stabat Mater, which he still considers one of the most beautiful pieces of music ever written. He and his wife Alice are PMC Friends of Polish Music as well as volunteers for the LA Philharmonic and the LA Opera.