Paderewski Back In Los Angeles!

From October 2007 PMC Newsletter
By Marek Zebrowski and Krysta Close

After an absence of eighty-four years, Paderewski’s towering figure once again graces the campus of the University of Southern California. On 22 February 1923, Paderewski was recognized at a special ceremony with the honorary doctorate by this prestigious university. At 5 p.m. on 4 October 2007, the official unveiling of the Paderewski monument took place at USC, in front of a crowd of 200 patrons of the monument project, university officials, and other guests. The Ambassador to the United States, His Excellency Janusz Reiter, and the Consul General of Los Angeles, Hon. Paulina Kapuścińska, represented Poland’s government on this distinguished occasion. The First Lady of Poland, Maria Kaczyńska, the project’s honorary patron, was unable to attend the unveiling due to a commitment to the Paralympic athletes competing in Shanghai, China. USC officials, including the Dean of Music, Robert A. Cutietta, and the University Provost, C.L. Max Nikias, also attended the ceremony and gave touching tributes to Paderewski’s legacy at the University and in the world. Musical accompaniment for this festive occasion was provided by the Midnight Winds, including a performance of Paderewski’s most famous composition, the Menuet Op. 14 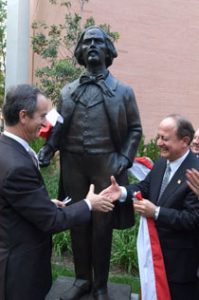 At 6 p.m. , immediately after the ceremony, the annual Paderewski Lecture-Recital was presented at the Alfred Newman Recital Hall on the USC campus. This year’s program celebrated the musical opus of Krzysztof Meyer, one of the most prominent Polish contemporary composers. Although the composer was unable to join us due to a last-minute denial of his US Visa, his presence was felt through the music, so touchingly and skillfully performed by some of Southern California’s greatest musicians. On the program was Paderewski’s Nocturne Op. 16, No. 4 (Wojciech Kocyan, piano), Meyer’s Sonata per violoncello e pianoforte (Laśzló Mezö-Arruda, cello and Mary Au, piano), Meyer’s Canzona for Cello and Piano (Lars Hoefs, cello and Jan Bratoz, piano), and Meyer’s String Quartet No. 12, Op. 103 (Armen Derkevorkian & Ely Karr, violins, John Stultz, viola, and Sheng Zhang, cello).

The unveiling of the Paderewski monument at USC marks a very important milestone for the Polish community in Southern California. Paderewski is the first Polish national to be recognized with a monument in this part of the world. His links to the West Coast are considerable, as he owned huge tracts of land in the Paso Robles area, where he planted zinfandel grapes and almond tree orchards. More importantly, Paderewski’s patriotism, incredible generosity, years of tireless efforts and considerable self sacrifice, secured Poland’s freedom after World War I. It is very gratifying that in recognition of Paderewski’s role in Poland’s modern history many individuals and institutions have come together to support the initiative of placing Paderewski’s statue at the USC Thornton School of Music. The Polish Music Center, along with our fundraising partners—the Consulate General of the Republic of Poland in Los Angeles, Polish American Congress, Polish American Historical Association, and Polish National Alliance—gratefully acknowledge the generosity of the Polish American community in this endeavor.