Portrait Of A Musician

Opening of the Exhibition, Paderewski: Portrait of the Musician at the Alfred Newman Recital Hall Gallery, USC Campus, September 17, 2002. The exhibition, culled from the PMC collection and curated by Maja Trochimczyk and Ljiljana Grubisic, presents photos, manuscript letters, programs, recordings, books, scores and various other memorabilia associated with the Polish composers and statesman. On display until January 23, 2003. For more information about Paderewski, see two issues of the Polish Music Journal, vol. 4, no. 1 and 2, 2001.

The Paderewski Exhibition also visited the Los Angeles County Arts Open House on 5 October 2002, along with a display of Polish folk dances by the Krakusy ensemble.

The “Paderewski: Portrait of a Musician” Exhibition was on display at Alfred Newman Recital Hall Gallery, USC, Los Angeles, from 17 September 2002 to 31 May 2003. Culled from the extensive collection of materials held at the Polish Music Center at the USC Thornton School of Music, this exhibition chronicles the life and career of Ignacy Jan Paderewski, the musician – statesman who received an honorary doctorate from USC in 1923. Throughout his musical career Paderewski was actively lobbying for Polish independence; he collected funds to benefit the country, its soldiers and the victims of the war. His campaign resulted in Poland returning to the map of Europe; he then became the first Prime Minister of Poland and the first Polish delegate to the League of Nations. Paderewski’s compositions include songs, and piano pieces, an opera, Manru (1901), and a Symphony in B minor Polonia (1907). He also edited a 20 volume anthology of music by other composers, and Chopin’s complete works. However, his main title to fame was his talent as a virtuoso pianist; his music was partly preserved on piano rolls and transferred to CDs.

The exhibition presented the composer’s historical photographs from 1890-1930s, manuscripts, piano-roll recordings from 1910s, early editions of his music, samples of his editorial work (Chopin, Century Library), concert programs from American tours in 1920-24, advertisements for Steinway, Victor-Victrola, and the Aeolian Co., as well as books and recordings on LP and CD. Californian material linked to Paderewski includes documentation about his honorary doctorate from USC (1923), programs from his Los Angeles performances, and the Paderewski Festival in Paso Robles. The Exhibition is illustrated with excerpts from Paderewski’s speeches and period writings (poetry and music criticism). It is curated by Dr. Maja Trochimczyk (PMC Director) and Dr. Ljiljana Grubisic (Director of Communications at the Thornton School of Music, Ph.D. in Russian literature).

Paderewski’s compositions include one opera (Manru to a libretto by Alfred Nossig based on a novel by Kraszewski; 1901), songs for solo voice and choir, two pieces for violin and piano, with an intense and melodic Sonata Op. 13 (1885), a handful of orchestral works, such as the programmatic Symphony in B minor, “Polonia” (1909), and two brilliant pieces for the orchestra and piano – Piano Concerto in A major, Op. 17 (1892), and the Fantasy on Polish Themes, Op. 19 (1893). Paderewski wrote over sixty pieces for his favorite instrument, piano, among them numerous miniatures and some larger compositions: the Variations and Fugue on Original Theme in E-flat minor, Op. 23 (1885-1903) and the Sonata in E-flat major, Op. 21 (1887-1903). The following comment about the Sonata, Op. 21, by a noted American music critic, Henry E. Krehbiel, could easily be applied to all of Paderewski’s piano compositions: “The themes are clearly and plastically set forth, and many of the approved prescriptions in respect of transitions and repetitions are obediently followed. The motivi used in the development portions are off-shoots of the principal melodic thoughts and unity between the parts is preserved by material as well as spiritual relationships. The modern pianoforte spirit pervades it, but brilliancy of utterance is placed in the service of the musical idea and does not exist for its own sake.”

The presence of Polish themes and motives gradually increased in Paderewski’s music over the course of his compositional career which tellingly ended during World War I, with the creation of a patriotic anthem Hej, Orle Biay [Hey, White Eagle]. This increasing outward Polishness of Paderewski’s music may have been a response to the pressure exerted on him by his Polish émigré audiences around the world, placing on his shoulders the responsibility for Poland’s future. Composing national music meant either drawing themes from national history and literature or stylizing elements of national dances and folklore. The first type of musical nationalism may be found in Paderewski’s sole opera Manru which tells the story of a tragic marriage of a Gypsy man and Polish woman, and in his programmatic Symphony “Polonia” portraying the glory and fall of the nation through its dramatic history. The dance stylizations include numerous mazurkas, krakowiaks, polonaises, obereks, and dances from the Tatra Mountains. As Henry E. Krehbiel put it, “no one familiar with the physiognomy and spirit of Polish music will fail to recognize the soul of Poland on every page” of Paderewski’s compositions. His connection to Polish folk traditions extended to include the use of Polish folk dolls for fund-raising for the Polish cause. During World War I, his wife, Helena Paderewska, sold numerous dolls of this kind and Paderewski gave them away to children after his concerts. 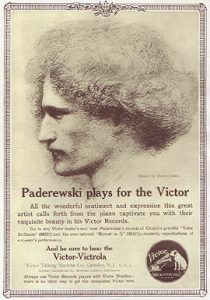 Paderewski gave thousands of concerts during his career. He toured extensively in Europe and North America, while also finding time to visit distant locations in South Africa or Australia. He mostly performed on a Steinway piano. After a period of alternating use of different pianos and a fierce competition between their makers, Paderewski signed an exclusive contract with Steinway. Traveling around the world gave the pianist an opportunity to meet Polish musicians. His friendly and supportive attitude towards his younger colleagues may be seen in the recommendation letter for Maria and Zofia Naimska, sisters and musicians from New York (associates of Marcellina Sembrich), written in 1916 and praising the “exceptional artistic ability” of these “really high-class artists” who “are certain to give the greatest satisfaction wherever engaged.”

“In all that he plays, he remains the tone-poet that he was born. Whoever hears him feels as though, in the midst of our artificial refinements, a bard had suddenly appeared from the twilight of early time, and once more opened the springs of poetic inspiration. It would be a mistake, however, to conclude that Paderewski merely follows the elementary voice of his inspiration. On the contrary, one needs but to frequent his concerts to be convinced that he is an extraordinarily experienced artist, who knows his public thoroughly, and knows by what means to seize, warm, and transport it. The arrangement of his programs, and the plan of interpretation of each separate number are masterly. The mobility of the tempos, the intensity, and the tone-coloring become a mighty force in the hands of this dramatic musician. The soul is raised to heaven by a noble chorale; suddenly a soft idyll unfolds itself before the spiritual eye, a love-duet trembles in tones sweet, hardly audible; scarcely has its quiet poetry soothed the spirit when, with boisterous song, a swarm of gay dancers storms across the stage, or thunder peals, and the deep tones of an organ vibrate in the air. All these dramatic surprises, combined with consummate art, electrify and enchain the listener.” [Alfred Nossig, The Methods of the Masters of Piano-Teaching in Europe: The Secret of Paderewski’s Playing (Century Library of Music, edited by Ignacy Jan Paderewski, vol. 18, New York: The Century Co., 1902), 610-612]

Paderewski was granted a honorary degree from the University of Southern California on the occasion of USC Commencement ceremonies held in June 1922. However the degree was conferred on him after a delay, on February 22, 1923, during a special event also commemorating President Washington’s birthday. Although renowned as a musician and composer, Paderewski did not receive the degree from the School of Music. Instead he was granted the honor of the Doctor of Law from USC President Dr. Rufus von KleinSmid. Reports about this event appeared in USC Yearbook of 1923 and in several newspapers from the Los Angeles area: the Los Angeles Times, the Los Angeles Examiner, and the USC student paper, The Southern California Trojan (today the Daily Trojan). Paderewski also received honorary degrees from the following institutions: University of Lwów (based in Austrian Poland, now Ukraine; 1912), Yale University (1917), Jagiellonian University in Kraków (1919), Oxford University (1920), Columbia University (1922), Adam Mickiewicz University in Poznań (1924), Glasgow University (1925), Cambridge University (1926), SUNY, New York (1933), and Lausanne (1933).

Paso Robles, a charming little town situated in Central California, has served as Paderewski’s resting place during his American tours since 1914. In recent years the town has become a host to a Paderewski Festival. The area is better known for its wines than music, and the Festival’s programs have typically included tours of wineries, wine-tasting and a champagne brunch, as well as recitals by Polish pianists, such as Paderewski-specialist Karol Radziwonowicz and Polish folk dance ensembles, including Krakusy and Podhale. Paderewski’s personal association with Paso Robles stems from his purchase of a vast estate that he transformed into his American home. The Rancho San Ignatio (named after the pianist’s patron saint, Ignatius of Loyola) featured a vineyard established in 1922, with the pioneering imports of Zinfandel grapes. Prizes for Paderewski’s wines include a gold medal at the 1933 California State Fair. The San Ignatio vineyard is now privately owned.

Paderewski is remembered in Central California today through the Paderewski Festival, held every fall in Paso Robles.

Too often Paderewski was seen merely as a “music-making-machine” as portrayed, for instance, in the 1893 caricature, issued for the Chicago’s World Fair. In this particular image a young virtuoso with a wild mane of hair uses his multiple arms to reach each of the keyboards that surround him to play all the pianos simultaneously , thus ending the competition for sponsorship that pitted Steinway against Weber and others. This comment underscores Paderewski’s business acumen and pianistic bravado. Yet, he is diminished to the level of a circus curiosity. Other caricatures emphasized his long hair, often commented upon because of its striking golden red hue and a great desirability among the ladies. Paderewski’s popularity among female audiences foreshadows such cults of musical “idols” as Elvis Presley. In contrast to these images, a political caricature of 1940 presents Paderewski’s patriotic side: the pianist teaches a little, homeless boy how to play Poland’s national anthem beginning with the words “Poland’s not lost, as long as we live” (Dąbrowski Mazurka). The latter image seems to have given rise to an urban legend about Paderewski’s duet with a little boy who had climbed up to the stage and started to play Twinkle, Twinkle, Little Star before the Maestro joined him in an unusual opening of one of his recitals.