The USC Polish Music Center and the Consulate General of the Republic of Poland in Los Angeles presented a Gala Concert celebrating Polish Independence Day and the donation of manuscripts by Henry Vars to the PMC. Performers for this festive concert include the USC Thornton Jazz Orchestra, Shelly Berg, director, with Guest Conductor Gabriel Alegría. The program featured a selection of the original big-band numbers written by Vars in Poland in the late 1920s and the 1930s (including the New York Times Foxtrot, the first jazz piece written by a Polish composer), hit songs from the pre-war Polish films, and songs written in the 1950s-1970s in the United States for performers such as Margaret Whiting, Bing Crosby, Mel Torme and Doris Day.

Henry Vars [aka Henryk Wars] (1902-1977) was the Polish equivalent of Irving Berlin, Cole Porter, and George Gershwin. A prolific composer of film, cabaret and stage music, he was also a conservatory-trained musician, whose symphonic works were only recently discovered in Los Angeles and given a world premiere at a festival dedicated to his music in Poland in June 2005. The manuscripts of Vars’ symphonic works, including Symphony No. 1, a three-movement symphonic suite entitled City Sketches, a Piano Concerto, and Maalot-Elegy for Orchestra, alongside numerous drafts and arrangements, are among the papers donated to the Polish Music Center by the composer’s family. A resident of Los Angeles since 1947, Henry Vars worked in the Hollywood film industry, scoring numerous motion pictures for all of the major studios. Some of his most memorable songs were recently used in Spielberg’s Schindler’s List and Polanski’s The Pianist. Vars’ score for Flipper, a film about a boy and his dolphin friend, became as famous around the world as Vars’ countless pre-war compositions that remain popular in Poland to this day, such as Miłość ci wszystko wybaczy [Love Forgives All], Już nie zapomnisz mnie [You’ll Never Forget Me] and Sex Appeal.

The composer’s widow, Elizabeth, and members of the Vars family were present at the event. The Dean of the Thornton School of Music, Dr. Robert Cutietta, the Consul General of the Republic of Poland, Krystyna Tokarska-Biernacik, and members of the diplomatic corps were also among the guests of honor.

Poland’s Independence Day and Henry Vars
The Honorable Krystyna Tokarska-Biernacik, Consul-General of the Republic of Poland 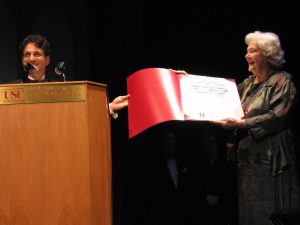 Presentation of a Certificate of Commendation
Lourdes Saab, Deputy Chief of Protocol, Board of Supervisors, County of Los Angeles

Lady with a French Poodle

Najlepiej w głowie mieć szum [The Best Is To Be Tipsy]

From the December 2005 Polish Music Newsletter

This year, Los Angeles celebrated Polish Independence Day by recognizing a common treasure of Hollywood and Poland. In honor of the donation of manuscripts to the Polish Music Center at USC from the estate of the great composer of Polish and American pop and film music, Henry Vars, the evening was dedicated to Vars’ music and the generosity of his family. This Gala event was co-sponsored by the Consulate General of the Republic of Poland in L.A. and the Polish Music Center USC and presented to a capacity crowd in the beautiful Bovard Auditorium on the USC campus at 8:00 p.m. on Friday, November 11, 2005.

The evening kicked off with arrangements of the Polish and American National anthems, followed by a discussion of the important history of Poland’s independence, delivered by the Polish Consul General of L.A., the honorable Krystyna Tokarska-Biernacik. The patriotic delivery of the music and the speech set the tone for the evening, which promised to warm the hearts of anyone who cherished Poland and her culture. The Consul General’s speech was followed by the Dean of Thornton School of Music, Robert Cutietta, who presented a stunningly hand-calligraphied President’s Commendation to Mrs. Wanda Wilk, originator and benefactor of the Polish Music Center as well as one of the greatest patrons of Polish culture in Los Angeles. In her acceptance address, Mrs. Wilk once again showed her tireless dedication to the proliferation of Polish music and culture, a sentiment which we at the Polish Music Center hope to honor in perpetuum, thanks to the Wilks’ generosity. After Ms. Lourdes Saab, the L.A. Deputy Chief of Protocol of the Board of Supervisors, presented a Certificate of Commendation to the Polish Consulate on behalf of Los Angeles County in honor of Polish Independence Day, the Consul General again took the stage. She was joined by the honorable Paulina Kapuścińska, Polish Consul for Culture, Education & Media for Los Angeles. Together, they commended Mrs. Elizabeth Vars (pictured at right with the Consul General), the widow of the composer, for her gift of manuscripts and presented her with the Amicus Poloniae award. Mrs. Vars was touched by the recognition and by the fact that her husband was being honored that night, and responded with great emotion. Robert Vars, son of the composer, also spoke on behalf of their whole family, relating personal anecdotes about life with his brilliant father.

With the completion of the official speeches, the evening moved directly into a splendid program of Henry Vars’ music. Spiced with witty commentary by conductor Gabriel Alegría, the USC Thornton Jazz Orchestra performed varied arrangements of some of Vars’ most popular songs, including Miłość ci wszystko wybaczy [Love Forgives All], Już nie zapomnisz mnie [You’ll Never Forget Me] and Sex Appeal. Despite the fact that Vars’ songs are nearly 80 years old, the young group interpreted his music with style, sensitivity, and impressive skill, enhancing the timelessness of Vars’ melodies with the excitement of modern jazz. Although the violin and the banjo are no longer commonly heard in today’s jazz ensembles, they were blended seamlessly into the Orchestra, adding an unmistakable 1920s flair. Vocal soloists Yolanta Tensor, Angela Vicente, and Matt Falker also joined the Orchestra on several numbers, singing in Polish and English. Even Marek Żebrowski, Director of the Polish Music Center and pianist, joined in the mix, delivering touching renditions of Sunrise in Manhattan and Lady with a French Poodle, two of Vars’ greatest film tunes. Between the ceremonial speeches and the lively music, both Vars and Poland were honored by this wonderful evening.