This concert is presented by the Polish Music Center in collaboration with the USC Thornton School of Music, in partial fulfillment of Gabriel Alegría’s Doctorate of Musical Arts Degree

From September 2006 Newsletter
By Marek Zebrowski

When thinking of Polish music, a few names inevitably come to mind. Chopin, Moniuszko, maybe even Szymanowski. In contemporary music it’s Penderecki, Lutosławski, and Górecki. And the concerts where Polish music is featured pretty much reflect this regrettably short list.

Of course there are many more Polish composers. The history of Polish music began in the Middle Ages, with several great musicians who were active in the ancient Polish capital of Kraków. This strong and long-standing tradition happily continues to our times, with Polish contemporary music being represented by many different composers and a great variety of styles.

Part of the Polish Music Center’s mission is to bring some lesser-known names into the spotlight. Our recent publication, Maria Szymanowska—Pianist and Composer (PMHS Vol. 9), spotlights an extraordinary woman. A divorced mother of three, Szymanowska (1789-1831) was a great virtuoso and an original composer whose works—Polonaises, Preludes, Etudes, and Mazurkas—certainly gave Chopin a head start. A friend of Pushkin and Goethe and mother-in-law of Mickiewicz, Szymanowska was a court pianist for the Russian Imperial Family. She also toured the world, garnering universal acclaim. The book’s author, Sławomir Dobrzański, not only researched Szymanowska’s life, but also recorded some of her music on a CD that is included with the book.

Another way the Polish Music Center tries to broaden the musical horizons of the general public is through the various concerts we organize—on the USC Campus, around Los Angeles, and elsewhere in California. Occasionally our programs reach across the continent to the East Coast and even overseas, with Brazil and Poland being but two of our recent musical adventures. These concerts often feature lesser-known composers whose music is undeservedly forgotten. Some of the musicians we present were very famous in their day, some died before the world had a chance to hear their music, and others just receded into history.

Programming unknown music can be a challenge. Sometimes finding the score and instrumental parts can be daunting. Rehearsals can also take much longer, since these works are not in the repertoire, and most musicians must first learn and discover how this music sounds. This process, quite obviously, does take time. For the public though, the first performance of anything should be an exciting event, awaited eagerly with much anticipation. Alas, a chance to hear something for the first time is often seen as an occasion to avoid. The unfamiliar repertoire could be a challenge, but is it?

Last March, the Polish Music Center in cooperation with the Park La Brea events featured the Midnight Quintet at a concert for the local community of residents. The choice of music for this group of USC students included—among other works—the Quintet for Winds by Tadeusz Szeligowski. This performance was certainly an American premiere, and the audience was not necessarily composed of the usual group of devoted concert-goers. Yet, this unfamiliar work received a tumultuous applause, earning the Midnight Quintet an invitation to return to Park La Brea later this year. Aside from the fact that not many Poles can recognize the name of Tadeusz Szeligowski (1896-1963), he is a completely unknown composer to an American audience. Yet Szeligowski was a fairly popular neo-classical composer who wrote numerous chamber works, concertos, and operas. In fact, when Szeligowski’s distant cousin in Poland was telephoned on the day of the concert and told about the performance in Los Angeles, California, he was overcome with emotion and gratitude for bringing back his relative’s name to the concert stage. 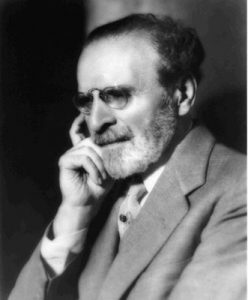 This September we’ll once again present a few more interesting premieres. On the September 7th concert at United University Church on the USC campus, two string works by Zygmunt Stojowski will open the program. Zygmunt Stojowski (1870-1946, pictured at right) was a great virtuoso pianist and composer, who lived in the United States since 1905. His manuscripts and personal papers were recently donated to the Polish Music Center. We have transcribed and edited Stojowski’s music, printing parts for each player and producing scores for the conductor. The music that until now existed only in composer’s mind and was carefully notated on century-old staff paper will get its first hearing at that concert. The September 7th concert will also feature the Concertino for Oboe and Strings by Tadeusz Kassern (1904-1957). Although the orchestral parts for the composition were found in Poland, there was no sign of a conductor’s score. A lengthy search through numerous archives and libraries finally located it at the Free Library in Philadelphia. Once all the materials were assembled here, at the Polish Music Center, it turned out that the orchestral parts and the conductor’s score had never before been lent out for performance. There were no pencil markings on the music, indicating that the work hadn’t been rehearsed. The Free Library in Philadelphia confirmed that the conductor’s score was never before checked out. As a result of cooperating with the Polish Music Publishers [ZKP] (who provided the orchestral parts) and the Fleischer Collection Librarian in Philadelphia (who provided the conductor’s score), we will finally have the world premiere of Kassern’s charming, three-movement work, in performance by a USC student orchestra assembled just for this event. 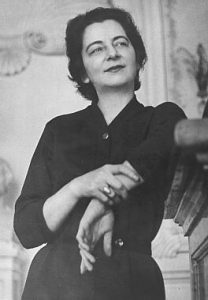 Those who did not have a chance to hear the Szeligowski Wind Quintet in March will have a chance to hear it again on September 13th. Other pieces on this program will include the Wind Quintet by Grażyna Bacewicz (1909-1969, pictured at left), another distinguished and prolific Polish composer, and a Fantasia Op. 1 for Organ by August Freyer (1803-1883), who was born in Dresden but spent most of his life in Poland. Freyer was not only a teacher of Elsner (and Elsner taught Chopin) but he also authored numerous books on music theory and singing that were used in Polish schools well into the 20 th Century. This exciting concert is a lunchtime presentation in the Music at Noon Series at the United University Church at USC.

Please consider lending an open ear to our musical offerings this Fall. Hearing anything first is a rare opportunity indeed, and it shouldn’t be missed. We’re looking forward to seeing you at as many of our concerts as you are ready to attend!