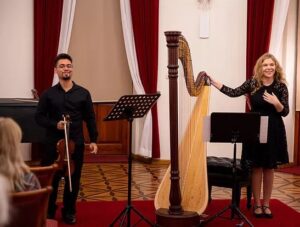 On July 25 in Cardiff, Wales, the Harplino Duet—Amelia Tokarska (harpist) with Jesse Reis (violinist)— presented an homage to Polish-Jewish composer Roman Ryterband (1914-1979) at the World Harp Congress. This Polish-Brazilian duo was created in 2017 promoting chamber music that combines musical cultures and traditions. Their repertoire includes both classical and South American music. The duo has performed at many festivals in Poland and abroad. Tokarska and Reis are laureates of the 8th International Harp Duet Competition.

Entitled ‘The Life and Work of Polish Composer Roman Ryterband,’ their recital for the World Harp Congress was held at Dora Stoutzker Hall in Cardiff and featured many works by the oft-forgotten composer. The program selection highlighted some of Ryterband’s most popular chamber masterworks: Sonata Breve for Harp and Violin, Deux Images for solo Harp and Ballades Hébraïques for Harp and Violin.

Another artist who has been promoting the works of Ryterband on the world stage is pianist Anna Kijanowska. She recently served a faculty at the Clazz International Festival in Tuscany, Italy. While there, she presented a recital program of Ryterband’s works including Triptyque contemporain for cello and piano and Song of the Slavonic Plains for violin and piano. She is also preparing a recording of Roman Ryterband’s chamber and orchestral music for DUX Records. With her deep connections in New York and Poland, Kijanowska brought together a stellar group of international artists to collaborate on the album, including the Silesian Chamber Orchestra, violinist Ania Filochowska, cellist Ari Evan and guitarist Paul Cesarczyk. The track list will include: Three Nocturnes for piano, Song of the Slavonic Plains for violin and piano, Concerto for Piano and String Orchestra, and Trois Ballades hébraïques for violin and piano.

Born in Łódź, Poland on 2 August 1914, Roman Ryterband came from a well-to-do family of lawyers and musicians. He studied law at the University of Warsaw and piano performance at the Music Academy in Łódź. Composing music already at the age of 12, Ryterband was strongly encouraged by Alexander Glazunov to pursue a musical career, which he did by performing as pianist and composer in Łódź and Warsaw during the mid-1930s.

Touring Western Europe on the eve of World War II, Ryterband was able to take refuge in Switzerland, where he worked as a manual laborer alongside other wartime foreigners interned on Swiss territory. He also completed his PhD studies of musicology at the University of Berne, indulging his passion for studying different languages and cultures, and conducting an extensive research of Slavic, Swiss, Italian, Brazilian, Indian, and Negro folk music traditions. They inspired Ryterband to write a number of works utilizing various native idioms as well as author and deliver numerous lectures and articles on indigenous music traditions throughout his life.