After a two-year delay, the USC Polish Music Center honors a transformative gift from Dianne & Tad Taube with a concert by the Cracow Duo. On March 26, this virtuoso ensemble returns to campus for a spring concert entitled California Dreamin’. Their exciting program features US and world premieres of music by Marcel Chyrzyński, Tomasz J. Opałka, Marta Ptaszyńska  and Maciej Zieliński—four Polish composers whose new works were inspired by research visits to the Polish Music Center and the inevitable sightseeing forays around Southern California. The Cracow Duo will be joined onstage by two rising stars of the USC Thornton School of Music: Espen Aas, clarinet and Zoe Beyler, percussion.

In addition to new works, the program highlights the PMC’s extraordinary Archival Collection and celebrates a transformational $2 million gift from Dianne and Tad Taube, which will allow for the digitization of the Center’s most fragile and important rare materials. In recognition of their gift, the Center’s digital archives will henceforth be named The Dianne and Tad Taube Polish Music Center Digital Archives at the USC Thornton School of Music.

The concert will be followed by a special reception honoring the Taubes and their extraordinary generosity. Please join us in celebrating this momentous occasion!

Although tickets to this event are free, RSVP is required at: www.eventbrite.com. Please also note USC’s updated ‘COVID-19 Safety Requirements for Audiences’ here. 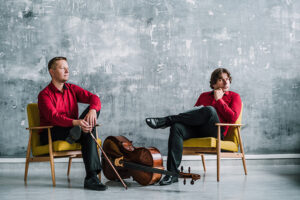 The Strad magazine wrote about the Cracow Duo: “Kalinowski and Szlezer, friends since childhood, have a wonderfully natural rapport and there is an arresting quality to their playing that gives life to the music”. They studied together in Cracow and Paris and began to perform together as the Cracow Duo over fifteen years ago. Since that time, their concerts and recordings have received the highest critical acclaim in Poland and abroad with reviews in such media outlets as Polish National Radio, Slovenski Rozhlas, Radio Suddeutsche Rundfunk and important magazines and websites such as ClassiqueInfo, Classical Music Review, Res Musica, American Record Guide, Ruch Muzyczny, Twoja Muza, The Strad and Gramophone.

The Cracow Duo has performed on the world’s most prestigious stages, including Carnegie Hall, Seoul Arts Centre, Alfred Newman Recital Hall in Los Angeles, Palacio de Bellas Artes in Mexico City, Salle Cortot in Paris, St.Martin-in-the-Fields in London and Concertgebouw in Amsterdam. They have made extended tours promoting Polish music in the Middle East (2006), Caucasus (2013), Georgia (2014), USA and South Korea (2015), Mexico (2015; 2016), Brazil and Argentina (2016; 2017),  USA (2017) and China (2018). In 2010, they represented their hometown at Kraków Days in Nanjing, China.

Cellist Jan Kalinowski and pianist Marek Szlezer share a special commitment to and fascination with music written by rarely performed Polish composers. Among their many programs, the Cracow Duo have frequently presented compositions for cello and piano by Fryderyk Chopin, Aleksander Tansman, Karol Szymanowski, Zygmunt Stojowski, Szymon Laks, Ludomir Rożycki and Tadeusz Majerski, as well as works by contemporary Polish and foreign composers written specially for them. Cracow Duo’s common artistic vision coupled with virtuosity and an extensive concert experience create interpretations that are emotional, sincere and spontaneous.

Since 2009, the Cracow Duo regularly records and releases CDs and their albums have received numerous awards and distinctions. These include Aleksander Tansman—Works for Cello and Piano (DUX, 2009), Fryderyk Chopin—Complete  Chamber Works (DUX, 2010; with Bartłomiej Nizioł, awarded French critics’ award La Clef de ResMusica and nomination for the Polish Music-lovers Award of Polish Radio Program 3), and Krzysztof Penderecki—Chamber Music Vol. I (DUX, 2014; awarded the Gramophone Editor’s Choice award). The musicians also took part in the recording of the real life song album by Joanna Freszel (DUX, 2015; awarded the Prix de la SACD). The musicians also published Dedykacje (DUX, 2014) presenting compositions written for the Duo by Kraków-based composers. Cracow Duo’s 15 years of artistic activity was celebrated with a book Spod Estrady, a series of Mateusz Borkowski’s behind-the-stage interviews with the artists, as well as the album Memories (DUX, 2016). In 2018, Warner Classics released the Polish Music Experience album recorded with the Orchestra of the Royal City of Kraków ‘Sinfonietta Cracovia’ under the baton of Jurek Dybał. In addition to many favourable reviews, Cracow Duo’s recordings have received numerous nominations for the Fryderyk Award (Polish Phonographic Industry Award) and, in 2019, they were recognized with Global Music Awards Outstanding Achievement for best duo performance in Classical Music. 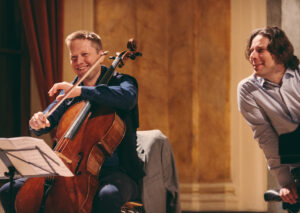 Cellist Jan Kalinowski (b. 1982) studied at the Kraków Music Academy, the École Normale de Musique in Paris and the Staatliche Hochschule für Musik und Darstellende Kunst in Stuttgart under the guidance of Professors Witold Herman, Paul Julien and Peter Buck. He has also taken part in master classes given by David Geringas, Ivan Monighetti and Arto Noras. Kalinowski has received scholarships from Polish and foreign foundations, as well as the City of Kraków, the Małopolska Region and the Ministry of Culture and National Heritage. He has recorded for radio and television, including the cello concertos of Witold Lutosławski (Lebanese National Orchestra, Azerbaijan State Philharmonic) and Marek Stachowski (Beethoven Academy Orchestra). As a soloist, he has performed under the baton of many renowned conductors, such as Rauf Abdullayev, Łukasz Borowicz, Wojciech Czepiel, Jacek Rafał Delekta, Jurek Dybał, Michał Dworzyński, Jacek Kasprzyk, Adam Klocek, Paweł Kotla, Paweł Przytocki, Daniel Rajskin, Jacek Rogala, Maciej Tworek, Alan Urbanek and Antoni Wit. He is Professor of Cello at the Kraków Music Academy, where he received his PhD in 2010 and postdoctoral qualifications in music in 2015. In 2014 DUX published an album with his project Polish Cello Music containing works by Polish composers for cello ensembles from one to eight instruments. Jan Kalinowski also recorded the Fifth Cello Suite by Johann Sebastian Bach for the Bach Society and took part in recording the Krzysztof Penderecki – Chamber Music Vol. II Violoncello Totale (DUX, 2017) album. Since 2012, Mr. Kalinowski plays a cello by Wojciech Topa.

Marek Szlezer (b. 1981) is one of the most sought-after Polish pianists. His career started with the Grand Prix at the International Piano Competition in Rome at the age of 12. He has studied at the École Normale de Musique in Paris, the Music Academy in Cracow and the Chapelle Musicale Reine Elisabeth in Belgium with Ewa Bukojemska, Abdel Rahman El Bach, Dmitri Bashkirov and Marcella Crudeli. He has held grants from Polish and foreign foundations, as well as the City of Kraków and the Ministry of Culture and National Heritage. He is a prize-winner of many prestigious competitions in Poland and abroad. His consummate performances of Frederic Chopin’s music have won him the First Prize at the National Chopin Competition in Warsaw and the special prize of the Chopin National Edition. He had the honor to play a concert on Chopin’s original piano at the Jagiellonian University on the night Poland entered the European Union. Marek Szlezer has performed in such prestigious concert halls as Carnegie Hall, Palais des Beaux Arts, Salle Cortot, Wigmore Hall, St.Martin-in-the-Fields, Alfred Newman Recital Hall and NCPA. He has performed with leading orchestras, including the English Chamber Orchestra, National Symphonic Orchestra of Ukraine and the National Polish Radio Symphonic Orchestra. He discovered the piano music of Jadwiga Sarnecka and recorded a selection of her compositions for DUX. He is the author of numerous research papers about piano works of Polish composers, published by Polish Music Publishers (PWM) and Euphonium, as well as book publications and articles about Polish music. He has recorded several albums (on DUX, EMI, Amadeus and Moderato Classics among others), which recieved enthusiastic critical acclaim in prestigious musical magazines (Gramophone, Kulturspiegel, The Strad, Pizzicato, Fanfare, and American Record’s Guide among others). He is Professor of Piano at the Kraków Music Academy, where he received his PhD in 2009 and postdoctoral qualifications in music in 2015. 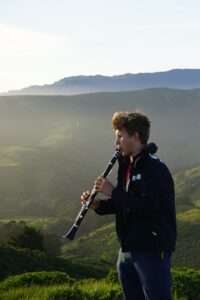 Espen Nystog Aas discovered the clarinet at the age of 6 and quickly became determined to be a professional musician. He was admitted to the young talents program at the Norwegian Academy of Music, and went on to complete his Bachelor’s Degree with prof. Björn Nyman. During his studies he was featured as a soloist in Karin Rehnqvist’s Clarinet Concerto “On a Distant Shore,” and was performing with professional enssembles such as The Norwegian Wind Ensemble, Norwegian Armed Forces Wind Band and the Norwegian Air Force Wind Band.

After graduating, Espen moved to Los Angeles to study with Professor Yehuda Gilad. Currently, Espen holds a Graduate Certificate and is pursuing his Master’s degree at the USC Thornton School of Music. He regularly performs with orchestras and chamber groups in LA, in addition to film scoring sessions and solo recitals.

When not practicing or performing music, Espen is a passionate cyclist, enjoying long rides in the Santa Monica mountains and racing for the USC Cycling team. 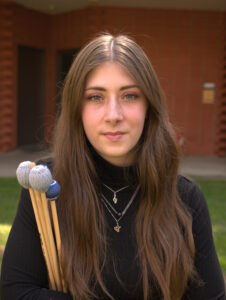 Zoe Beyler is a percussionist, pianist, and taiko (Japanese drumming) player pursuing excellence in and seeking to explore the full breadth of music and percussion across time and genres. Currently, she is pursuing her goals as a percussion student at the University of Southern California Thornton School of Music, studying with Joseph Pereira and James Babor, and as the artistic director of USC’s student taiko group, Kazan Taiko.

Beyler has a strong interest in contemporary music, and enjoys playing recently composed works with the USC Thornton Percussion Ensemble, as well as collaborating as a member of Portland Taiko with groups such as Fear No Music, Portland-based contemporary music ensemble. Together with Portland Taiko, Zoe has participated in social advocacy through performance and community events. She also has a love for music education, and is currently working with the Thornton Community Engagement Program, working with students in schools in central LA.