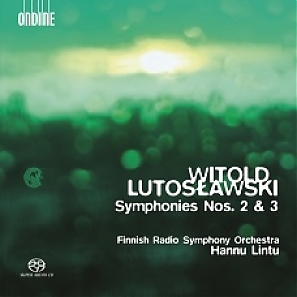 Second volume in the Witold Lutosławski (1913–1994) symphony cycle by the Finnish Radio Symphony Orchestra and its chief conductor Hannu Lintu brings together two symphonies which belong to the most remarkable symphonic creations of the late 20th century. In his 2nd and 3rd Symphonies Lutosławski is laying out the principal foundations of his creative legacy.

Lutosławski completed his 2nd Symphony in 1967. This symphony is the most radical of the composer’s four symphonies and takes full use of aleatoric writing. During the writing process Lutosławski was particularly preoccupied with the issue of symphonic form. The symphonic process is built up not of themes and how they evolve but of the dynamics between entire textures, how they meet and contrast. The movements are of roughly the same length but completely different in character. The first movement deliberately sketches out music of sporadic ideas and fragments, fostering dissatisfaction and frustration in the listener that are then dispelled by the second movement. The concept is underlined by the titles of the movements, Hésitant and Direct.

Lutosławski began sketching out his 3rd Symphony shortly after completing its predecessor. However, it took until the early 1980s when the composer was finally able to write it down. By then, the composer had already stylistically shifted towards more rich and diverse expression. This dramatic 30-minute work was premiered by Georg Solti in 1983 and undoubtedly influenced by the social unrest in Poland of the time. For many this work is the climax among the composer’s symphonies and belongs to the greatest achievements of the symphonies of our time.

This 2020 recording of Symphonic works by Witold Lutosławski has been nominated for a Grammy, the top US recording honor, as well as a host of other international awards. Below are several reviews of the SACD album:

“…Hannu Lintu and his terrific orchestra bring the same bravado and sense of adventure to Lutoslawski. The music never sounds heavy or ponderous. Listen to the snap Lintu brings to the central motif in Symphony 3 and the sense of fun in the loopy sonorities and howling brass slides in 2. He likes wit and fantasy, and thanks to the lucid recording, you can really hear the most surreal, multi-layered textures.”

“…[T]his magnificent new recording completes a strong symphonic portrait of the Polish modernist master…  [T]his is a potent and logical pairing of works both written on a two-movement scheme. Hannu Lintu conducts with lucidity and rigour in a work exploring Beethovenian notions of tension and release. His musicians respond with brilliant, punchy playing but are also capable of dazzling refinement, something vital in a work of such intricate translucence. Though the Third Symphony was composed at a time (1981-83) of great flux in Poland, indeed the period of martial law, somehow it rises above non-artistic concerns and Lintu makes a great case for its abstract richness… Lintu’s Lutosławski cycle sets a new standard.” 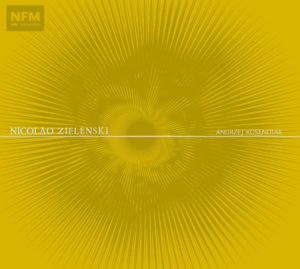 Below is a description of the process by which Andrzej Kosendiak, founder of the Wrocław Baroque Orchestra and conductor for this recording, decided up the program of the album. This message, translated by Anna Kaspszyk, is taken from the website of the publisher, CD Accord:

“We present to you another CD with the music of the First Polish-Lithuanian Commonwealth, featuring the works of Mikołaj Zieleński, his Offertoria and Communiones published in Venice in 1611. I had to make a choice among Zieleński’s 113 surviving works, so I adopted a narrative based on the history of salvation, or more precisely – the fulfilment of the Scripture in the coming of Jesus Christ – the Messiah. (…)

At the same time, I tried to show the diversity of line-ups and styles of Zieleński’s works from the 12-part Magnificat and the double choir (eight-part and six-part) works to works for solo voice, while also differentiating the instrumental line-ups, and especially the basso continuo, which is performed by two theorboes, organ, harpsichord, harp, viola da gamba, violone and dulcian in various configurations. In the vocal parts, the highest are performed by female sopranos, probably contrary to the practice of the turn of the 16th and 17th centuries.

We denied the doubtful St Thomas his voice in Mitte manum tuam by performing this duo only on instruments, believing without words in the Resurrection. The featured works by Zieleński are masterpieces of musical art of the early 17th century, withstanding comparisons with compositions of the greatest masters of the era.