This year marks the 40th anniversary of the establishment of Solidarność, or Solidarity, and the signing of the Gdańsk August Agreements. Founded in 1980 as a trade union in the Gdańsk Shipyard, Solidarity became a leading political force in the defeat of the Communist regime in Poland. Eventually the Polish government was forced to negotiate with the Solidarity-led opposition, resulting in the historical elections on June 4, 1989. This marked a crucial stage in the history of Poland and the democratic transition of Central and Eastern Europe.

The occasion of this 40th anniversary was commemorated across the world in many ways, including with the premieres of two carillon pieces by the most sought-after Polish contemporary composers. On 30 August, on the eve of the anniversary, Paweł Mykietyn‘s STOP and Elżbieta Sikora‘s Running North were performed on the Gdańsk carillons—STOP in the Main Town Hall (at noon) and Running North in the St. Catherine’s Church (at 3 p.m.).

Initially instruments of simple construction, over time carillons became more and more complex, gradually gaining the fullness of sound. According to sources, the beginnings of the Gdańsk carillon date back to the mid-16th century. Currently, carillon music in Poland is vividly cultivated in Gdańsk, which has three of these instruments installed around the city.

Both works were commissioned by the City of Gdańsk and the Gdańsk Museum, and published by PWM Edition. Both were performed by the outstanding carillonist Monika Kaźmierczak. Admission to the concerts was free. 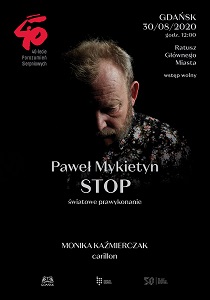 The title may express a naive but beautiful dream of the victory of good over evil. Let this dream resonate on the carillon of the Main Town Hall in Gdańsk—a city that experienced both great good, when Solidarity was created, and great evil, when its president was murdered.
—Paweł Mykietyn on STOP 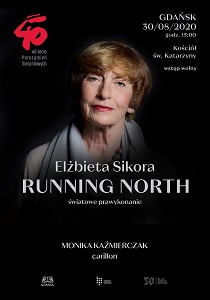 To escape from fate, from ourselves, from the plague, pestilence, war, enslavement and all evil. To the north. Where the sea opens, beyond which the unknown, freedom, tempting mystery.
—Elżbieta Sikora’s Running North