RadioJazzFM has launched the second part of its cycle of educational broadcasts, Mistrzowie polskiego jazzu [Masters of Polish Jazz], with a show celebrating music by Bronisław Kaper (1902-1983) on August 3. Although mainly remembered for his hundreds of film scores written for big Hollywood studio productions from the mid-1930 until the early 1970s, Kaper also wrote many songs that became very popular—first in Berlin in the 1920s and then in France in the early 1930s—before he emigrated to America.

Teaming up with the Austrian composer Walter Jurmann in Berlin, Kaper wrote such hits as Natacha, which topped all kinds of charts when the Comedian Harmonists—one of the original boy crooner bands—toured with it worldwide and recorded it as well. Kaper’s next international hit was the song Ninon, written in the early 1930 and interpreted to perfection in Polish, French and German by the unforgettable Polish tenor, Jan Kiepura.

By the mid-1930s, Kaper and Jurmann were in Hollywood, hired by MGM on a long-term contract. One of Kaper’s first projects was the music for Marx Brothers very successful 1935 comedy, A Night at the Opera, with a lead song, Cosi-Cosa. Kaper’s tunes began to attract attention of jazz musicians and several of his compositions—including the title song for the 1936 film San Francisco and a 1937 song All God’s Chillun’ Got Rhythm (from the Marx Brothers film A Day at the Races)—quickly became jazz standards. 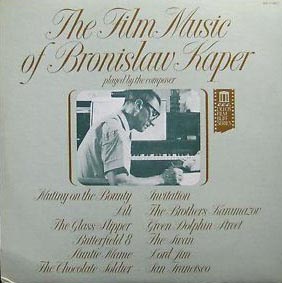 The two most enduring Kaper songs that also became a staple of jazz repertoire include the songs On Green Dolphin Street (from the 1947 MGM feature Green Dolphin Street), and Invitation (written for a 1950 melodrama A Life of Her Own and reused as title song in the 1952 film, Invitation). Kaper’s title song Hi-Lili, Hi-Lo , written for the 1953 musical Lili with Leslie Caron, brought Kaper a 1954 Academy Award.

The RadioJazzFM podcast archives contain their first series of broadcasts aired last year. They include audio portraits of such great artists as Urszula Dudziak, Andrzej Jagodziński, Krzysztof Komeda, Adam Makowicz, Jerzy Milan, Zbigniew Namysłowski, Zbigniew Seifert, Tomasz Stańko, Andrzej Trzaskowski, and Michał Urbaniak, among others. These broadcasts can be found at: archiwum.radiojazz.fm. The main site at www.radiojazz.fm will be updated with their second series of shows that began with a portrait of Bronisław Kaper this week.