Another Donation By Biblioteka Millenium

A few weeks ago we received another gift of books and sound recordings from the Millenium Library, a venerable institution connected to the Polish school operating next to the Polish parish church in the West Adams neighborhood of Los Angeles. As the school library was moving to a smaller space, last summer we were approached about accepting from them books on music as well as recordings that they could not accommodate in their new space. We were more than happy not only to help them out, but also to continue to make these resources available to students, researchers of Polish music and the general public. Being under the roof of the Polish Music Center (pictured above) will make them even more accessible and we certainly invite our public to take advantage of this new collection.

Among the new items on our shelves we would like to mention a two comprehensive studies by Marek Holzman and Marian Gołębiowski, covering the history of Warsaw’s National Philharmonic, Teresa Chylińska’s insightful book about Karol Szymanowski’s correspondence with his publishers, Universal Edition in Vienna (PWM, out of print), and Mieczysław Fogg’s memoirs, covering the heady days of the Warsaw cabarets and musical theater scene from the 1930s to the 1970s.

Our library of sound recordings gained several interesting LPs with performances by Mazowsze and Śląsk folk music and dance ensembles. Since some of these recordings were either made for export in Poland or issued abroad, titles of songs with short descriptions in English on the dustjackets will prove very helpful to those non-Poles who would like to study Polish folklore. There is also one mystery recording published in England that features songs from Lwów with a duet of performers, including Włada Majewska and J. Kropiwnicki. We also have a 2-LP album of songs from the Solidarity era, featuring a long list of leading performers in repertoire that musically defined Poles’ yearning for freedom in the late 1980s and early 1990s. Finally, we now have a beautiful, cloth-bound 14-LP set of Adam Mickiewicz’s epic poem, Pan Tadeusz, read by some of the greatest stage talents, including Aleksander Bardini, Gustaw Holoubek Andrzej Łapicki, Tadeusz Łomnicki, Wieńczysław Gliński, and others. With a beautifully illustrated booklet containing texts in Polish, French and English, this set of recordings is a perfect introduction to Polish romantic era poetry even for those who are not perfectly fluent in Polish. 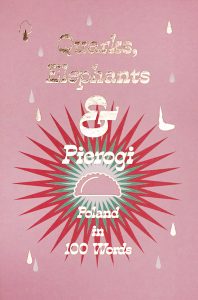 It is a daunting task indeed to describe Poland’s great and ancient culture, traditions and customs—especially for the foreigners who may be stumped as to how to even begin their research on such a topic. Thankfully, a charming volume by Mikołaj Gliński, Matthew Davies and Adam Żuławski, entitled Quarks, Elephants & Pierogi – Poland in 100 Words, has just been published and is now available from the Adam Mickiewicz Institute. With an introduction that includes a guide to pronunciation, the book launches into cleverly chosen, alphabetically arranged entries covering a wide selection of subjects. With pithy and humorous descriptions, a large area of Polish reality is surveyed, including cuisine, countryside, family, religion, travel and much besides. Readers eager to discover the sounds of Poles sneezing (“Apsik”) to greetings (“Cześć) or trying to fathom the concept of shopping in Poland (“Zakupy”) or exploring primeval forest beasts (“Żubr”) will find neatly written summaries on these and many other issues. With detours into the etymology of such evocative terms, even the linguistically fluent natives can appropriate some of this volume’s wisdom and drip with erudition at assorted cocktail (perhaps vodka-laced) parties. A must read for the well-heeled and down-to-earth types, urbanites and artists, bureaucrats and politicians, travelers and vagabonds, as well as historians and curiosity-seekers. This version of Poland is not found in papers or other planet guides, or dispensed by private tour gurus and discovered on the internet or dark web sites. It comes in print only (for now) and will certainly come in handy, even if you only plan to couch-surf Poland. 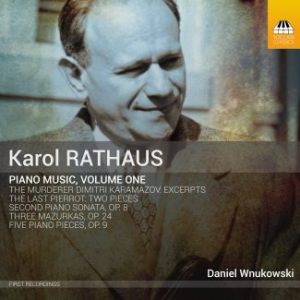 Daniel Wnukowski, a Polish-Canadian pianist residing in Vienna, just came out with a fascinating recording of piano music by Karol Rathaus (1895-1954), a great and undeservedly forgotten composer. Born in Tarnopol (now Ternopil, Ukraine) during the time when this part of Poland was administered by Austria-Hungary, Rathaus came from assimilated Polish-Jewish intelligentsia and studied in Vienna, where he was universally recognized as the most talent pupil of Franz Schreker. Besides being anchored in Vienna after World War I, Rathaus gravitated towards a more cosmopolitan Berlin, where he enjoyed much success and acclaim from esteemed musicians (Erich Kleiber, Georg Szell, and Wilhelm Furtwängler) and made significant inroads as a composer for film industry in Berlin and Paris. After Hitler’s rise to power, Rathaus spent some years in London, working in opera and BBC television. By the late 1930s, Rathaus emigrated to the US, at first commuting between Hollywood and New York and finally settling on the East Coast when he joined the Queens College faculty.

Daniel Wnukowski’s CD on the Toccata Classics label’s “First Recording” series presents Ratahus’s solo piano compositions, including Fünf Klavierstücke (1924), Piano Sonata No. 2 (1927), Trois Mazurkas (1928), two pieces from the ballet Der letzte Pierrot (1927) and three excerpts from the film music to The Murder of Dmitri Karamazov (1931). Recorded in Vienna on a Bösendorfer Imperial Grand, this CD brings to life not only the music by this excellent composer, but also gives a fascinating perspective on the musical life in Vienna, Berlin and Paris in the 1920s and early 1930. Wnukowski’s firm command of the material and solid musicianship will make this CD particularly attractive to a large audience. Since promoting of Karol Rathaus’s music is one of Wnukowski’s stated goals, it is hoped that in the coming months and years not only we shall hear more of Rathaus live in concerts and festivals, but also come to enjoy further CD releases with his Piano Concerto as well as the operatic and symphonic repertoire.