The year’s end and the holidays usually prompt our friends near and far to send us all kinds of important publications, scores and other materials that are gratefully accepted and integrated into the Polish Music Center’s library collection. There are several wonderful new items that arrived during the last two months that we would like to acknowledge by short descriptions that follow below:

During the fall months of 2018 Teatr Wielki-Opera Narodowa in Warsaw presented a truly phenomenal exhibit about Ignacy Jan Paderewski in commemoration of the centenary of Poland’s regained independence, entitled “Paderewski—The Anatomy of Genius”. From 27 September until December 9, several rooms on the Opera’s piano nobile were dedicated to presenting Paderewski as an artist, politician, philanthropist and California almond and wine producer. After entering under a neon facsimile of Paderewski’s florid signature, the first gallery assembled a selection of Paderewski’s portraits by such artists as Władysław T. Benda, Louis F. Schützenberger, Edward Burne-Jones, Tadeusz Styka and Princess Louisa Victoria, Queen Victoria’s eldest daughter, as well as dozens of photos taken at various points of Paderewski’s long and eventful life.

The second gallery featured Paderewski’s coverage by world press, including famous covers of Time and Etude, as well as sampling of countless articles covering various facets of Paderewski’s musical and political career. From there it was but a short step to the next gallery that covered the walls with Paderewski caricatures, from Vanity Fair and Punch to The Sketch, Theatre Magazine and poster-sized takes on Paderewski by such contemporary Polish artists as Andrzej Wieteszka or Edward Dwurnik. 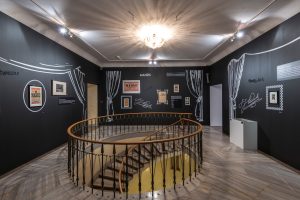 The fourth gallery was devoted to Paderewski the pianist and composer, with an extensive choice of photographs, concert programs and posters, and music manuscripts. An adjacent room was solely dedicated to Paderewski’s opera Manru and its premieres in New York, Dresden and Lwów as well as its subsequent performances throughout the twentieth century.

Quite rightly, a large section of the exhibit was set aside for documents, photos, bills, leaflets and proclamations related to Paderewski’s political career. Among the most interesting items there, the visiting public could see Paderewski’s January 17, 1919, appeal to the nation, a tableau of portraits of Paderewski’s ministerial cabinet, and diplomatic passports issued by Polish Ministry of Foreign Affairs for Paderewski and his wife, Helena. History of Paderewski’s courtship and marriage to Helena is richly rendered with a panoply of photographs, documents and caricatures.

Under the general heading “Celebrité” yet another section of this extraordinary exhibit depicted Paderewski’s superstar qualities—from his opulent Swiss residence, Riond-Bosson, to his leading role in the film Moonlight Sonata and personal endorsements on everything from sound recordings to cigarette packaging. The show-stopping items included Paderewski’s concert tails (with a cigarette ash stain on the lapel), a top hat and an elegant walking stick.

The remaining sections of the exhibit and the catalogue contain information on Paderewski’s worldwide travels and his adventures as a California wine producer.

Three articles—“Paderewski and Poland’s Recovery of Independence” by Adam Zamoyski, “Paderewski vs. America” by Stuart Isacoff, and “Paderewski in America” by Marek Zebrowski—are included in an extensive exhibit bilingual Polish and English catalogue that opens with an introduction by Waldemar Dąbrowski, Teatr Wielki-Opera Narodowa’s General Director. Curated by Marcin Fedisz and Monika Chudzikowska with a team of experts, this exhibit truly made the Opera Narodowa and all of the visitors to the “Paderewski—The Anatomy of Genius” exhibit feel proud to celebrate Paderewski and his legacy on the centenary of Poland’s regained independence.

Under the aegis of Teatr Wielki-Opera Narodowa, the intrepid team of Marcin Fedisz, Jarosław Mazurek, Aleksandra Piętka, Iwona Witkowska published a very important and rare text heretofore available only in German: I. J. Paderewski by Alfred Nossig. As author of the libretto for Paderewski’s opera, Manru, Nossig was a highly educated writer, artist and political figure. He first met Paderewski in Vienna in 1889 and in this short set of recollections and anecdotes Nossig paints a fascinating portrait of the great pianist and composer. Translated from the German by Aleksander Laskowski, this attractive book also contains a richly illustrated biographical section covering Paderewski’s artistic and political career.

Another short and charming text produced by Teatr Wielki-Opera Narodowa in connection with the Paderewski exhibit is Paderewski – Superstar by Iwona Witkowska, Kasia Bobowska, and Michał Matlingiewicz under the curatorship of Marcin Fedisz, Head of the Literary Department and Opera Gallery Exhibits. Written in an informal style, it is a great addition to many biographies of Paderewski, especially since it is destined for the younger audience.

Krzysztof Penderecki’s 85th birthday (falling on November 23, 2018) was observed far and wide, and reported on just as widely. Yet, for this occasion, the above-mentioned Teatr Wielki writers came up with a delightful text on Penderecki, Skomponuj kompozytora—Krzysztof Penderecki. Part biography, part tribute, and part explanation of what makes a composer—this little volume for young readers ought to be devoured with pleasure by bookworms in all age ranges.

Letters To The Editors

The Institute of Art of the Polish Academy of Sciences sent us a fascinating book of correspondence between Bronisława Wójcik-Keuprulian—a distinguished musicologist born in Lwów in 1890—and Henryk Opieński and Ludwik Bronarski, friends of Ignacy Jan Paderewski and individuals closely involved with preparing for publication of the first complete edition of Chopin’s works. Extensively researched and presented with a detailed introduction and commentary by Małgorzata Sieradz, this publication adds intriguing detail and light on the professional relationships among the elite of Polish musicologists from the pre-World War II era.

Dr. Piotr Różański, pianist and professor at the Kraków Music Academy, was visiting the PMC recently to conduct research on piano music by Roman Ryterband. He also brought with him two books for our library, Mycielski—Szlachectwo zobowiązuje [Mycielski—Noblesse oblige] and Muzyka we Lwowie—od Mozarta do Majerskiego [Music in Lwów—from Mozart to Majerski]. The first book is a series of interviews and recollections of Zygmunt Mycielski, a noted composer and writer, by such figures as Michał Bristiger, Ludwik Erhardt, Maria Iwaszkiewicz, Krzysztof Meyer, Camilla Panufnik and others, taken down by Beata Bolesławska-Lewandowska. The other book offers a fascinating history of Lwów—a city that always had reputation of being among the most music-friendly in Poland. The author, Michał Piekarski provides much detail on Polish, Ukrainian and Jewish music societies, the Lwów Philharmonic, music schools and conservatories and the Chopin tradition in Lwów. The reader can also find information on music in Lwów’s churches and cathedrals, newspapers and periodicals, musical salons and cultural life of the society frequenting such establishments as Hotel George, Naftula Restaurant or Zalewski’s cake shop. Close to fifty short biographies of musicians associated with Lwów, including Józef Elsner, Józef Koffler, Karol Lipiński, Karol Mikuli, Ludomir Różycki, Henryk Melcer Szczawiński, Franz Xaver Mozart, and Karol Szymanowski, are also included.

The Polish Library POSK in London published an illustrated bilingual pamphlet 1918: Polska Odzyskuje Niepodległość—Poland Regains Independence, with maps, historical photos, posters, proclamations and artwork with accompanying text provided by Dr. Dobrosława Platt, POSK Library director. Drawn from the POSK archives as well as museums in the US and Poland, this attractive publication is a timely primer on the events leading to Poland’s emergence as an independent state following World War I. With short biographies of the most important political leaders of that era—Ignacy Daszyński, Roman Dmowski, Jędrzej Moraczewski, Ignacy Jan Paderewski and Józef Piłsudski—this publication is a handy reference item for all interested in that period of Polish history.

Henry Vars And The Concerto Genre

Dr. Andrzej Sitarz with his editorial board (Dr. Piotr Wilk and Dr. Aleksandra Patalas) at the Paderewski Institute of Musicology in Kraków presented us with the newest issue of Musica Iagellonica journal. Among the many interesting articles in Vol. 9 covering the year 2018, there is one by PMC Director Marek Zebrowski, which draws upon the PMC’s Henryk Wars Collection to discuss Wars’s Piano Concerto and place it in the context of other one-movement works of this kind. This article is accessible online at: www.muzykologia.uj.edu.pl. 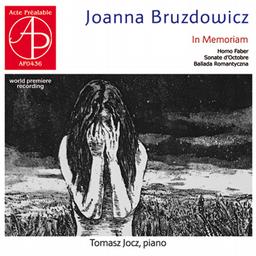 Composer Joanna Bruzdowicz—a longtime friend of the PMC—has shared her latest CD album, In Memoriam, featuring pianist Tomasz Jocz in such solo works as Ballada Romantyczna, Homo Faber suite and Sonate d’Octobre. With a personal introduction from the composer shedding light on the choice of repertoire, this CD was issued by Acte Préalable (APO 436), a leading label in Poland devoted to the promotion of Polish music and musicians.

Kraków based pianist Marek Szlezer—also a good friend of the PMC—presented us with his latest disc with solo piano works of Szymanowski. This DUX recording (DUX 1367) focuses solely on Szymanowski’s early compositions—Preludes, Op. 1, Etudes, Op. 4, Variations Op. 10 as well as much less-known Prelude in C-sharp minor (1899-1900) and Prelude and Fugue in C-sharp minor (1905-1909).

Mateusz Fiuk, deputy director of the Idea Sztuki Foundation donated to us an intriguing CD Kaczmarczyk vs Paderewski: Tatra, an interpretation and a contemporary take on Paderewski’s famous six-movement cycle, Album tatrzańskie [Tatra Album] for piano four-hands. Paweł Kaczmarczyk is a featured pianist on this recording with Kuba Dworak (bass), Dawid Fortuna and Mino Cinelu (percussion) a large brass section and electronics. With a total of nine tracks, Kaczmarczyk augments Paderewski’s iconic adaptation of Polish Highlands’ tunes, He also invites the listener to send some thoughts and observations on this album to the author of this unusual undertaking.

From Agnieszka Kreiner, who leads the Tatrzańska Orkiestra Klimatyczna, we received a CD Polskie Kolędy Historyczne i Pastorałki Ucieszne [Historical Polish Christmas Carols and Shepherds’ Joyful Carols]. Listeners will find such standards as Bóg się rodzi [God is born] and W dzień Bożego Narodzenia [On Christmas Day] as well as an assortment of other seasonal and historical songs, including The Old Veteran, Siberian Carol, Highlanders’ Carol, Carol of the Warsaw Uprising, among others.

Many thanks to all our friends with for these wonderful gifts… Dziękujemy!