Dr. Zofia Petrovich, together with her husband and PMC founders, Stefan and Wanda Wilk, were among the hosts during Henryk Mikołaj Górecki’s 1997 visit to Southern California. Recently, Dr. Petrovich found a number of informal photos taken various sightseeing trips around Los Angeles, Malibu and the Santa Monica Mountains, showing Górecki at leisure, dining with his hosts in various homes and restaurants, and visiting the USC campus. This rare collection of images has just been scanned and it will greatly enrich the repository of images we already have from the 1997 “Górecki Autumn” that included his October 1-5 residency at the Thornton School of Music and his spectacular concert at Bovard Auditorium on October 3.

Trombonist and conductor, Shawn Davern, currently studying at the James Madison University in Virginia, recently wrote to us about his final graduate music project:

“I recently gave my final Graduate Lecture Recital on Polish Folk Music & Tradition and I wanted to let you know that the information and essays provided by the PMC was an integral source in my research for this project. Thank you so much to you and your staff for compiling such a comprehensive collection of information regarding Polish folk music, dance, history and tradition! From this research, I composed a five-movement wind ensemble piece based… [on] Polish folk regions and dances, all revolving around the holiday … of Wigilia that occurs on Christmas Eve for Poles. I am very Polish in my heritage and Wigilia is one of my favorite events of the year.”

Mr. Davern’s pdf score of Wigilia—A Polish Folk Suite for Wind Ensemble accompanied his email and has now been added to the electronic repository of scans of Polish-themed music that we’re happy to share with all interested performers and researchers. To view a performance of Wigilia, visit youtu.be/KSa8PSuMifs, and to view a lecture on the subject, visit youtu.be/PgJisWv6Q78. 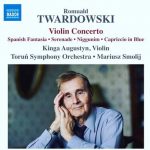 From our friend in New York City, the virtuoso violinist Kinga Augustyn, we recently received her newest recording of several works for violin and orchestra by Romuald Twardowski. Issued by Naxos, Kinga’s CD features a wide selection of Twardowski’s compositions written between 1979 and 2006. They include Capriccio in Blue (written in memory of George Gershwin), the two-movement Spanish Fantasia, Niggunim—Melodies of the Hasidim, Serenade for string orchestra, and Violin Concerto. Throughout the disc, Kinga Augustyn’s shines in her solo parts whilst maestro Mariusz Smolij and Toruń Symphony Orchestra amply prove their mettle as inspired collaborators.

A Collective of Musicians 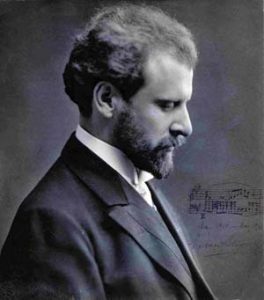 During the past year, the centenary of Poland’s regained independence precipitated a swarm of publications, as well as concerts, conferences, celebrations, commemorative displays, events, feasts, institutional gatherings and international proclamations, among others. The Ministry of Culture and National Heritage published a richly illustrated and informative album, Muzycy dla Niepodległej [The Musicians for the Independent Poland], covering a wide spectrum of Polish musicians living mostly during the nineteenth and early twentieth centuries. Presented in form of extensive biographies, this publication covers not only such well-known figures as Chopin, Kurpiński, Moniuszko, Żeleński, Noskowski, or Paderewski but also brings to light lesser-known artists, such as Józef Nowakowski, Napoleon Orda, Nikodem Biernacki, or Ignacy Krzyżanowski.

Joseph Herter, our friend in Warsaw and the author of a definitive biography of Zygmunt Stojowski, provided a generous entry on Stojowski for this effort and it is thanks to him that this valuable publication had reached our library.

Paderewski on Poland and Polonia

Knowing of our great interest in Paderewski, our friend from Toruń, Krystyna Borkowska, donated to us a very interesting title, Paderewski—Myśli o Polsce i Polonii [Paderewski—Thoughts about Poland and Polonia], published by Editions Dembinski in Paris in 1992. This little-known book on this side of the world was edited by two experienced Paderewski scholars: Marek Drozdowski and Andrzej Piber. The first part (about 40 pages) is devoted to Paderewski’s biography and the remaining 200 pages present various documents, transcriptions of Paderewski’s speeches, notes, correspondence, press interviews and the like. This volume will be a great addition not only to our library but will also aid in providing background information for items in our Paderewski Archive—Paso Robles Collection of photographs, negatives, documents and memorabilia.

Dr. Lisa Cooper Vest is another great, long-time friend of PMC. And, as a professor at Thornton School of Music she drops by frequently to discuss her various projects in Polish music with us. In early February she surprised us with wonderful gift of a book we still didn’t have in our library, Dzienniki [Diaries] of Stefan Kisielewski. This prolific composer, music critic and an important literary and political figure in Poland—both before and after World War II—was an important chronicler of musical, political and civic life. Almost a thousand pages in this selection from Kisielewski’s Diaries covers the years 1968-1982 and it is a truly fascinating read.