A CONCERT AT CATE

Betty Harford, a longtime loyal friend and supporter of the Polish Music Center, attended the Cultural Exchange Program concert given by Polish, Ukrainian and Californian students at Cate School in Caprinteria on October 26. The concert program booklet Ms. Harford sent us lists the wide range of repertoire the six participating students performed on that occasion. Works by Chopin, Debussy, Kapustin, Paderewski and Schubert were performed by Małgorzata Machowska and Piotr Lara from Poland, Sofiya Dashak and Bohdan Terletskyy from Ukraine (pictured above, during their tour around California) and Luke Kim and Antón de la Fuente from California. At the end of the program, the students paired together in three 4-hand piano arrangements of Gershwin’s most popular tunes. Organized by Cate School with support of the Kim family, the Cultural Exchange Program is supervised and run by the Paderewski Festival in Paso Robles.

AN AMERICAN IN WARSAW 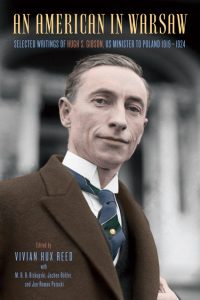 Author Vivian H. Reed recently donated two copies of her excellent book, An American in Warsaw—Selected Writings of Hugh Gibson, US Minister to Poland, 1919-1924. Since Paderewski and Gibson worked together on rebuilding Poland after 123 years of Partitions, this title will be an important addition to the Polish Music Center’s library. It will also enrich our Paderewski Collection of documents, photographs and memorabilia with the most recent and detailed research on the lesser-known facets of Paderewski’s political career. Drawing on Gibson’s own writings, personal correspondence and documents from several archives, Vivian Reed’s book carefully traces the developments leading to the Polish-Bolshevik war of 1920 and its aftermath, insurrections and plebiscites in Silesia in 1921 and Poland’s gradual drift towards military dictatorship that culminated in Piłsudski’s coup in 1926. This well-documented and richly illustrated volume is a must-read for anyone interested in gaining an in-depth look into the early years of Polish Second Republic.