Violinist Janusz Wawrowski recorded his last album, Brillante (Warner Classics 0190295808440), with the Stuttgarter Philharmoniker and Daniel Raiskin, and it was released at the end of 2017. To date, the track of Wieniawski’s Violin Concerto No. 2 has already been listened to by 80,000 people on Spotify. 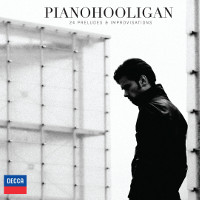 Released on October 2017, “24 Preludes & Improvisations” is a 2 CD offering by the Polish pianist and composer Piotr Orzechowski (a.k.a. Pianohooligan), his fourth for the Decca label. The program of the album presents twenty four preludes composed by Orzechowski, each of them followed by an improvisation connected to the prelude. The preludes are sequenced in the order of the chromatic scale from C major to B minor.

Below is an excerpt of a review written by Adam Baruch for Polish Jazz:

The music beautifully portrays the two faces of Orzechowski’s musical personality, rooted on one side in Classical Music ranging between Johann Sebastian Bach and Krzysztof Penderecki and on the opposite side in Jazz and Improvisation. Although perfectly capable to stand on its own, this music is much better understood when seen (or rather heard) in the full scope of Orzechowski’s recordings, as presented on the abovementioned Decca albums.

But even for a person completely unaware of Orzechowski’s background and recording legacy, it should be immediately apparent that this is a great Artist at work, both as a composer and as a performer. The scope of his imagination, intelligence, musical depth and aesthetic perfection is evident in every one of these forty eight miniatures. Listening to this music is a deep, almost spiritual experience, which should leave no music lover indifferent.

In spite of the seemingly serious and complex exterior of this music it is wondrously accessible to every open-minded listener, way beyond hard core Classical or Jazz listeners. The beauty of this music wins the listener over almost immediately and the fact that these pieces are short and diverse completely excludes any chance of boredom or tiredness. Personally I found this music so fascinating that the entire double album seemed to last but a few short moments to me.