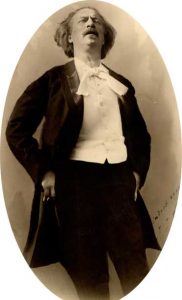 Given the centenary of Poland’s Independence in 2018 and Paderewski’s important role in those historical events, PMC Director Marek Zebrowski has prepared an extensive lecture about “Paderewski and World Politics.” This lecture focuses on Paderewski’s political activities between 1910 and 1922, his role in the “Front Morges” political formation in Switzerland in the 1930s, and on his last year of life, when Paderewski became a World War II refugee in America. This richly illustrated lecture features images from the PMC’s Paderewski Archive: the Paso Robles Collection. Dir. Zebrowski will be presenting this lecture in several cities during the first few months of 2018. 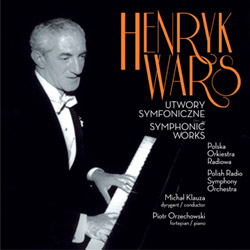 From Polish Radio Symphony Orchestra’s director, Krzysztof Kur we received a CD of the symphonic music by Henryk Wars (1902-1977), known in the U.S. as Henry Vars. This unique and exciting project was a collaboration between Dir. Kur, the Narodowe Centrum Kultury (Jakub Kruczała and the Department of Cultural Projects), and Polish Radio’s Archives Division (Monika Mandau). This CD represents the world premiere recording of the recently discovered, large scale orchestral works by Wars, including Symphony No. 1 (1949), a three-movement orchestral suite City Sketches (1951; rev. 1971), Piano Concerto (1950), and Maalot—Elegy for Orchestra (1974). Polish Radio Symphony Orchestra shines in richly orchestrated and complex orchestral textures under the baton of Michał Klauza. Piotr Orzechowski, also known as “PianoHooligan” is the soloist in Wars’s brilliant and late-romantic Piano Concerto. The CD album also comes with extensive program notes in Polish and English, and is illustrated with several rare photographs from the Wars family archive, which were made available for this project by the composer’s children, Diana Mitchell and Robert Vars. Facsimiles of manuscripts held in the PMC’s archives provide additional insights into these unusual and worthy compositions that deserve wider recognition. With such a fine recording in general distribution since December 8, many musicians should be encouraged to hear it and take up the challenge of performing these works in concert!

From Adam Bala and the Paderewski Polish-Ukrainian Foundation in Warsaw we received the book Ignacy Jan Paderewski—Kompozytor i polityk, issued in conjunction with a concert “W hołdzie Paderewskiemu” held at the Belweder Palace in Warsaw in December of 2016.  The CD recording featuring Marianna Humetska, Aneta Łukaszewicz and young pianists from Poland, Lithuania and Ukraine with accompanying text about Paderewski’s pianistic and political career. 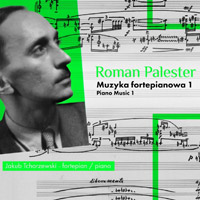 From pianist Jakub Tchórzewski we received his fascinating recording Roman Palester: Piano Music 1, featuring Piano Sonata No. 1 (1971), Variations (1972), Passacaglia (1973), and Espressioni (1975). Recorded at the excellent Lutosławski Studio in Warsaw, this joint project brought many organizations together, including the Ministry of Culture and National Heritage, Adam Mickiewicz Institute, Polish Radio/Program II, and Warsaw University Library, where manuscripts of these still unpublished compositions are held. An excellent and deeply insightful performance by Mr. Tchórzewski coupled with detailed program notes (in Polish, English and German) authored by Beata Bolesławska-Lewandowska make this CD—issued by Warner Music, Muza Polskie Nagrania and Polskie Radio Dwójka—a very attractive addition to our library of recordings! 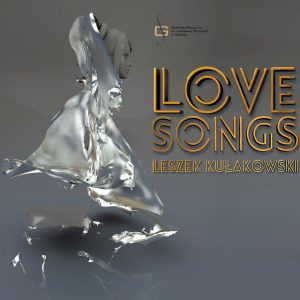 From jazz pianist Leszek Kułakowski we received two of his CDs: Love Songs, an album of original vocal and instrumental compositions to lyrics by Zbigniew Książek, and Chopin Impressions, a selection of Chopin’s best-known works in Mr. Kułakowski’s arrangements for jazz quartet. Both recordings richly demonstrate the imaginative and deeply musical nature of the artist who is often called a jazz visionary, and who combines classical, symphonic, chamber and jazz genres into his own, specific language of creative expression.

Henryk Martenka, Director of the Paderewski Music Association in Bydgoszcz and the main organizer of the International Paderewski Piano Competition gave us a two DVD set of footage captured during the 2016 Paderewski Piano Competition. Several fascinating pianists’ solo performances during the Competition stages are featured, as well as the Winners’ Concert with the phenomenally gifted Korean pianist, Hyuk Lee, who at the age of 16 was the youngest ever to win the top prize in this prestigious competition.

We also received Mr. Martenka’s Jak cię widzą, tak cię piszą [They Write It as They See It] with scores of his delightful essays on a truly astonishing variety of subjects. Henryk Martenka’s superb wit, great powers of observation, keen feeling of social satire and sterling writing skills make this generous sample of his writing a highly recommended read.

From Prof. Tomasz Król, Dean at the Łódź Music Academy and a fine violin virtuoso, we received several fascinating items following a visit at the Academy in December of 2017. Leading the list is the recording of Stanisław Moniuszko’s Songs by Irena Santor and with it also came a richly illustrated book highlighting Santor’s long and illustrious career, published by Łódź Academy in connection with the honorary doctorate granted to this iconic Polish vocalist. The other generous gift from Dean Król is the 2 CD set of complete Violin and Piano Sonatas by Grażyna Bacewicz performed by Dean Król and pianist Paweł Skowroński. This attractively packaged album with program notes in Polish and English is of great interest to us since recordings of all five of Bacewicz’s Sonatas are very rare and this is a top-notch performance.

Recently we also received a few more recordings from jazz pianist and longtime friend of the PMC, Kuba Stankiewicz. Issued in the RFM Classics Series—Muzyka z klasą[Music with Class]—Stankiewicz’s solo piano Kilar CD features twelve tracks of musical numbers from Wojciech Kilar’s scores for such well-known films as Portrait of a Lady, The Promised Land, or Bram Stoker’s Dracula. Kuba also presented us with copies of his 2 CD set, Chopin Songbook, which offers listeners many new musical perspectives on these well-known classics. 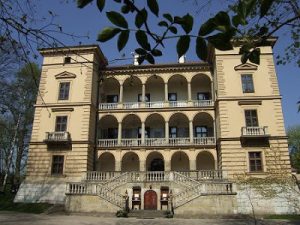 Following a late November 2017 visit at Willa Decjusza (also known as Villa Decius in English), and a delightful tour of the premises led by its director, Dr. Dominika Kasprowicz, PMC Director Marek Zebrowski received several interesting publications attesting to a great variety of programs and initiatives carried out by Dr. Kasprowicz and her staff. The materials we received, including an English language brochure about Villa Decius as well as their publications—Millenium Goals of Culture, Toleration and Tolerance, and The Return of the Fallen Empires—will be added to our library. So, too, will the leaflets with information about the Polish-British Round Table, Visegrad Summer School, and Polish Prize commemorating Sergio Vieira de Mello. All of these items will greatly enrich our library and will be made available to interested students and researchers. We are also looking forward to cooperating with Dr. Kasprowicz and Villa Decius on joint projects promoting Polish music and culture in 2018 and beyond.

From Dr. Marek Szlezer, professor at the Kraków Music Academy and a fine (as well as extremely busy) concert pianist, we received an exceptionally interesting book he recently published in Poland. Opracowanie Mazurków Chopina [A Guide to Chopin’s Mazurkas] is based on Zygmunt Stojowski’s papers, held in the PMC’s Zygmunt and Luisa Stojowski Collection. Dr. Szlezer not only translated into the Polish sections of Stojowski’s fascinating interpretative comments about Chopin’s Mazurkas, but also placed them in context of editorial practices prevalent in the 19th and 20th centuries. Very helpfully, Dr. Szlezer’s book also discusses Chopin, Stojowski and the Polish Piano School, compares various editions of Chopin’s works, and debates a variety of approaches taken by a number of distinguished editors over the past two centuries. It is hoped that the entire text of Stojowski’s fascinating and valuable point of view will become available to the Polish readers and that—maybe in the coming years and with enthusiastic support for Dr. Szlezer—the original English version of Stojowski’s writings will also see the light of day. 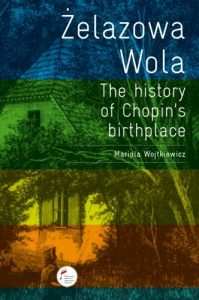 From Monika Strugała, our dear friend in Warsaw, we received a wonderful book published by the Fryderyk Chopin Institute in Warsaw. Authored by Mariola Wojtkiewicz, Żelazowa Wola – the History of Chopin’s Birthplace is a well-researched, richly illustrated, and attractively presented book. Architectural drawings, historical documents, records and photographs as well as detailed timelines of this charming Mazovian village provide an ideal mis-en-scène for understanding Chopin’s origins and insights into his music.

From Dr. Daniel Cichy, Director and Editor-in-Chief at PWM[Polish Music Publishers], we received an excellent biography of Grażyna Bacewicz, authored by Małgorzata Gąsiorowska. This is the first comprehensive monograph on the life and compositions by the most famous Polish woman composer of the twentieth century. Filled with musical examples, family photographs and many other fascinating documents, this volume’s excellent scholarship is to be recommended to anyone interested in Baczewicz’s work and musical career. Perhaps, in the coming years, the English translation of this book will elevate Grażyna Bacewicz to bigger recognition all across the world, especially since 2019 will mark the fiftieth anniversary of her death. 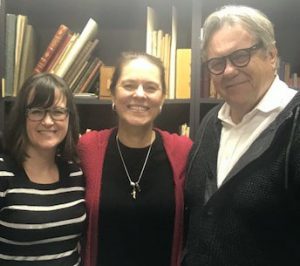 Mariusz Wróbel, director of the Gorzów Philharmonic, sent us a beautifully produced booklet with detailed description of the orchestra’s 2017-2018 concert season. It is very encouraging to see the breadth and scope of the programming and be truly impressed by Gorzów Philharmonic orchestra’s artistic plans for the near future.

From Val Kuklowsky (pictured at the PMC, with composer Veronika Krausas and PMC Asst. Dir. Krysta Close) we received a CD of solo piano music and scores of two symphonies—Symphony No. 1, Op. 15 and Symphony No. 2, Op. 22—written by his father, Kir Kuklovsky (1913-1999). Born in Lutsk, in 1934 Kuklovsky graduated with honors in conducting and composition from Lwów Conservatory and was active in Stanisławów (now Ivano-Frankivsk in Ukraine), leading musical ensembles and orchestras there and in Kraków. In 1950, Kuklowsky and his family emigrated to the U.S. from Paris and he spent the rest of his life around New York City and New England. Together with the CD recording, this donation allows a fascinating glimpse into the personal history and musical oeuvre of this little-known composer.

The Rowman and Littlefield Publishing Group sent us their latest musical print offering, Experiencing Chopin—A Listener’s Companion, by Christine Lee Gengaro. Directed toward the average listener and concertgoer, this volume surveys various aspects of Chopin’s life and music in the context of his family, friends and audience reception.