Wojciech Maciejewski, the younger brother of composer, pianist and choral conductor, Roman Maciejewski (1910-1998), died in Warsaw on February 11. He was 94 years old.  A kind and gentle yet firm individual, Wojciech was a tireless champion of his brother’s musical opus.

Born in Leszno in 1923, he spent the World War II years in Częstochowa and completed his university studies in Poznań in 1950. He began working for the Polish Radio Poznań in 1945, and in 1947 became its artistic director. His passion was directing broadcasts of literary and music programs and, since 1952, he worked as director of the Polish Radio Theatre in Warsaw. Wojciech Maciejewski was also a veteran contributing reporter to the daily Poznań newspaper, Głos Wielkopolski. 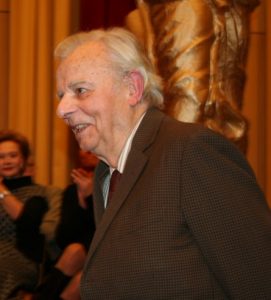 Since the 1990s, Maciejewski dedicated himself to bringing his older brother’s music to concert stages in Poland. He was instrumental in depositing about a hundred manuscripts of Roman Maciejewski’s compositions at the National Library in Warsaw, organizing performances and publishing of books about Roman, who since the mid-1930s had lived abroad, including several decades spent in the Los Angeles area.

An avid yachtsman, Wojciech Maciejewski often sailed with composer Witold Lutosławski and the legendary Polish captain, Karol Borhardt. Lutosławski’s boat was given by the composer to Maciejewski who, in turn, upon retiring from sailing, gave it to the Polish Yacht Club with a request to use it as a training vessel for aspiring young mariners.

Wojciech Maciejewski’s numerous contributions to professional, artistic and civic causes were recognized with a number of prestigious awards, including the Honorary Citizenship of the City of Leszno (where, in 2014, he unveiled a monument commemorating his brother), the Commander’s Cross of Poland, the Golden Cross of Merit, and Golden Badge of Merit for Service to the City of Warsaw.

Thanks to Wojciech Maciejewski’s generosity, the Polish Music Center has received a number of Roman Maciejewski’s published scores and books related to his musical activities. He also shared with us several historical photos of his brother and concert programs from various events in the U.S. and Europe. Wojciech’s boundless energy never subsided with age, and his mild disposition, good sense of humor and unfailing kindness in everything he said and did won him many friends and admirers all across the globe. His long and successful life was a testimony to the concept of brotherly love based on motives as pure as his heart.