From Lynwood F. Bronson, our longtime friend in northern California and a distinguished piano pedagogue, we received a rare and beautifully produced copy of Paderewski’s June 6, 1931 recital at the Théâtre des Champs-Elysées in Paris. It was first of Paderewski’s benefit performances for the Debussy monument fund drive. This Saturday afternoon program was quite extensive, opening with Brahms’s Variations and Fugue on the Theme by Handel, after which Paderewski played two great sonatas, Beethoven’s Op. 31 and Chopin’s Op. 58. That done, a group of Chopin miniatures followed, and the program continued with a selection of Preludes by Debussy, the Wagner-Schelling transcription of Tristan und Isolde, finally ending with Liszt’s transcription of Paganini’s Campanella. It is safe to say that many of today’s pianists would find this program daunting, if not nearly impossible to pull off. Paderewski dispatched it with his usual grandeur and grace, all at the age of 71. 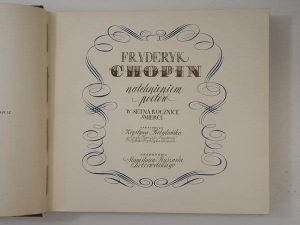 From our friend Zofia Adamowicz residing in Los Angeles area we received three lovely books. The first, Chopin: Antologia poetycka by Krystyna Kobylańska, was published by the Chopin Institute in Warsaw in 1949 to commemorate the centenary of Chopin’s death. Beautifully illustrated with facsimiles of various Chopin portraits, photographs, reproductions of old press clippings and manuscripts are interspersed with poems about the composer penned, among others, by Chopin’s father, Nicolas, Konstanty Ildefons Gałczyński, Kazimiera Iłłakowiczówna, , Maria Konopnicka, Adam Mickiewicz, Cyprian Kamil Norwid, Leopold Staff, Julian Tuwim, Stefan Witwicki and many others.

The other book from Mrs. Adamowicz is an oversized cloth album, Chopin w kraju[Chopin in his homeland], published by PWM in 1955. Co-authored by Jarosław Iwaszkiewicz and Krystyna Kobylańska, this volume introduces the reader to an extensive selection of documents connected to Chopin, including his birth certificate, school records with lesson plans, Chopin’s drawings and letters, family portraits, as well as travels to the Polish countryside, ending with his departure for Vienna in 1830.

Mrs. Adamowicz also presented us with a hardbound volume, Paderewski, published by PWM in 1967. This richly illustrated book with scores of photographs, programs, press clippings and other items traces Paderewski’s career as a pianist, politician and humanitarian. 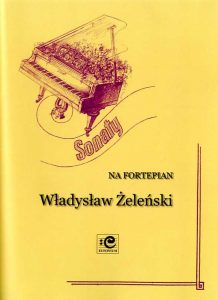 In addition to his professorship at Kraków Music Academy, pianist Marek Szlezer, member of the world famous Cracow Duo ensemble, is also a busy scholar dedicated to rescuing lesser-known Polish piano works from oblivion. In conjunction with the Cracow Duo’s Fall 2017 U.S. tour (that included performances for Polish Music Center in Los Angeles, as well as appearances in San Diego, Paso Robles San Francisco, Chicago and New York), Dr. Szlezer presented us with a brand new volume of Piano Sonatas by Władysław Żeleński (1837-1921), which he extensively edited for the Eufonium Publishing Company. Other positions in Eufonium’s growing catalogue include a great variety of piano works by such composers as Tadeusz Joteyko, Karol Mikuli, Eugeniusz Pankiewicz, Jadwiga Sarnecka, Roman Statkowski, Juliusz Wertheim, Juliusz Zarębski and Aleksander Zarzycki, among others.

As always, we are most grateful to all of our donors. Thank you! Dziękujemy!