Krzysztof Kur, organizer of the “Muzyka Odnaleziona” Festival and the Narodowe Centrum Kultury, just sent us the recording of the December 4, 2016 concert of Polish premieres at the Royal Łazienki Palace in Warsaw. Spotlighting the archival holdings of the PMC, this concert featured selections of American songs and short piano pieces written in Los Angeles by Henryk Wars; Zygmunt Stojowski’s Sonata for Cello and Piano, Op. 18; and the 24 Piano Variations on a Folk Song written by Roman Ryterband in Switzerland in 1942. Although this is only a reference recording and cannot be published, it can be listened to in our library and it will be made to all interested students and researchers.

Katarzyna Renes presented us with a fascinating and graphically well-designed book on improvisational theatre for schoolchildren and adults, Duży pies nie szczeka [A large dog doesn’t bark] published by Stowarzyszenie Willa Decjusza, Kraków, 2016. This volume—the outcome of Renes’s important project on how to deal with aggression of all kinds—presents a great deal of interesting ideas for students and teachers and shares a lot of important experiences drawn from actual workshops conducted all over Poland. Perhaps it would be useful to consider publishing an English language version of this title as well, for a much wider readership. For now, however, we are very pleased to add it to the reference section of our library.

The Cracow Duo (Marek Szlezer, piano and Jan Kalinowski, cello) gifted us their latest release entitled “Memories” (DUX 1018). With over 75 minutes of music, this album features a rich selection of very attractive works for cello and piano, including Chopin’s Polonaise, Op. 3, and some great encores—including The Swan by Saint-Saëns and Rachmaninov’s celebrated Vocalise—as well as works by Tansman, Piazzola, Shostakovich, and others.

Maria Peryt Opalka from Warner Music Poland sent us the album “Emerge” featuring symphonic works by Tomasz Jakub Opalka. This world premiere recordings presents four compositions for large instrumental ensembles—Collisions of the Matter, Emerge, D.N.A. and Quadra—each telling its own unique story and each representing a milestone in Opałka’s own creative development. The album was recorded by the Polish Sinfonia Iuventus Orchestra, the Warsaw Philharmonic Artists ‘Chamber Orchestra of the Chain X Festival’ and the Polish Radio Symphony Orchestra,

Iwona Sowińska recently sent us a copy of Autumn 2016 issue of Kwartalnik Filmowy[Film Quarterly] which features her excellent article about Henryk Wars [Henry Vars] and his difficult early World War II years in Soviet Union. Carefully researched and based on information received directly from the composer’s children—Diana and Robert—Sowińska ties together several little-known facts about Wars’s activities as film composer in Soviet Russia, filling many gaps in the biography of this fascinating musician. 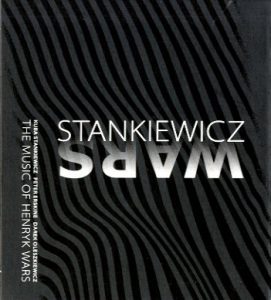 From pianist Kuba Stankiewicz and bassist Darek Oleszkiewicz we just received their latest collaborative recording of music by Henryk Wars. This is their third CD in a series featuring compositions by Polish film composers from Hollywood’s golden era, with previous albums showcasing Victor Young and Bronisław Kaper. On all three albums Stankiewicz andOleszkiewicz were joined by the drummer Peter Erskine, a two-time Grammy Award winner and fellow Thornton School of Music faculty member withOleszkiewicz. The nine tracks on this recording present some of Vars’s greatest hits from the 1930s, including Miłość Ci wszystko wybaczy [Love Forgives All], Ach, jak przyjemnie [Ah! It’s so Pleasant] or Na pierwszy znak [At the First Sign] as well as his tunes written after he settled in Los Angeles in 1947—I Remember, Over and Over and Over, Good Love, and Sleep my Child. Since Wars is mainly remembered today for his title tune to the film Flipper, a classy rendition of this charming tune is also to be found on this fine album, recorded for KSQMusic and distributed by Warner Music Poland.

Many thanks, as always, to all of our generous donors and friends! Dziękujemy!