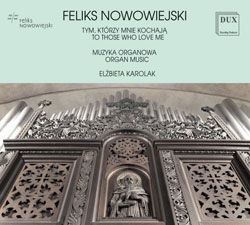 The year 2017 marks the 140th anniversary of the birthday and the 70th anniversary of the death of Feliks Nowowiejski and this CD has been developed under a program commemorating this very interesting, yet somewhat forgotten composer. Nowowiejski, a highly versatile composer, was in the first place an organist, and he achieved genuine mastery in playing this instrument. This proficiency is perfectly rendered by the excellent interpretation of Elżbieta Karolak, which the listeners of this recording can enjoy. The characteristic practice of the organ improvisation is reflected in three compositions which directly refer to Christmas by quotations from Polish Christmas carols, as well as in the colorful, illustrative music of the Organ Symphony No. 3. 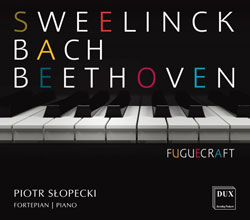 Piotr Słopecki—one of the most interesting Polish pianists—has accustomed us to his outstanding interpretations of Bach’s music (The Goldberg Variations or the cycle Die Kunst der Fuge). His newest album is a kind of phonographic opening of this versatile artist—pianist, organist, composer and arranger, who is familiar with jazz—to the other worlds of the music he practices. This is a very discrete opening, as the album dedicated to three outstanding composers only seemingly differs from the atmosphere of Bach’s works. The amazing Partita in E minor BWV 830, the first Bach’s composition published during his lifetime, is accompanied by the Fantasia No. 3 by Jan Pieterszoon Sweelinck, whose compositional technique was one of the inspirations for the works of the Master of the Fugue. Ludwig van Beethoven returns to the counterpoint technique in the Sonata No. 29 in B-flat major, Op. 106, which allows for discovery of this absolutely innovative work in the mainstream of the music directly referring to the output of the Cantor of Leipzig.