Edited and extensively introduced by Irena Poniatowska, Wdzięk afektu—teksty o tempie rubato [The Charm Affect—Texts about Tempo Rubato] is a wonderful new publication of the National Chopin Institute in Warsaw. This small hardcover book is a treasure trove of fascinating texts about interpreting music and the pulse of musical narration. Leading with an extensive article by Ignacy Jan Paderewski first published in 1910 to coincide with Chopin’s centenary, this book also contains Łucjan Kamieński’s essay O tempie rubato [About Tempo Rubato] published in Königsberg in 1918 as well as entries by two Italian writers, Brenno Boccadoro and Gastone Belotti. Boccadoro’s article appeared originally in 2006 as Aux sources du rubato: Diligens negligentia ou du “non fini” dans la musique de la Renaissance, and Belotti’s 1967 essay, Le origini italiane del “Rubato” Chopiniano, looked for the Italian roots of Chopin’s rubato. Thank you, Professor Poniatowska for this gift that should be a required reading, and not only for pianists!

From Dr. Grzegorz Zieziula at the Polish Academy of Sciences we received a truly princely gift—a massive, four-volume, clothbound facsimile edition of Stanisław Moniuszko’s arguably most famous opera, Halka. Beautifully illustrated and introduced with an extensive article by Dr. Zieziula, the reader is instantly enmeshed in thousands of fascinating details, from the process of publishing this seminal stage work in Poland to its distribution following the January 1858 premiere in Warsaw. Echoes of this opera and interest in it came from across Europe, including Prague and Paris as well as Moscow, St. Petersburg, and Kiev, and we also learn from the introduction that after becoming familiar with the score of Halka, Rossini sent Moniuszko his autographed photo. Richly illustrated with sketches, historical photographs and reproduction of the 1858 poster of Halka’s world premiere, this unique edition will take a pride of place in the Polish Music Center’s library. Thank you, Dr. Zieziula! 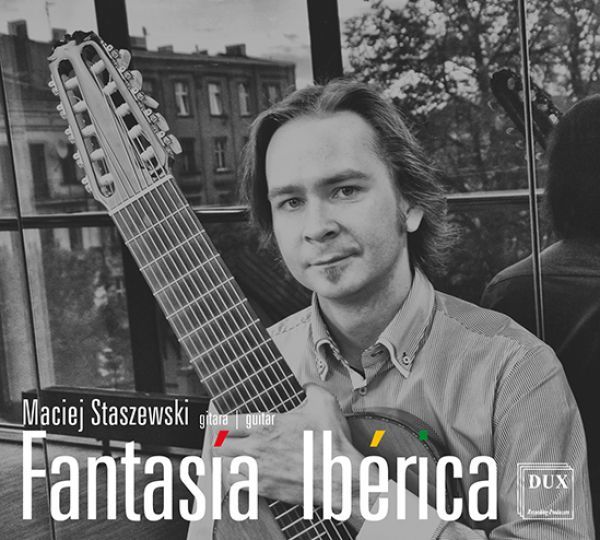 Our former student research assistant, Tomasz Fechner, recently returned to campus bearing gifts from colleagues in Poland. Maciej Staszewski, a guitar and composition professor at the Bacewicz Music Academy in Łódź, sent us his latest recording, Fantasía Ibérica (DUX 1336, 2016). Professor Staszewski will be visiting this USC campus later this fall to work with guitar students and visit the PMC. Another recording added to our large collection came from Szymon Morus, conductor of the ‘Progress’ Chamber Orchestra: their 2014 CD entitled “Elgar – Shostakovich – Penderecki” (Acte Préalable 353). Equally at home with traditional and contemporary chamber repertoire, Progress and Morus collaborated with Fechner and Staszewski on a concert during which they premiered a new arrangement of Krzysztof Olczak’s Koncert Gdański for 3 guitars and orchestra (1997) at the Guitar Festival in Tczew, Poland on May 21, 2017. Thank you, Tomek, for introducing us to Prof. Staszewski and Szymon Morus!