Three weeks after the composer’s 80th birthday, on December 14, 2013 in New York’s Carnegie Hall, the premiere of La Follia by Krzysztof Penderecki took place. The piece was composed for solo violin, dedicated to Anne-Sophie Mutter. It is not an accident that this first Polish phonographic recording of this work to be approved by the composer was made by Aleksandra Kuls—one of the most promising young Polish violin players, a prizewinner of many international competitions who was acknowledged with Wanda Wilkomirska Special Prize at XIV Henryk Wieniawski International Violin Competition. , requiring unusual technical skills, La Follia is in a form of capriccio and refers back to the baroque tradition, not only in the title. The combination of this new contemporary piece with Bach’s partita and Sonatas by Prokofiev and Ysaÿe encourages listeners to contemplate on the permanence of Bach inspirations, as well as fully appreciate the artistry of the young violinist. 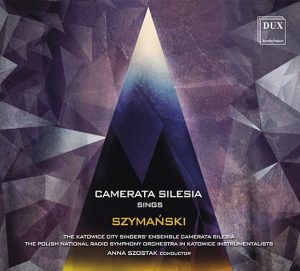 Music, perhaps more than any other art, is able to capture the mysterious notion of sacrum, which is well illustrated in the selection of works by Paweł Szymański for voices and instruments that are presented on this CD. Composed to the words of apocryphal hymn found among the inscriptions in the excavations of early Christian kingdom of Nubia, Phylakterion was composed especially for the singers of Camerata Silesia. Under the direction of Maestra Anna Szostak, Camerata Silesia is probably Poland’s only choir that can meet the extremely high demands of the composer’s vision. The recording was produced using the acoustics of the NOSPR Concert Hall in Katowice. 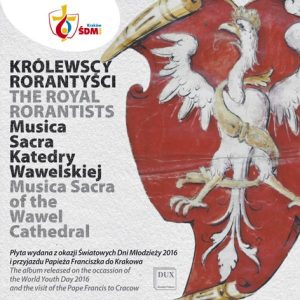 The Royal Ensemble of Rorantists (Capella Regia Rorantistarum) was established in 1540 by the enlightened ruler and patron of art, King Sigismund the Old. The ensemble’s members were priest-singers, and its main role was to honor religious ceremonies in the Jagiellonian court and, after the death of the founder, to sing daily masses for his soul. Sigismund the Old is remembered as an art patron and a renaissance culture enthusiast. His Chapel in Wawel Castle, which served also as the venue for the royal ensemble, is one of the earliest renaissance treasures north of the Alps.

The ensemble’s repertoire reflects their patron’s fascination with 16th century humanism and, in their 300 years of history, the Rorantists performed not only for works from Western Europe, but also music by Polish composers such as: Tomasz Szadek, Bartłomiej Pękiel and Grzegorz Gerwazy Gorczycki. The album was recorded by the modern Royal Ensemble of Rorantists, established and led by tenacious proponent of early Polish music, conductor Stanisław Gałoński.