The full-length documentary film Bridging Urban America: The Story of Master Engineer Ralph Modjeski  had its world premiere on April 13, 2016 at the NASCC Steel Conference – Gaylord Palms Convention Center. Created by filmmakers Basia and Leonard Myszynski, it celebrates master engineer Ralph Modjeski— a Polish-born, Paris-trained immigrant who contributed to the building of a modern America—as well as several strategically significant 20th century bridges and their impact on urban development. It is a tribute to innovative engineering, to the fabricators and to the workers, as well as a film about the melding of science and art, music and math. 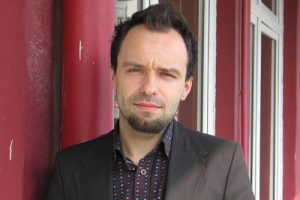 An amateur musician himself, Modjeski was a contemporary of the great pianist Ignacy Jan Paderewski, and his mother—the famous actress Helena Modjeska—helped launch Paderewski’s career by appearing during his debut recitals in Kraków in 1884. This film features an original score by Tomasz Jakub Opałka (right), whose majestic style provides a perfect backdrop for this tale of epic feats of engineering and nation building.

The official trailer of the film can be viewed on vimeo.com.