On February 29, Contempo—the renowned contemporary music collective at the University of Chicago, now headed by Polish composer Marta Ptaszyńska—looked across the ocean to examine today’s leading European composers during their “Contempo: Focus on Europe” program. Held at the Reva and David Logan Center for the Arts in Chicago, this compelling concert featured such award-winning compositions as Agata Zubel – Not I, Tadeusz Wielecki – The Thread is Spinning, Christophe Bertrand – Madrigal, Marta Ptaszyńska – Mosaics, and Alfred Schnittke – String Quartet No. 2. Members of eighth blackbird and the Pacifica Quartet were joined by the electric soprano Agata Zubel, making a return to Contempo, and Tadeusz Wielecki, director of Warsaw Autumn Festival, who performed in their own works as well as Bertrand’s Madrigal (Zubel). Before the concert, a panel discussion with Seth Brodsky and the composers was held.

Critic John von Rhein wrote a review of the concert for the Chicago Tribune, of which the following is an excerpt:

The diverse program suggested that living Eastern European composers march to a rather different aesthetic than their colleagues in the West. At the risk of generalizing, theirs is a more ideological music, music that asks big, serious questions and assumes rigorous ethical positions. It is not about putting note patterns on paper that would necessarily please the listener; rather, it is more about disturbing listener preconceptions about what expressive boundaries music can and should cross.

Zubel’s “Not I” (2012), a setting for vocalist, ensemble and synthesized sounds, of excerpts from Samuel Beckett’s monologue of the same title, is such a piece. The protagonist — here, the composer herself — engaged in a kind of heightened Sprechstimme (speech song), singing, speaking, crooning, laughing and whispering in increasingly intense dialogue with a churning welter of instrumental sounds and her recorded alter ego.

Even though long stretches of the absurdist English text were unintelligible when all of the musicians (including a percussionist wailing away on drum kit) were going full tilt, Zubel scored an amazing tour de force of vocal virtuosity. Having taught herself to sing her music out of practical necessity in her native Wroclaw, Poland, the composer-performer displayed uncanny accuracy of pitch and dramatic intensity as she navigated the jagged intervals of song and recitation. “Not I” tests the stamina of performers and listeners alike and goes on longer than it has to. But no matter: Zubel clearly is to her generation of new-music vocalists what the great Cathy Berberian was to hers. 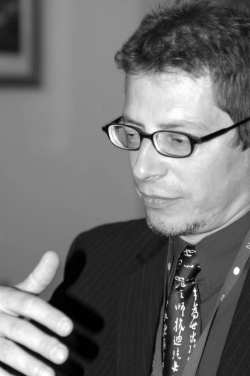 The Warsaw-based Wielecki is active as a double bass performer when he isn’t directing the famed Warsaw Autumn Contemporary Music Festival. His piece for solo bass and ensemble, “The Thread Is Spinning … IV” (2012), is part of an open-ended cycle of works for string instruments. Wielecki’s deep-throated double bass functioned here as a rude sonic catalyst, sparking murmurous, whistling, sometimes extremely subtle eruptions of musical activity from the other players. I didn’t find much expressive coherence in the score’s disparate gestures, but they were brilliantly taken by the fearless bassist and the intrepid blackbirds, fresh from their fourth Grammy Award win.

Read the full review at: www.chicagotribune.com.