The new CD by Meccore String Quartet, entitled Szymanowski & Debussy (Warner Music Poland), has been conquering Europeman market and has now won the Supersonic Awardfrom Pizzicato classical music magazine (Luxembourg), which acknowledged Meccore as one of the best string quartets in Europe.

Established in 2007, the Meccore String Quartet is considered one of the most distinguished Polish string quartets and has already won many international prizes. This ensemble studied at the Universität der Künste in Berlin, Germany and in a prestigious master ensemble class at the Queen Elisabeth Music Chapel in Brussels, Belgium. These musicians have performed worldwide in renowned concert halls, including the following cities: London, New York, Vienna, Madrid and Berlin. In 2011 the quartet was nominated for the “Paszport Polityki” prize in the classical music category for innovative interpretations and breaking stereotypes.

Exuberant and very emotional interpretations have become Meccore’s trademark. Youthful expression combined with outstanding skills and true virtuosity delights audiences in many countries of the world. The group consists of four young artists (Wojciech Koprowski, Jarosław Nadrzycki, Michał Bryła and Karol Marianowski), whose personalities meet head-on in music, creating a consistent, yet vibrating with emotions, explosive mixture. Known as “bad boys” of the Polish quartet, they prove that music and real talent know no bounds. Asked about what they would never give up in art, they say: “With every note we struggle to break the stereotyped image of a quartet that an average listener associates with a wedding or a museum.” And though Meccore is, above all, an ultra-professional “philharmonic” ensemble, the artists like to surprise us with something completely new. 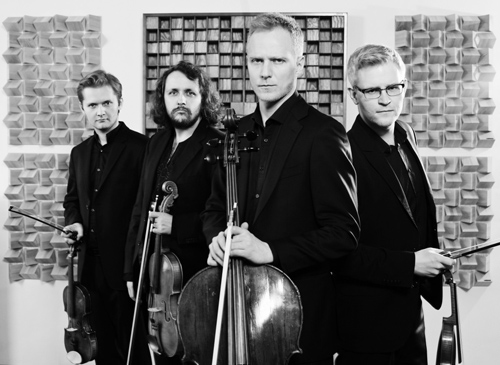 Released last September, their latest record presents works of two composers – Karol Szymanowski and Claude Debussy—who also did not fit into standard framework, and whose choices (both artistic and in live) raise many controversies even today. Their music is pervaded with intensive shades of sensuality. Their quartets are sometimes mysterious and impulsive, spasmodic and soothing, leaving numerous possible interpretations to the listener.

This CD was recorded thanks to the Irene-Steels-Wilsing Stifung Foundation at the Oskar Kolberg Philharmonic in Kielce, Poland and the quality of recording was supervised by excellent sound directors Thomas Bössl and Leon Wagner. The album is the first classical record to enrich the Polskie Nagrania (Polish Records ‘Muse’) catalogue after its acquisition by Warner Music Group.

Learn more about this album and watch a beautiful dance interpretation of Meccore’s performance of movement III: Lento from Szymanowski’s String Quartet No. 2 at www.warnermusic.pl.