From our friends at PWM—Director Adam Radzikowski and Editor-in-Chief, Daniel Cichy—we received an excellent recent publication, Muzyka wzwodzi—diagnozy i portrety [Music Inspires—Diagnoses and Portraits], a collection of over 40 superb and well-argued essays by Andrzej Chłopecki (1950-2012). Published by PWM with an introduction by Jan Topolski, this fascinating book is a valuable addition to our library.

And, talking of valuable and useful additions, our PWM friends also presented us with a series of short brochures on composers representing the “Generation ’70,” including Marcel Chyrzyński, Mikołaj Górecki, Eugeniusz Knapik, Andrzej Krzanowski, Paweł Mykietyn, Aleksander Lasoń, Wojciech Widłak, Maciej Zielińskiand Agata Zubel. Each pamphlet features a quick listing of works for sale and/or for hire from PWM, with the details on instrumentation and duration. 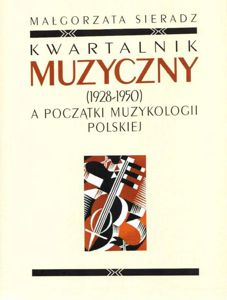 The Music History Department at the Art Institute branch of the Polish Academy of Science [Zakład Historii Muzyki, Instytut Sztuki Polskiej Akademii Nauk] has been supplying the Polish Music Center with its quarterly, Muzyka, for many years now. Always grateful to receive this valuable publication for the reference section of our library, this time around we also received Dr. Małgorzata Sieradz’s book, Kwartalnik Muzyczny (1928-1950) a początki muzykologii polskiej[Kwartalnik Muzyczny (1928-1950) and the origins of musicology in Poland]. In her book, Dr. Sieradz, who is the Editor and Secretary of the Muzyka quarterly, sheds much light on the legendary Polish musicologist, Adolf Chybiński (1880-1952) and his numerous disciples. The book also describes the growth of various musical societies that directly influenced the development of musical criticism in Poland during the first half of the twentieth century.

Dr. Marek Szlezer, a brilliant pianist and part of the Cracow Duo ensemble with cellist Jan Kalinowski, spent several weeks at the Polish Music Center last year, researching the Zygmunt and Luisa Stojowski Collection held in our library. Besides manuscripts, first editions, correspondence, photos, and many other items, the Stojowski Collection also has numerous writings on music, history and politics penned by Stojowski himself. Szlezer’s Zygmunt Stojowski—Pisma wybrane [Zygmunt Stojowski—Selected Writings] represents the first Polish translation of Stojowski’s lectures and essays on such topics as practicing, Chopin and Polish Music, Chopin’s 95th Death Anniversary, analysis of Chopin’s Nocturne Op. 48 no. 1, and a long text, Chopin najdoskonalszy [Chopin most excellent], culled from a number of lectures on Chopin given by Stojowski at the Juilliard School of Music in 1944. Published by the Kraków Music Academy, where Dr. Szlezer holds the professorship of piano, this volume should prove to be an excellent resource for young pianists in Poland as well as a cherished addition for the PMC library. 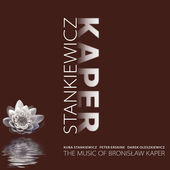 Noted Polish jazz pianist, Kuba Stankiewicz, devoted the last few years to discovering two great Polish composers of lighter music, Victor Young and Bronisław Kaper, recording their best-known tunes with two of his superb partners, bassist Darek Oleszkiewicz and drummer Peter Erskine. The first CD with music by Victor Young was already given to PMC last year and now, Mr. Stankiewicz presented us with a freshly-minted Kaper CD, featuring such great standards as Ninon, On Green Dolphin Street, Invitation, Blue Lovebird and Hi Lili-Hi Lo, among several others. This attractively-produced album also has a short introduction by Stankiewicz and a captivating essay entitled “Bronnie,” written by Polish documentary filmmaker, Anna Ferens, who has been interested for many years in Kaper’s fascinating life story. Stankiewicz was in Los Angeles recently to record another album of standards by Henryk Wars [or Henry Vars, as he was known in the U.S.] and we look forward to its release later this year!

Dr. Ewa Muchnick, a long-time friend of the PMC who donated a number of items related to Henry Vars and Bronisław Kaper, recently sent us two concert programs from the mid-1960s, once featuring film music of Elmer Bernstein, Bronisław Kaper, Bernardo Segall and Leonard Rosenman, and the other from the Los Angeles Breakfast Club 7 May 1965 revue program of Polish music and songs, featuring Renata Bogdańska, Kazimierz Pawłowski, Halina Łucyk and Kazimierz Turewicz.

Violetta Rotter-Kozera, a longtime PMC friend and director of several excellent documentaries on musical subjects, including Please Find—Henryk Mikołaj Górecki(2012), has donated to the Polish Music Center a DVD with her documentary, Wojciech Kilar. Credo (2012). We are also privileged to receive a DVD of Ms. Rotter-Kozera’s latest film, Idea, która przerasta codzienność—Polskie Wydawnictwo Muzyczne (2016), a presentation of the rich and fascinating history of the Polish Music Publishers [PWM], produced to commemorate the seventieth anniversary of PWM’s existence. The Warsaw premiere of Ms. Rotter-Kozera’s latest film took place on June 20 at the National Audiovisual Institute. Present for the occasion were PWM’s Director, Adam Radzikowski, PWM’s Editor-in-Chief, Daniel Cichy, and Andrzej Kosowski, who for many years helmed PWM and is currently serving as Director of Institute of Music and Dance. 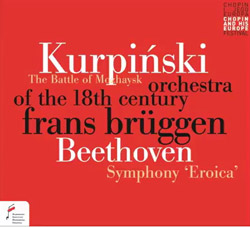 Wojciech Marchwica, Director of the National Chopin Institute in Warsaw presented the Polish Music Center with 2 CD albums. The first features Frans Brüggen and his Orchestra of the Eighteenth Century in Karol Kurpiński’s Bitwa pod Możajskiem [The Battle of Możajsk], an epic and largely-forgotten 7-movement work depicting Napoleon’s victorious battle against Tsar’s army in September of 1812. On this recording Kurpiński is paired with a recording of Beethoven’s Eroica Symphony (NIFCCD 039).  The other album donated by Dir. Marchwica is a 2 CD set of Kate Liu’s performances recorded live during the last Chopin Piano Competition in Warsaw (NIFCCD 619-620). The repertoire features Andante spianato and Grand Polonaise, Op. 22, Ballade in F minor, Op. 52, Sonata in B minor, Op. 58, and Polonaise-Fantaisie, Op. 61 as well as several smaller-scale works.

Stanisław Suchora, CEO of Sonora Music donated to the PMC a CD of music by Mieczysław Weinberg performed by violinist Linus Roth (Challenge Records). The repertoire on this disc includes Weinberg’s Three Sonatas for Solo Violin as well as his Three Fantastic Dances for Violin and Piano with pianist José Gallardo.

Tadeusz Owczuk, always a most gracious host in Żelazowa Wola, presented the Polish Music Center with an excellent publication, Chopin’s Birthplace, depicting items on permanent display at the small manor house where Chopin was born in 1810. This second, corrected edition came out last year and it contains many illustrations and descriptions of the house, interior furnishings, the surrounding parkland and other topics related to this hallowed place in history of Polish music. 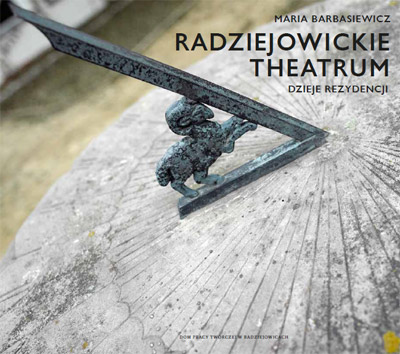 Another great publication, Radziejowickie Theatrum – Dzieje rezydencji [The Scene at Radziejowice – History of the Residence] authored by Maria Barbasiewicz was given to us by Bogumił Mrówczyński, a longtime director of the artistic retreat at the Radziejowice Palace south of Warsaw. For the past twenty years, Director Mrówczyński has warmly welcomed artists of all kinds and provided a terrific creative opportunity for anyone looking for inspiration and blissful repose within the elegant space of the palace and the surrounding grounds. Lavishly illustrated and meticulously researched, Barbasiewicz’s book gives a tour de force of the palace’s history, its different owners and many artists who visited the palace over the past fifty years.

Many thanks, as always, to all of our generous donors and friends! Dziękujemy!