The Fifteenth International Festival of Music in Catalonia was held in the small but artistically significant town of Céret in southern France, from August 20-23. Organized annually since its inception with heartfelt dedication by Polish composer and resident of the area, Joanna Bruzdowicz, who also serves as the Festival’s Artistic Director, this year’s program spotlighted literature for the string quartet and offered several fascinating concerts, each featuring important premieres.

The opening concert on August 20 (pictured above) featured a world premiere of the revised version of Lella, a secular oratorio originally composed in 2011 by Joanna Bruzdowicz and performed in Bastia on the island of Corsica in November of 2011. Written by Christiane Schapira, the libretto presents the story of Danielle Casanova, a native of Corsica, who was denounced for her political affiliations with the Communist Party of France and sent to the concentration camp at Auschwitz, where she died. The work is scored for string quartet, oboe, percussion, soprano, mezzo soprano, narrator, and a chamber female choir. Joanna Bruzdowicz took to the podium to conduct this nearly hour-long work that captivated the assembled audience with its reflective and meditative qualities. Mezzo-soprano Liliana Górska shone in her demanding leading part, and the soprano role and the narrator’s parts were deftly handled by a local musician, Aline Rico. The Neo String Quartet represented by Karolina Piątkowska-Nowicz, Paweł Kapica, Michał Markiewicz and Krzysztof Pawłowski, provided a musically compelling core of the ensemble, while percussionist Cyric Baudet-Arnaud and oboist Emma Settoni added welcome touches of color to the score’s texture. The all-female vocal ensemble Osmose was positioned to the side and provided poignant commentary, keeping to the venerable tradition of Greek tragedies.

The August 21 concert continued to spotlight the Gdańsk-based Neo Quartet but on this occasion they were joined by two guest artists, bassist Claude Delmas and pianist Marek Zebrowski. The night began with the European premiere of Zebrowski’s Music for David (2015), a ten-minute work for string quartet originally written to accompany a short film made by David Lynch for this collaborative project that was introduced at the March 28 Visions & Voices concert at the University of Southern California in Los Angeles. Neo Quartet’s expertise in performing and promoting contemporary music infused the performance with much gravitas and credibility. Next came a world premiere of Gabriel Fauré’s Dolly Suite, originally written for piano four-hands, but adapted by Zebrowski for piano quintet. After the intermission, bassist Claude Delmas joined the group whilst Neo Quartet’s first and second violinists traded places—Katarzyna Nowicka performing in Zebrowski’s arrangement of Debussy’s Petite Suite and Paweł Kapica joining Zebrowski and the rest of the ensemble in Johann Nepomuk Hummel’s brilliant and brooding Piano Quintet, Op. 87. 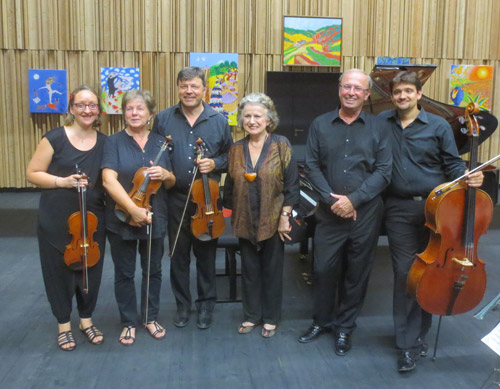 The August 22 concert was dedicated to “Music from the Trenches” and also featured a fascinating exhibit devoted to music and composers of the World War I years that was installed in the concert hall lobby for the occasion. Belgian-based Scaldis Quartet (Brigitte Seghers, Émilie Anoine, Dominique Huybrechts and Cyril Simon) and pianist Philippe Gérard presented Piano Quartet, Op. 6 in D minor (1916) by Georges Antoine (1892-1918), and Piano Quintet in C minor (1918) by Louis Vierne (1870-1937). The most fascinating and effective work of the evening was a String Quartet in A-minor by Ernest John Moeran (1894-1950), a lively and complex composition dating from 1921 with strong traces of Irish folk music, written by a composer who sustained serious injuries in northeastern France in 1917. 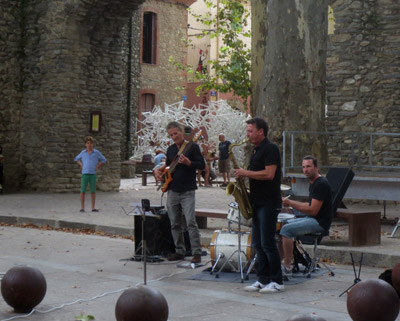 The Festival ended on a lighter note with a jazz trio performing outdoors on Sunday evening to a large group of dedicated fans and local townsfolk. All other Festival concerts were held at the newly-constructed Salle de l’Union, which features attractive outside architecture but lacks acoustical ambiance in the multi-function designed main hall.