This unusual competition promotes the efforts of good musical reviewers writing about Polish musical events. After considering a great number of applications, the jury of the Kropka Competition—presided over by Dr. Daniel Cichy of PWM Editions—decided to award three Main Prizes. The recipients include: Anna Burzyńska (Didaskalia), Karolina Kolinek-Siechowicz (Ruch muzyczny), and Barbara Kinga-Majewska (Glissando). The best debut certificates went to Katarzyna Trzeciak and to Worldpress blogger Aleksandra Bliźniuk.

Alex Ross (The New Yorker) received a Special Prize for foreign critics, and the Piotr Metz Award for Popular Music was given to Maciej Froński. The PWM Editor-in-Chief Award went to Aleksandra Bliźniuk, and Rafał Augustyn received the MEAKULTURA Foundation Award. 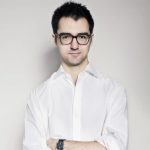 The Gala-Finale Award Ceremony will be held on May 10 at the PWM headquarters in Warsaw. Aleksander Dębicz (right) will add to the occasion with a special piano recital that will spotlight his new recording, Cinematic Piano, which Warner Classics Poland will release on May 11.

Part of the 29th edition of Warsaw Musical Encounters, the Kropka Competition was supported by funds from ZAIKS, PWM, IMIT, and POLMIC, with the National Cultural Centre extending the honorary patronage.