Polish saxophonist and composer Maciej Obara burst onto the international jazz scene after recording “Message from Ohayo” which won the Bielska Zadymka Jazz Contest for young jazz bands in 2006. In 2008 he toured Poland with US saxophonist Antoine Roney and was also recommended by Manfred Eicher (ECM) to Tomasz Stanko, with whom he has performed and recorded a throughout the world since. He also spent time at the Brooklyn Academy of Music, working with American musicians there, and then formed a band with pianist Dominik Wania back in Poland.

In 2011 Maciej Obara was nominated for the Fryderyk Jazz Musician of the Year Award and won a scholarship from the Młoda Polska Programme. In 2012 he was chosen to participate in the 12 Points Festival in Portugal with his Polish Quartet and in a showcase in Budapest. He was also selected, alongside countryman Maciej Garbowski, to participate in Take Five: Europe, which brought together some of the most talented emerging jazz musicians from France, Holland, Norway, Poland and the UK and included a week long residential dedicated to musical entrepreneurship and the music business in Europe as well as establishing contacts with other artists and promoters. During this period Obara established another project with Dominik Wania called the Obara International Quartet, which includes the two Norwegian musicians he encountered at Take Five: Europe, Ole Morten Vågan (bass), Gard Nilssen (drums). The group, offers a frenetic energy and a bold, harmonically dense sound, with material ranging from slow and sentimental to almost aggressively busy, held together in either case by highly reactive and technically capable musicians. “A vivacious, next-level start-up” (All About Jazz), the Obara International Quartet “fascinating blend of thoughtfulness, freedom, passion, superb improvising skills and structural discipline” (Herald Scotland), and the group’s recording “Komeda” was released in November 2012. 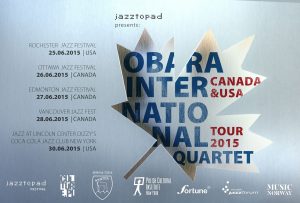 Thanks to connections made at Take Five: Europe, the Obara International Quartet now embarks on a tour of Canada and the United States, supported by the Jazztopad Festival in Wrocław as well as many local and international partners: