On the 74th anniversary of his passing, the Polish Museum of America (PMA) is proud to announce the public display of the Death Mask of Ignacy Jan Paderewski. The sculpture was created by Malvina Hoffman in 1941 and donated by Martin Skoble and Gabrielle Howard in January 2014. After having undergone conservation sponsored by Ludwika Rozwadowska, the death mask will remain on permanent exhibit in the IJ Paderewski Room of the PMA.

IJ Paderewski, who began as a pianist and composer, turned to politics, supporting Poland’s independence as its Prime Minister in 1919. As a diplomat, he used his music to raise relief funds for a war ravaged Poland, touring across America, speaking to, and performing for, audiences sympathetic to this cause. After an illustrious career, Paderewski passed away on June 29, 1941, at the Buckingham Hotel in New York. After serious research of the IJ Paderewski Collection in the Archives and other sources, among the many glowing articles on the man and his life, the Times Herald (NY) reported on July 1, 1941: “Malvina Hoffman, who had done a life-sized bust of the pianist, made a death mask of him” on June 30. 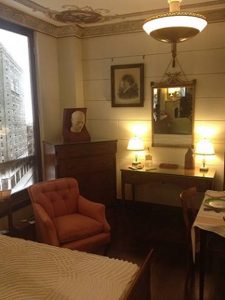 At that time, Hoffman was already a well-known New York based sculptor. She had been commissioned by the Field Museum of Natural History, Chicago, to create more than one hundred bronze sculptures for a permanent exhibit, The Hall of the Races of Man. These sculptures were also featured at the 1933 Chicago World’s Fair. As a friend of Paderewski’s, she had already created four earlier sculptures of him: Paderewski the Statesman, Paderewski the Artist, Paderewski the Man (all 1922 in bronze); and Paderewski the Friend (1923 in plaster). Additionally, Hoffman created a bronze of Paderewski’s hand; the PMA has a copy on display at his Steinway piano in the Paderewski Room.

The plaster cast death mask was the basis for Hoffman’s final Paderewski sculpture, also in bronze: Paderewski – The Last Phase (1941). Unfortunately, the bust had a tragic ending. It was aboard the MV Paderewski, a Polish motor vessel of the Gdynia America Line, when it was sunk by a German U-boat on December 30, 1942, in the Caribbean Sea.

In 1956, Joel Murray Altshuler, also an artist and sculptor, and a friend of Hoffman’s, received the original death mask from her. After his passing in 1992, it came to the possession of his twin sister, Ella, who passed away in 2012. As the cousins of his father, Martin Skoble was very close to both Joel and Ella. She had given the mask to Mr. Skoble, who in turn contacted the PMA.

In a brief email in April 2013, Mr. Skoble inquired if the PMA would be interested in accepting a gift – “the death mask of Paderewski cast by his friend, the sculptor Malvina Hoffman.” With the PMA’s beautifully renovated Paderewski Room, and its extensive archives chronicling the life of the Polish statesman, pianist, and humanitarian, the death mask of Ignacy Jan Paderewski was a fitting addition to the PMA collections.

The mask arrived at the PMA on January 23, 2014, delivered by a special carrier. Although Mr. Skoble included photos in his emails, the PMA had to wait to open the package. For preservation purposes, the artifact needed to be acclimated to the temperature and environment of the Museum. At an internal preview on February 6th, the mask’s condition was observed. Although in generally good condition, some staining and cracking was noted. The PMA was quickly in touch with Inez Litas of the Litas Liparini Restoration Studio, who recommended proper action for its care. In response to an earlier article on the donation, Ludwika Rozwadowska graciously sponsored the needed conservation. Now properly restored, the death mask is on current and permanent exhibit in the Paderewski Room at the PMA.

The Polish Museum of America is located at 984 N. Milwaukee Avenue, Chicago, IL 60642. All visitors are welcome. For more information: www.PolishMuseumOfAmerica.org.