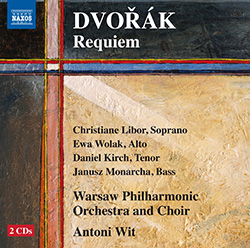 This new recording of Dvořák’s substantial Requiem is under the authoritative direction of Polish conductor Antoni Wit, who is both a Naxos house conductor and renowned interpreter of Slavic music. Released in both CD and Blu-ray Audio formats, this optimized recording features the Warsaw Philharmonic Orchestra, of which Wit is the former Artistic Director. See other recordings by Wit and the Warsaw Phil at www.naxos.com.

Antonín Dvořák’s huge popularity in England was built largely on the success of his Stabat Mater, which he had conducted there in 1884 and 1885. It was well suited to the country’s choral traditions and led eventually to a commission for a Requiem, which was premièred in Birmingham in 1891. Written in ten months during tours to Russia, England and Germany, its success was immediate. Sitting closer to the tradition of Cherubini than Verdi, its tone is compassionate and reflective, devoid of unnecessary drama, and movingly crafted with great sophistication.