Violinist Kinga Augustyn, who is already known to audiences in California after appearing at the 2012 Paderewski Festival in Paso Robles (pictured at right), has just been recognized with the 2015 “Outstanding Pole Abroad” Award [Wybitny Polak za granicą]. This year marks the fifth anniversary of this prestigious competition organized by the Polish National Emblem Foundation [Fundacja Polskiego Godła Promocyjnego], the organization that also runs the “Poland Now” [Teraz Polska] awards.

Local editions of the Outstanding Pole Abroad Award competitions have taken place in France, the Netherlands, Belgium, Spain and the United States. The US contingent of this competition is coordinated among the Polish Consulates in New York, Chicago and Los Angeles, and the Pangea Alliance. According to Grzegorz Fryc from the Pangea Alliance, “the mission of the Outstanding Pole Abroad Award competition is to create a positive image of Poles residing all over the world.” According to Mr. Fryc, many prominent Poles living abroad remain completely unknown to most residents in Poland. 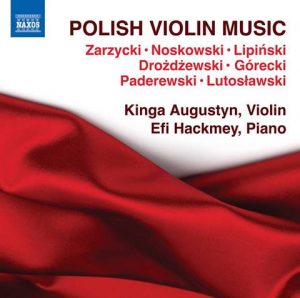 Mateusz Stąsiek from the Polish Consulate in New York and Leszek Sadowski from the New York’s daily Nowy Dziennik jointly mentioned that the jury had a difficult decision to make given a great number of highly qualified candidates competing this year. After much discussion, the New York edition of the Outstanding Pole Abroad Award in the “Young Pole” category was given Kinga Augustyn. The jury noted Kinga’s studies in her native Wrocław and in New York’s Juilliard School of Music, where Ms. Augustyn received her Doctorate in violin studies, as well as her rapidly growing musical career with numerous concerts throughout the U.S., Poland, and several other countries.

More information on the ceremony and laureates can be found at: www.dziennik.com. Additional information about Kinga Augustyn is available at kingaaugustyn.com.