A Review by Marek Żebrowski

As the sun disappeared behind the western horizon on the evening of June 3, dark blue skies became the backdrop for the Fowler Museum amphitheater, where the audience gradually took their seats. Besides the piano, a large screen and several speakers were set up, with a lectern and a microphone to the side. Soon, the floodlights lit the stage area and Mariusz Brymora, Consulate General of the Republic of Poland in Los Angeles, came out to greet the public.

His short speech was but an introduction to the first attraction of the evening—a 10-minute Polish TV report from the visit of President Obama in Warsaw. He was in Poland to attend the festivities celebrating the 25th anniversary of the Round Table discussions in 1989 and the first free elections in modern-day Poland that led to the fall of the Communist regime there and, in the months that followed, throughout the rest of Eastern and Central Europe.

The political part over, it was time for music to speak. Presented by pianist Kuba Stankiewicz and bassist Darek “Oles” Oleszkiewicz, the concert featured music by recently deceased Polish contemporary composer Wojciech Kilar, and Victor Young, a composer born in Chicago 115 years ago, but raised and educated in Warsaw. The concert began with Stankiewicz’s three opening solos, embracing the well-known hits from Kilar’s film scores: “Paulina’s Theme” from Death and the Maiden, Trędowata [The Leper], and Dracula. Although Kilar is generally regarded as a concert hall composer, it’s worth remembering that throughout his life he amassed well over 160 film credits, working with such iconic directors as Roman Polański, Krzysztof Zanussi, Jane Campion, and Francis Ford Coppola. Kilar’s film music—as demonstrated by Stankiewicz on this particular occasion—can be just as evocative and original as his other symphonic works. 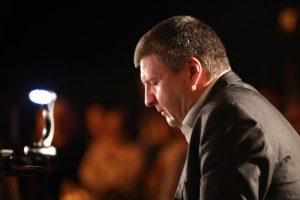 Given the soft atmosphere of the evening, Stankiewicz’s gentle approach to Kilar’s music was largely introspective, focusing mainly on the melodic lines that were gently embellished with standard jazz harmonies, spread across all registers of a small Yamaha grand. The audience warmly acknowledged the pianist’s thoughtful renditions of Kilar’s film tunes.

In turn, Stankiewicz introduced Darek Oleszkiewicz, with whom he had just recorded a CD of music by Victor Young. Although his career began as a virtuoso violinist in pre World-War I Warsaw, by the early 1920s Young was back in his hometown of Chicago and began to work in radio, changing his focus from classical to popular music and jazz. In the mid-1930s, Young moved to Los Angeles and formed his own, very popular orchestra. Working with top lyricists of the era, Young wrote music for over 350 films, including such greats as For Whom the Bell Tolls, Samson and Delilah, The Greatest Show on Earth, and Around theWorld in Eighty Days, for which he earned (posthumously) the 1956 Academy Award for Best Score. He was also musical director for Decca and Brunswick Records and worked with such entertainment giants as Bing Crosby, Marlena Dietrich, Judy Garland, Al Jolson, Danny Kaye, Ethel Waters, and countless others. Young contributed a long list of standards to the repertoire, including Sweet Sue, Street of Dreams, Loveme Tonight, Love Letters, My Foolish Heart, Golden Earrings, Mad About You, and Stella by Starlight. 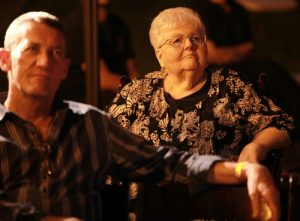 With Darek Oleszkiewicz on board, the duet gained a highly musical presence and heft, given to the musical textures by suave and well-timed bass contributions and extended solos. Several of Young’s hits were heard, including his tender Love Letters. Quite appropriately for the evening under the stars, the concert ended with the immortal Stella byStarlight.

Overall, the Stankiewicz-Oleszkiewicz Duo delivered a deeply musical and satisfying reading of music by two great film composers. The audience was quick to rush and congratulate the performers and acknowledge with warm applause the presence of Victor Young’s relatives in the audience, including his niece, Bobbie Fromberg . The gentle sounds of music still drifted across the UCLA campus as the crowds gathered at the Fowler courtyard slowly dispersed into the night.