November 3 marked the 10th anniversary of Professor Marek Stachowski’s death. A distinguished composer, pedagogue and Rector of the Kraków Music Academy, Stachowski was a significant presence on the Polish music scene. The Kraków Chapter of the Polish Composers’ Union and the Music Academy had jointly organized a series of concerts and lectures commemorating Stachowski’s artistic achievements. An exhibit dedicated to Prof. Stachowski was unveiled on Nov. 20 at the Music Academy foyer and was followed by an evening concert, “Schowski Jazz Impressions” and the Temple Synagogue. Several lectures and discussion panels were held on subsequent days in addition to a number of concerts, art exhibits inspired by Stachowski’s music, and other accompanying events. Most concerts were held at the “Florianka” Hall of the Music Academy and they presented a great variety of solo, chamber and orchestral works by this composer.

The last concert in the series was held on December 1. Pianist Gabriela Szendzielorz-Jungiewicz presented Stachowski’s Extensions I (1971) for piano, Five Small Waltzes for Piano (1998), and Extensions IV (2001). Whilst the 1971 Extensions relied on clusters and long stretches of fortissimo passages sustained with pedal, the 2001 Extensions (notated only in a form of a graphic design) proved to be an exciting and witty happening that involved the pianist (Ms. Szendzielorz-Jungiewicz) aided by two vocalists, Barbara Gładysz-Wszołek and Elżbieta Kolorz. Among pantomime and merry-making on stage, some music was heard from within and without the piano. Exotic percussion instruments were used to create subtle and amusing sounds and, finally, with the “rain-maker” tubes shaking steadily to invoke a downpour, the Steinway grand was carefully covered with plastic foil and the performers sought shelter underneath. 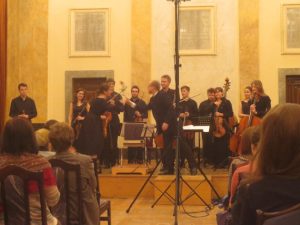 The Five Small Waltzes (1998), on the other hand, delighted with their intelligent and compact design and clever references to well-known waltzes by Chopin, Liszt and Ravel. In particular, it would appear that Valses nobles et sentimentales served at least as a partial inspiration for Stachowski’s charming miniatures; let’s hope they’ll prove as popular and cherished as their progenitors.

The Polish Music Publishers [PWM] organized an exhibit of selected scores by Stachowski and the current Music Academy Rector, Zdzisław Łapiński, graced the closing concert with his presence. After the concert he thanked all organizers and performers for contributing to this important event in Kraków’s musical life this fall.