Hy The Man for flute and piano

Overture and Summertime for cello and piano

Joanna Bruzdowicz was born on 17 May 1943 in Warsaw, Poland, and died on 3 November 2021 in Taillet, France. She was an émigré composer, spending most of her life in Belgium and France. Although her rich and varied oeuvre has been recognized in Western Europe, Bruzdowicz remains rather unknown to a wider audience, even in her native Poland. The scope of her creative activity covered the spheres of operatic, chamber, electroacoustic, symphonic, and film music.

The direction of Bruzdowicz’s artistic interests was shaped by such outstanding mentors as Kazimierz Sikorski, Nadia Boulanger, Olivier Messiaen, and Pierre Schaeffer, all of whom contributed to the development of her ability to use diverse musical languages. During the early experimental period ending in the mid-1980s, Bruzdowicz created a number of electro-acoustic works as well as compositions influenced by the neo-classical patterns and music modelled on Messiaen’s Catalogue d’Oiseaux.

A very important aspect of Bruzdowicz’s compositional output was her film music. She collaborated with many French directors, creating music for thirty-four films including Agnès Varda’s celebrated Sans toit ni loi—also known as Vagabond—which won the Golden Lion award at the Venice International Film Festival in 1985. These experiences significantly influenced the specificity of Bruzdowicz’s musical language, which is characterized by the creation of sound images that comment on as well as complement art, film and literature.

Joanna Bruzdowicz’s solo cello work, Stigma, opens our concert, which launches a series of performances worldwide commemorating the composer who would have turned 80 this year. It was written shortly after Bruzdowicz arrived in Paris in 1968 to study with Pierre Schaeffer, Olivier Messiaen and Pierre Boulez, and was active in the French Radio and TV experimental studio, Groupe de Recherches Musicales. It has never before been performed in the United States.

Song of Hope and Love (1997), a four-movement sonata for cello and piano, was dedicated to the memory of Polish Jews and other victims of the Holocaust. On the cover the composer quotes the poem, Flight, by the Polish Nobel laureate Czesław Miłosz. This composition does not refer only to the subject suggested by its dedication, nor does its dramatic character exclusively illustrate the tragedy of World War II. Instead, the sonata provides a musical perspective on the subject and expresses a desire to seek the ‘hope and love’ evoked in the title. The final movement, “Murmur” is thought-provoking, leaving the listener in a pensive mood.

Sixteen Pictures from an Exhibition of Salvador Dali (2004) is a cycle of works commissioned by the city of Figueres, Spain, to mark the centenary of the birth of the Catalan painter born there. Each of the solo piano vignettes refers to a different painting by Salvador Dalí without attempting to musically reproduce the content of the Surrealist painter’s works. Instead, it provides a musical commentary aiming to augment the sensory contemplation of the paintings, turning it into a profoundly artistic experience. 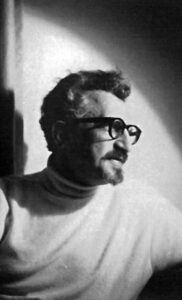 Fred Katz was a Jewish American cellist, composer, and conductor who made his mark in music history as a pioneer who used the cello as a solo instrument in jazz music. Born in the Borough of Brooklyn on 25 February 1919, Katz was a child prodigy on piano and cello, and studied for a time with Pablo Casals. He was also drawn to folk music and jazz presented in various New York nightclubs in the late 1930s and 1940s.

Mainly self-taught composer and arranger, Katz appeared at New York’s Town Hall recitals at a young age. After an eight-year scholarship with the National Orchestral Society at Carnegie Hall under the direction of conductor Leon Barzin, Katz played with the National Symphony in Washington, D.C. Later on, during his U.S. Army service, Katz conducted the Federal Employees Chorus, wrote for the Treasury Bond Wagon Shows, and was twice invited by President and Mrs. Roosevelt to the White House, where he conducted chorus performances for national radio broadcasts. After serving in the combat Medical Corps and as Music Director of the 7th Army Headquarters during World War II, Katz worked as a musical director, arranger and pianist for such artists as Lena Horne, Frankie Laine, Tony Bennet, Carmen McCrae, Harpo Marx, and instrumentalist Paul Horn.

A founding member of the Chico Hamilton Quintet, Katz did much of the writing and arranging for that group. With the Quintet he wrote the original jazz film score for the celebrated American noir movie, Sweet Smell of Success. Directed by Alexander Mackendrick with Burt Lancaster and Tony Curtis in the lead roles, the film was ultimately scored by Elmer Bernstein, but Katz and the Chico Hamilton Quintet made their onscreen debut.

Katz’s other recording credits include First Born for Desilu Studios, as well as jazz and comedy albums, Word Jazz and Son of Word Jazz with Ken Nordine for Dot Records. Other pioneering recordings made by Katz include the first jazz and poetry album with Larry Lipton for Pacific Records, and the first jazz album utilizing Hebrew, African and American music for Warner Brothers.

During the 1950s and the 1960s, Katz’s commercial composing ranged from TV commercials (Toni’s Adorn, Hunt’s Pork and Beans, Englander Mattress, and various beer commercials) to numerous TV series, including Checkmate, Grindl, Johnny Staccato, Hollywood Angel, Hollywood is my Town, Insight, Art in Your Life. Katz also scored several of Roger Corman’s films, including A Bucket of Blood (1959), The Wasp Woman (1959), Six Troop Attack (1960), The Little Shop of Horrors (1960), and Creature from the Haunted Sea (1961), among others.

Fred Katz’s classical works that utilize jazz and Hassidic heritage have been performed in Town Hall in New York as well as at the Bath Music Festival, Los Angeles Music Festival, and Oberlin Conservatory. Among his commissioned works are Song of Songs and The Jazz Hebraica, which were broadcast over KGIL and on CBS TV. His scores for The Little Prince and God’s Troubadour were performed for the Valyermo Festival at St. Andrew’s Priory. In the spring of 1992, Fred Katz participated in the Chico Hamilton Quintet Reunion concert tour, during which the group performed at all the major European jazz festivals and was enthusiastically received by appreciative European jazz fans. For many years Katz was professor of cultural anthropology at the California State University at Northridge, lecturing in ethnic music. Fred Katz died on September 7, 2013, in Santa Monica, California.

Katz’s music is represented on this concert by four compositions. The opening work, Hy The Man for flute and piano was written in 1983 for Katz’s son, Hyman, a student at Berklee School of Music. Granada, an improvisatory work for cello solo dating from 1956 is a veritable tour de force that reflects Katz’s prowess as a virtuoso. Two cello and piano duets will close the program: Overture and Summertime is the first movement and Katz’s virtuosic paraphrase-suite based on materials from Gershwin’s opera, Porgy and Bess, and Cello Sweet is a delightfully jazzy five-movement suite, with the traditional name for the genre was mischievously punned by the composer. 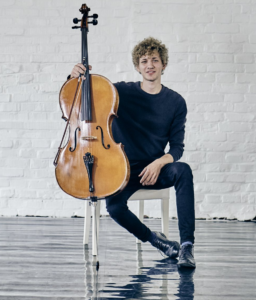 Cellist, chamber musician, and pedagogue, Paweł Czarakcziew made his stage debut at the age of six, performing at the Kraków Philharmonic. Four years later, at the Polish Embassy in Paris, he played his first concert as a soloist with the orchestra of the Academy of Music in Kraków under the baton of Professor Stanisław Krawczyński.

Czarakcziew is a scholarship holder of the Rector of the Academy of Music in Kraków and winner of the Educational Award of the Royal Capital City of Kraków. In 2022 he was awarded the 2022-2023 Fulbright Junior Research Award to conduct research at the University of Southern California in Los Angeles.

As a soloist, Czarakcziew appeared in concerts throughout Europe and on the West Coast. Interested in improvisation and jazz, he participated in a number of dance and theatre projects. He has co-founded the Cracow Harp Quintet and the Czarakcziew/Kowal Duo and made recordings with both groups. A Fulbright Fellow at USC during Fall 2022 semester, Czarakcziew currently is a PhD candidate at the Krzysztof Penderecki Academy of Music in Kraków. 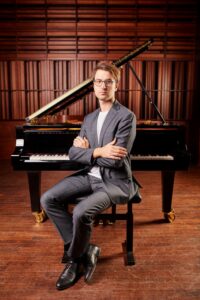 Pianist, chamber musician, and pedagogue, Piotr Kowal graduated with distinction from the Krzysztof Penderecki Academy of Music in Kraków in the piano class of Professor Andrzej Pikul. In 2018 he was awarded his doctoral degree, with a dissertation interpreting the works of Ludwig van Beethoven. His other piano teachers included Professors Konstanze Eickhorst and Aquiles Delle Vigne.

Laureate of many international piano competition, Kowal has concertized throughout Europe as soloist and chamber musician. Together with cellist Paweł Czarakcziew, he recently recorded an album of solo and chamber music by Joanna Bruzdowicz.

Since 2015, Kowal taught and headed the Piano Department at the Rutkowski Primary and Secondary Music School in Kraków, and since 2016 has served as an assistant professor at the Piano Department of the Krzysztof Penderecki Academy of Music in Kraków. He also teaches a piano class as at the International Courses of Music Interpretation in Nowy Sącz. Piotr Kowal is the 2022 Creative Scholarship recipient from the Polish Minister of Culture to promote the music of Joanna Bruzdowicz. 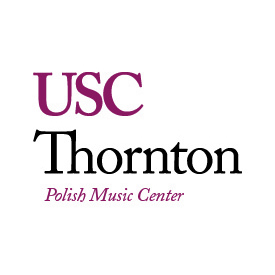