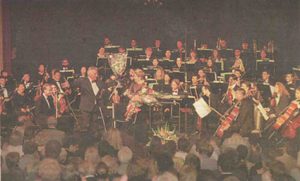 A contemporary Polish composer who is known for avoiding public attention—despite the unprecedented popular success of one of his works—claimed center stage at USC earlier this month. In his five-day residency, Henryk Górecki charmed a sold-out audience in Bovard Auditorium, enthralled music critics and captivated the student musicians of the USC Symphony.

“Górecki Autumn,” a celebration of his works organized by the School of Music, began with a solo and chamber music concert Wednesday, Oct. 1. The concert was followed by a lecture on Górecki’s music by Adrian Thomas, a professor at the University of Wales and the Provost’s Distinguished Visitor; a symposium on the “Górecki Phenomenon”; and a closing concert by the USC Contemporary Music Ensemble. The Festival’s centerpiece, however, was a rare public appearance Friday, Oct. 3, by Górecki, conducting the USC Symphony in a performance of his own Symphony No. 3—a work that has sold more than a million copies. In concert reviews, critics raved about Górecki’s passionate conducting, the responsiveness of the young musicians and the singing of soprano Elizabeth Hynes, a USC faculty member.

Górecki was at USC thanks to the efforts of several people: Stefan Wilk, a retired physician; his wife Wanda, who founded the USC Polish Music Reference Center; and Maria Anna Harley, the director of the center since last year. School of Music Dean, Larry J. Livingston, expanded the visit into the five-day event, and the school underwrote the expenses.

“It was a lot of hard work and very uncertain at times whether Górecki would come, but the visit was a huge success,” Harley said. “I’m extremely happy with Górecki Autumn itself and its positive consequences for the School of Music.” Harley plans to publish, in Polish and English, transcripts of the lecture, composition forum, and symposium, where Górecki participated in a Q-and-A session.

Górecki, who generally shuns the press, sat for a brief interview on Tuesday, Oct. 7, in order to share his impressions of his visit and publicly thank his hosts. The interview was conducted at the Polish Music Reference Center, known world-wide for its collection of manuscripts, scores and recordings of Polish music. Górecki, wearing his trademark workingman-style clothes, spoke animatedly about his stay in Los Angeles. Harley translated Górecki’s comments.

Q: The Friday concert at Bovard was wonderful. How was it to conduct a young orchestra, to work with a student orchestra?

A: It’s not the first time I’ve worked with a young orchestra, a young ensemble. I have had many different experiences working with young ensembles, and I like working with young people, I really like it. Sometimes I even prefer to work with a young orchestra rather than an old one…Should it be called an old orchestra, an adult orchestra? How should one call it? A professional orchestra? No, young musicians are professional—it’s just that the other guys are old!

Q: Can you give us your impressions of USC and the highlights of your visit?

A: Usually when I travel to different campuses, I feel jealous. I am jealous that there are so many things that we don’t have. It would be really wonderful to have something like USC in Poland. And I imagine that a young person who is truly willing to learn feels wonderful being in this environment on the campus. This person should enjoy being here, and if the student does not appreciate that—if he does not see that this university provides him with a fantastic opportunity for learning, I think that he is a moron! Such a student shouldn’t be here. I can’t say anything about the professors because I did not have the time to meet many people, but looking at the campus from outside, as it were, during these few days, all I can say is that it’s a wonderful thing to have.

Q: What was your impression of the first concert at the festival, the chamber concert? I read that it was brilliant.

A: Wonderful musicians! Perfect performances! It was fantastic! It’s only a pity that there was no air conditioning at the first concert; this caused difficulties in enjoying the first concert.
What should be said and emphasized is that I am deeply grateful for the work of the conductor who prepared the orchestra for me. My sincere, heartfelt thanks to Jung-Ho Pak [music director of the USC Symphony]! I say it now because there was no time to thank him right after the concert. It was all very chaotic and I was very, very tired and oblivious to anything but the music. It was a real pleasure, it was all my pleasure to work with these young, fantastic musicians. It was great fun for me.

Q: I’ve heard that you love mountains. I know that we’ve had smog in the last few days and it was hard to see ours, but did you go up into the mountains? Have you been able to travel around Los Angeles?

A: I saw the mountains and I visited these mountains. Today you could see all the mountains from the Wilks’ house. On Saturday I went to Malibu—also to the mountains where there is the St. Francis of Assisi monastery. But these are different kinds of mountains than the ones in Poland; I will not say which ones are better, which ones are worse —I do not know. These mountains are just different! However, I couldn’t imagine that there were so many mountains and that they were so close to Los Angeles. I only saw from the plane all the space, the rock and sand, while flying from New York to L.A.—it is a huge stretch of desert and mountains. You should know, however, that I don’t live in the mountains. My house is in Katowice, in one of the most polluted industrial Polish towns, which could be compared to Buffalo or Pittsburgh. But all my free time I spend in the mountains.

Q: Will you come back to California or to USC to conduct again?

A: The fact that I’m here now, I owe this all to my friends, Wanda and Stefan Wilk and to Maria Anna Harley, who wrote desperate letters persuading me to come. So it is really thanks to our wonderful Wilks that I am here. We met for the first time a dozen years ago. They invited me to come then, but there were many obstacles. Finally, during our last short meeting in Zakopane [a mountain resort town and cultural center in south-central Poland] there was yet another invitation to come over. So I came. It is thanks to these three people that I’m here at USC. As a person who never loses hope, I should say that perhaps, maybe, it is not the last time. Perhaps you’d like to see me again! Then I will come with great pleasure.

[1]. This article was printed in the USC Chronicle, a bi-weekly newsletter for faculty and staff at the University of Southern California, 20 October 1997, back page with color photos. Photographs by Dana Ross. [Back]