Another batch of gifts from this summer’s travel to Poland includes a fascinating two-CD set of music by Polish composers from the late 19th and early 20th centuries. A project coordinated by the Polish Chamber Musicians’ Association [Stowarzyszenie Polskich Muzyków Kameralistów, or SPMK], this recording features rarely heard piano trios by Władysław Żeleński (1837-1921), Apolinary Szeluto (1884-1966) and Grzegorz Fitelberg (1879-1953). Alongside Karol Szymanowski, the most famous composer in the Young Poland group active in the early years of the 20th century, these chamber works by Fitelberg and Szeluto are especially interesting and still practically unknown.

Before devoting all of his energies to conducting, Grzegorz Fitelberg was a highly admired composer of such large-scale orchestral works as Pieśń o sokole, Op. 18 or Rapsodia polska, Op. 25. Completed around 1903 and dedicated to Emil Młynarski (one of the Warsaw Philharmonic’s founders and its first music director), Fitelberg’s Piano Trio in F minor, Op. 10, is an extensive and robust work in four broadly-drawn movements that occupy the entire Disc 2.

In turn, Disc 1 features Władysław Żeleński’s Piano Trio in E major, Op. 22, written during the 1870s and favorably reviewed by such authorities as Jan Kleczyński, a noted pianist and music critic, who was also an editor for a complete edition of Chopin’s works. Also on the same disc we find Apolinary Szeluto’s Piano Trio in D major, Op. 81, a work written probably around 1907 but lost shortly thereafter and recreated by the composer from memory over thirty years later.

All three piano trios found very sympathetic and competent performers who deliver them with just the right balance of insight and musical passion. Pianist Michał Francuz, violinist Joanna Konarzewska, and cellist Rafał Kwiatkowski accomplished here an admirable feat of bringing this fin-de-siècle music to life after a century of oblivion.

Many thanks to the SPMK for this very thoughtful gift! 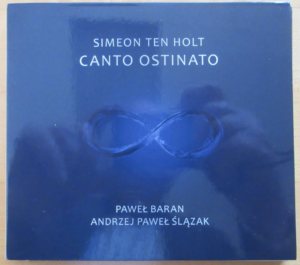 Another fascinating CD gifted to the PMC by pianist Andrzej Paweł Ślązak is devoted entirely to Canto ostinato, a work by Dutch minimalist composer, Simeon ten Holt (1923-2012). Written in the late 1970s for “any number of keyboard instruments,” it is usually presented by two to four performers who arrange 106 segments and their repetitions that make up Canto ostinato according to individual preferences. On this recording Maestro Ślązak is joined by another pianist and colleague, Paweł Baran. According to the program notes, “… the main objective of the performers… was to demonstrate the broad narrative of the piece … its dramatic nature and form [that necessitated] the reduction in the number of repetitions in some fragments.” As it is, this 45-minute presentation—a very personal and arguably courageous interpretation of this challenging work—brings much credit to both performers on this Opus Series CD, an imprint dedicated to publishing and promoting recordings of modern music. 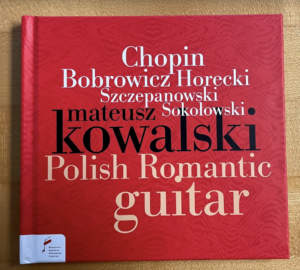 To receive the CD entitled Polish Romantic Guitar, all I had to do was to meet the PMC fans and generous supporters, Scott H. Whittle and Terry Tegnazian for dinner in town. Always on a lookout for interesting repertoire and performers, Scott and Terry presented me with this CD issued by Narodowy Instytut Fryderyka Chopina (NIFC). It features guitarist Mateusz Kowalski (b. 1995) in a truly fascinating selection of works by Jan Nepomucen Bobrowicz (1805-1881), Felix Horecki (1796-1870), Marek Konrad Sokołowski (1818-1883), and Stanisław Szczepanowski (1811-1877). Widely admired throughout Europe, all of these Polish composers were also exceptional guitar virtuosos. Although this instrument is usually associated with Spain’s musical culture, guitar was actually a very popular instrument in early 19th century Poland, where it accompanied numerous gatherings of poets, artists, and revolutionaries.

These composers also represent a very special guitar pedigree. Bobrowicz and Horecki were students of the great Mauro Giuliani, while Szczepanowski studied first with Horecki and later with the fabled Fernando Sor. In addition to several original solo works by Bobrowicz, he also authored guitar transcriptions of several Chopin’s Mazurkas that are represented on this CD. 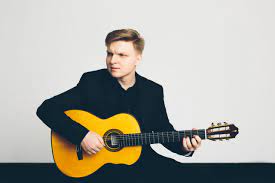 Another riveting item performed here by Maestro Kowalski is Szczepanowski’s Introduction et Variations Brillantes sur un Air National—or variations on the Polish National Anthem, Jeszcze Polska nie zginęła—that were heard for the first time in Paris in 1840 at a reception for one of Poland’s greatest poets, Adam Mickiewicz. Known as the “King of the Guitar,” Szczepanowski was a court guitarist to Queen Victoria, and court soloist for Queen Isabella II of Spain. He concertized throughout Europe and was an ardent patriot, whose bravery in the November 1830 Uprising was recognized with the Virtuti Military order.

With Mateusz Kowalski’s youthful energy and dedicated musicianship, this selection of early romantic music for guitar from Poland is a real treasure. Extensively annotated and illustrated booklet gives the much needed background on these little known composers and their fascinating works. It is a highly recommended item for any sound library, and we are very happy to add it to ours!

Many thanks, Scott and Terry!