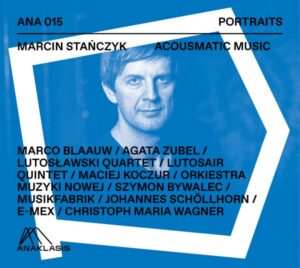 December is a time of gifts and we are very fortunate at the Polish Music Center to have so many dedicated and generous friends who think of us this time of year. Once again, PWM (Polish Music Publishers) and Editor-in-Chief Dr. Daniel Cichy rose to the top of the list with a donation of four CDs from PWM’s Anaklasis record label, featuring very rare contemporary music repertoire:

Throughout his long and distinguished career, Jan Krenz was recognized as an outstanding conductor all over the world. What is less well known is that Krenz was also an accomplished composer, with a substantial body of work to his name. Some of it was recorded on the label of the Polish Composers’ Union (ZKP), in the series entitled Portraits of Contemporary Polish Composers (polmic 156). On this CD Krenz is represented by his String Quartet No. 3 as well as his Second and Third Symphonies. Excellent program notes were provided for this recording by Grażyna Teodorowicz, a longtime friend of the Polish Music Center, who also donated this disc to our library. 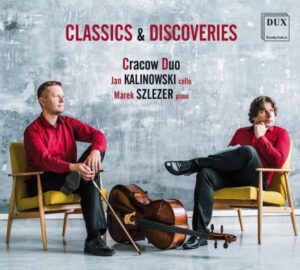 Talking about old friends, the not so old Cracow Duo—comprised of Marek Szlezer and Jan Kalinowski—just celebrated their twentieth anniversary of cooperative artistic activities. During the past decade they were PMC partners in many different musical projects and we’re certainly looking forward to continued cooperation with this excellent cello and piano ensemble. They recently presented us with their latest CD release on the DUX label, called Classics & Discoveries (DUX 1817), with an eclectic mix of works by Grażyna Bacewicz, José Bragato, Edward Elgar, Bohuslav Martinů, Astor Piazzolla, Sergei Rachmaninov, Ludomir Różycki, Camille Saint-Saëns, Robert Schumann, Zygmunt Stojowski, Karol Szymanowski, Heitor Villa-Lobos, and Władysław Żeleński. With such a wide choice of repertoire, anyone can find something suitable to hear in Cracow Duo’s inimitable interpretation.

Scott Whittle, a dedicated supporter of the Polish Music Center and the Paderewski Festival in Paso Robles, gave our library a Christmas present of two CDs, The Polish Violin, Vol. 1 and Vol. 2, published on the Chandos label. Violinist Jennifer Pike and pianist Petr Limonov are heard in another broad survey of Polish violin and piano repertoire with many well-known works by Grażyna Bacewicz, Mieczysław Karłowicz, Maurycy Moszkowski, Karol Szymanowski, and Henryk Wieniawski. However, of special interest on these recordings are two works by Irène-Régine Wieniawska, also known as Lady Irène Dean Paul or “Poldowski” when she appeared in concerts al across Europe. Wieniawska was (of course) the daughter of the great Henryk Wieniawski, who died when she was barely a year old. She studied music in Brussels, lived in England, and performed as pianist for Sir Henry Wood’s Proms concerts. Her Sonata in D minor for Violin and Piano (1912) is a confident work of a 32-year old composer. The other treat on this recording, Tango (dating from 1923—nine years before she died), was dedicated to Paweł Kochański and became a favorite encore of many violin virtuosi of that era.

Another recent gift was three recordings from Dr. Grzegorz Mania, President of the Polish Chamber Musicians’ Association (SPMK). The first is a two-CD album of Piano Trios by Grzegorz Fitelberg, Apolinary Szeluto and Władysław Żeleński issued on the SPMK label. The second is a CD of Songs for Voice and Piano by Zygmunt Stojowski, performed by Magdalena Molendowska and Julia Samojło and jointly published by DUX (7580) and SPMK (9). Finally, there is Polska na 4 Ręce, a delightful compilation of works for piano 4-hands by Ignacy Jan Paderewski, Juliusz Zarębski and Władysław Żeleński in performance by Dr. Grzegorz Mania and his piano partner, Dr. Piotr Różański. This recording represents another SPMK publication.

Violinist Alicja Śmietana has had distinguished career as a soloist and chamber musician with leading ensembles throughout Europe, and was recently performing with members of the SPMK in the Los Angeles area. She took this opportunity to present the PMC with two of her CDs on the Solo Musica label: Metamorphoses—an album of works for violin and chamber orchestra (SM 219), and a recording of violin and piano duets with pianist Evelyne Berezowsky (SM 176). The Metamorphoses recording features works by Arcangelo Corelli, Fritz Kreisler, Alfred Schnittke, and Antonio Vivaldi. Alicja’s partners on this album include maestro Pekka Kuusisto and the Extra Sounds Ensemble. Śmietana’s other album is composed of a rather eclectic repertoire, including Bach’s magnificent Partita in D minor, BWV 1004, Andre Previn’s Two Little Serenades, Glen Gould’s Sonata for Bassoon and Piano (in Ms. Śmietana’s arrangement), and Arvo Pärt’s Spiegel im Spiegel.

In another instance of rare repertoire, this time in the popular music realm, Przemysław Draheim from Toruńska Agenda Kulturalna presented the Polish Music Center with three HRPP Records LPs. These albums feature performances by the Alvon Johnson Blues Band, Bikini Live (a special edition to accompany a film screening at the Hard Rock Pamela Pub, or HRPP) and Gelo & Moskwa—Guma & Aberdeen and Maleo & Moskwa.

Having thus migrated to the realm of popular music, Tomasz Lerski—a distinguished author of encyclopedic books on the history of Syrena Record Company and Polish culture during the inter-war era—presented the PMC with a jazz band recording, Noc w wielkim mieście [Night in a Big City]. The recording features the Młynarski-Masecki Orchestra in a truly delightful repertoire of the 1930s hits by Paul Abraham, Shlomo Sekunda, Fanny Gordon, Tadeusz Górzyński, Henryk Wars, and Samuel Ferszko. Extensive liner notes by Mr. Lerski on each of the nine tracks provide a superb introduction and a proper mis-en-scène to the reinterpretation of this music by a modern and very gifted ensemble.

The Ave Arte Foundation presented the Eighth International Paderewski Festival in Warsaw on November 3-13, 2021. The Festival began with the inaugural concert on at the Royal Castle in Warsaw, followed by two chamber concerts on Nov. 4 – at the Chamber Hall of the National Philharmonic and the Wilanów Palace. A Nov. 6 concert at the suburban cultural center in Ursynów featured works by Chopin performed by pianists who did not make it to the final stage of the 2021 Chopin Competition in Warsaw. On Sunday, Nov. 7, a concert featuring works for harp and dedicated to very young children was held at the cultural center in the Saska Kępa district. Concerts on Nov. 8 honored Paderewski’s birthday and Cyprian Kamil Norwid’s bicentennial with a program of works by Paderewski, Shostakovich and Karłowicz. To conclude on Nov. 13, the Festival presented a program entitled “Jazz—Inspirations,” with an entertaining variety of repertoire and some creative remakes of Paderewski’s own music. Programs sent to the PMC by the Foundation will be added to our library.

To all our friends and donors—Thank you! Dziękujemy!