Long-time PMC partners at the Head Office of the State Archives (NDAP) organized an impressive and successful celebration of Ignacy Jan Paderewski’s centennial as Poland’s political leader. The opening was held November 18-20 under the title “Paderewski—król pianistów w świecie polityki” [Paderewski—the King of Pianists in a World of Politics] at Warsaw’s Hotel Bristol—a property developed and once owned by Paderewski. This three-day conference also included two concerts that accompanied the celebrations as well as the official unveiling of an exhibit at the Koszykowa branch of Warsaw Public Library.

The festivities opened on Monday, November 18 with a theatrical presentation by students from the Paderewski middle school in Julin, near Warsaw. Adam Zamoyski, author of many books on Polish and European history and one of Paderewski’s biographers, delivered the opening lecture.

Following the official opening of the conference, the Primuz String Quartet and mezzo-soprano Aneta Łukaszewicz presented a selection of Paderewski’s songs to texts by Catulle Mendès. Pianist and composer Krzesimir Dębski, well known for his prolific symphonic, chamber and film music scores, directed the entire ensemble. A very enthusiastic reception of the program by the audience led to an encore—one of the hit songs from Dębski’s many film soundtracks. 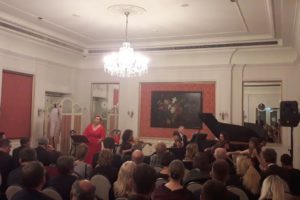 The imposing scope of scholarship presented at this gathering will be reflected in the proceeds from the conference that will be published by the State Archives during the coming year.

Another significant item on the program was the official unveiling of the Paderewski Exhibit at the Koszykowa Branch of Warsaw Public Library on November 19. After introductory remarks by Drs. Paweł Pietrzyk and Anna Krochmal (pictured below), the scholars and the public were given a tour with running commentary provided by. Dr. Krochmal. Beautifully laid out and designed on tall, square columns, the exhibit features rarely seen photos, documents and museum quality objects from over 20 Paderewski collections all across the world, including the PMC’s Paderewski Archive – the Paso Robles Collection. This exhibit will remain on display until late January 2020. 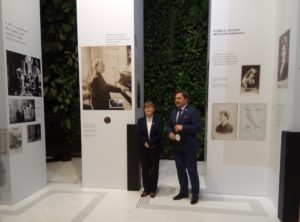 To accompany the conference, the Head Office of State Archives also produced a richly illustrated exhibit catalogue and a very elegant, clothbound 2020 calendar filled with information and facts from Paderewski’s life for almost every day in the coming year. The conference and the exhibit were extensively covered by local media and attended by a number of interested scholars and researchers. It was a very grand and fitting commemoration of Paderewski’s year at the helm of the newly independent nation.