At long last, in early April 2022 the Polish Music Center had the great honor of hosting Krzysztof Meyer, a distinguished composer and author, as well as a longtime and cherished friend. Originally invited as PMC’s Paderewski Lecturer in 2007, Meyer was denied the U.S. visa only a few days before his scheduled arrival in Los Angeles. In consequence, the Newman Hall concert on the USC campus fifteen years ago had to proceed with the printed version of Meyer’s lecture, rather than his in-person appearance. 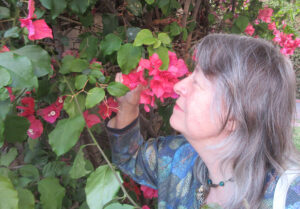 This time around, Krzysztof Meyer came to Los Angeles on a purely private visit and was accompanied by his wife, Danuta Gwizdalanka (shown at right), musicologist and author of over twenty books on Polish music. This was Meyer’s first sojourn in California and a well-deserved vacation after the completion of a recent opera commission from Warsaw’s Teatr Wielki.

Meyer’s long-anticipated visit to the Polish Music Center took place on April 5 and 6. The Maestro was particularly interested in PMC’s Manuscript Collection and first took a careful look at the previously donated manuscript of his 1970 opera, Cyberiada. Comprising of three beautifully calligraphed and elegantly bound volumes, this work is among the most fascinating and visually attractive in the PMC Manuscript Collection. The composer also surveyed his other manuscripts—Pezzo capriccioso per oboe ed pianoforte (1982), and Piano Concerto (1979)—and looked over several manuscript sketches, identifying heretofore unknown fragments from his string quartets and other concert works. 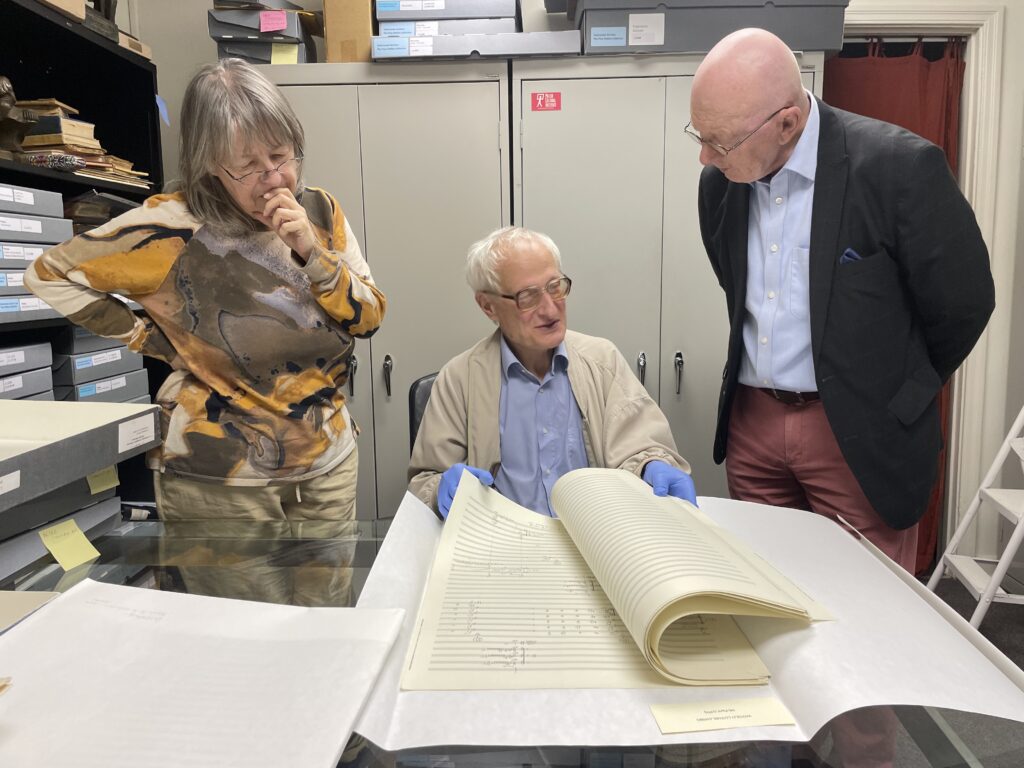 Of particular interest to Meyer, however, was the PMC’s collection of Witold Lutosławski’s manuscripts. He examined all of them—Paroles tissées, Preludia i fuga na 13 instrumentów smyczkowych, Mi-Parti, Novelette, Mini-Overture for Brass Quintet, and Trois poèmes d’Henri Michaux—with great interest and care (shown above), reminiscing about his close friendship with Lutosławski and remembering his visit with the composer just hours after he finished the orchestral score of the Novelette. 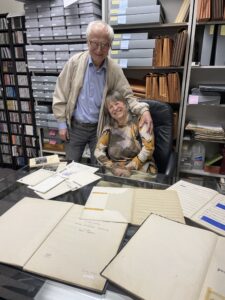 At the conclusion of his PMC visit, Krzysztof Meyer presented the PMC with four additional manuscripts. This very generous gesture (and a wonderful surprise for the PMC staff) extended our Manuscript Collection to include:

Maestro Meyer also brought thirteen CD recordings of his works that were added to the PMC sound library. They include the Naxos series of String Quartets (Nos. 1-13) recorded on four CDs by the Wieniawski String Quartet. Also included in the composer’s gift were eight DUX CDs with Meyer’s Creation of the World (DUX 0920), Early Works for the Orchestra (DUX 1166), Trio Op. 90 and Quintet Op. 66 (DUX 1290), Works for Choir and Orchestra (DUX 1408), New Chamber Music (DUX 1414), Songs Op. 116 and Symphony No. 8 Op. 111 (DUX 1569), Symphony No. 9 (DUX 1713), and Canti Amadei and Symphony No. 5 (DUX 1803). Finally, there was a WDR/The Cologne Broadcasts 2 CD album on Eda Records featuring pianist Christian Siebert in Meyer’s Six Piano Sonatas, Aphorisms, Op. 3 and Quasi una fantasia, Op. 104. 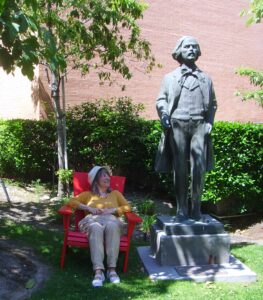 During their time on the USC campus, Krzysztof Meyer and Danuta Gwizdalanka also attended Prof. Lisa Cooper Vest’s class on Polish avant-garde music, and answered many questions posed by her students working on projects covering Polish contemporary music. Prof. Cooper Vest took the opportunity to present Meyer with a copy of her recently published book, Awangarda, and discussed the post-World War II music scene in Poland with Meyer and Gwizdalanka over the afternoon tea at the PMC. Our distinguished guests were also given a tour of the USC campus, with the inevitable photos next to the Paderewski monument and a quick visit to the USC Film School. 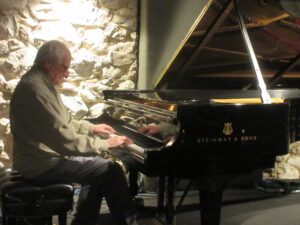 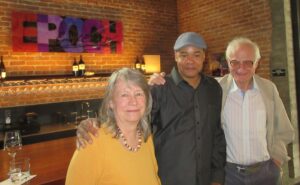 In preparation for her next book, Dantua Gwizdalanka was interested in Ignacy Jan Paderewski’s accomplishments as a wine connoisseur, consumer and producer. Thus, the couple visited Paso Robles, where Paderewski’s vineyards and traditions continue to be cultivated. They were generously hosted by the Cass family, whose Cass Winery was the first venue of the revived Paderewski Festival in 2006. Meyer and Gwizdalanka also visited Epoch Estate Wines (shown above right) for a fabulous wine tasting and a strong dose of history, learning about Epoch’s ties to Paderewski’s former vineyards and York Mountain Winery, the outfit that bottled Paderewski’s wine in the 1930s. 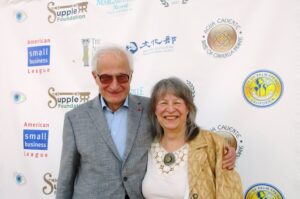 For many tourists, visiting California also means sightseeing Hollywood with its movie theatres and attending at least some film screenings. The opportunity to do so came with the invitation to the AmDocs Film Festival in Palm Springs, with Meyer and Gwizdalanka being hosted at the Gala Opening Ceremony by the Festival’s director, Teddy Grouya.

Two weeks and about four hundred photos later, Maestro Meyer and Danuta Gwizdalanka departed LAX for their permanent residence in Germany in late April. Certainly, there will be many happy memories—for them and for the PMC staff—after this truly extraordinary and event-packed visit. 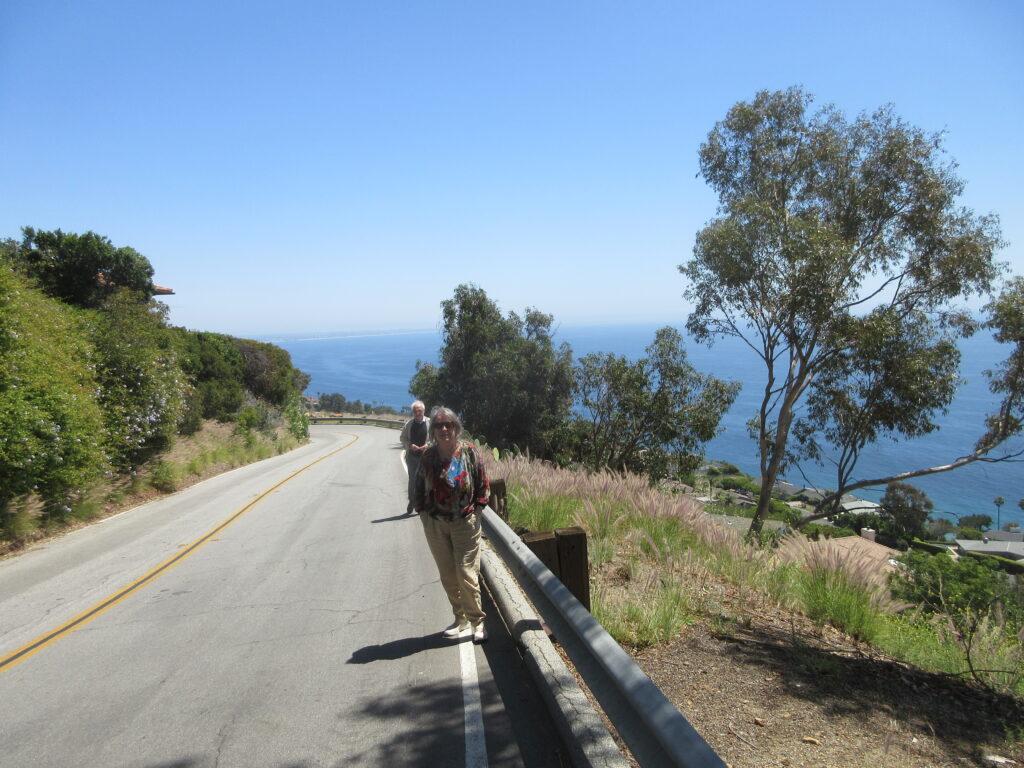